Old Bestseller: A Window in Thrums, by J. M. Barrie

A Window in Thrums, by J. M. Barrie

Everybody knows J. M. Barrie, right? But they know him almost exclusively for one work (and its offshoots): Peter Pan; or, The Boy Who Wouldn't Grow Up, a play first performed in 1904. (Barrie did produce a related novel, Peter and Wendy.) Some may have heard of his first bestseller, the novel The Little Minister (1891), or perhaps his play The Admirable Crichton. And some may have read something about Barrie's unusual and a bit creepy (but probably not criminal) relationship with the children who inspired the Peter Pan stories, the Llewellyn Davies family. Anyway, that's all I knew.

Barrie was born in 1860 in Kirriemuir, Scotland, the ninth of ten children, the son of a weaver. His life was formed in part by the death of his older brother at the age of 14, and his subsequent attempts to replace his brother in his mother's affection. Barrie wanted to become a writer from early days, but went to the University of Edinburgh at his family's urging. However, he continued to write, and had success with an early trio of books based on his childhood home and church. Kirriemuir became Thrums in these books. The first was Auld Licht Idylls, the second the book at hand, A Window in Thrums (1889), and the third The Little Minister. In his later career he concentrated mostly on the theater. He married an actress, Mary Ansell, but the marriage was apparently unconsummated, and he appears to have in some way truly desired to be "the boy who wouldn't grow up". He was made a Baronet in 1913. 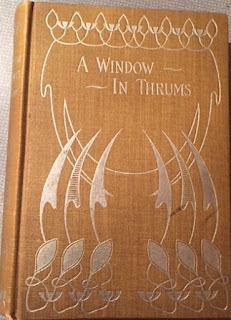 My copy of A Window in Thrums is an American reprint, in octavo size, probably from the 1890s, printed by the Chicago firm Donohue, Hennebery, and Co. It is inscribed, in a very nice hand, "A Merry Christmas from Santa Claus, 1899".

A Window in Thrums is told by a schoolteacher about village life in Thrums, from a perspective many years later than the action. The teacher lets a room from a poor family: Hendry McQumpha, a weaver, his wife Jess, and their daughter Leeby. Their son Jamie is a barber living in London, visiting once a year. Their other son, Joey, died in an accident very young. (There are parallels with Barrie's youth that are hard to miss.) Jess is portrayed as a nearly saintly woman -- she is crippled, and unable to move beyond the short walk from her bed to a chair by her window (the title window). She's portrayed as an intelligent woman, and a genius banker and embroiderer. Her husband is slower, but a hard working and honest man. Leeby is devoted to her mother, to the complete abnegation of her own identity.

All the above, I'm sure, is Barrie's intention, but, really, from another perspective Jess can be seen as a monster -- formed so perhaps by her disability and by the loss of her son, but still! -- she has all but enslaved her daughter, and she is all but psychopathic in her determination that Jamie shall never marry.

The book opens with a series of chapters that are really humourous sketches of life in Thrums -- the local comic is described, and theg gossip following the movements of the minister, or the appearance of any man with an eligible woman. There's an amusing account of the local "post" trying to get out of his engagement to a local woman -- unscuccessfully, of course. Much of this is amusing, somewhat sentimental, told in just enough Scots dialect (with English glosses) to give a pretty good flavor of things.

The book concludes with a long linked set of chapters detailing Jamie's relationship with his family, especially his sister, over the course of one of his visits. A key incident is Jess stealing a glove her son seems to treasure -- she's convinced it belongs to a sweetheart, and that just won't do. Jamie goes back to London, and tragedy strikes -- Leeby dies of a fever, and Hendry and Jess follow not long after, and then we see Jamie's fate -- apparently betrayed by a woman (no details are given) -- seemingly driven mad by the loss of his family and by his own guilt.

Most of the book, then, is minor work, not terribly exciting, but sometimes amusing, and sometimes interesting in its portrayal of Scots village life in the middle of the 19th Century. But I was a bit put off by the conclusion, and its absolute rejection of the idea that Jamie might meet and have a good life with a woman from outside the village. It really seems a reflection of Barrie's apparent fear of sex.