Today is Nick Mamatas' birthday. He's one of the most interesting, and most politically-engaged, writers working these days. Here's a collection of my reviews of his short fiction, plus a very brief capsule of his first novel, Move Under Ground, from 2004, that I wrote for my SFF Net newsgroup.

Next a brand new electronic publication, planned to appear quarterly, available either as an e-book or (in delayed fashion) on the web: Son and Foe. The first issue, November 2005, contains a generous mix of reprints and originals. The best of the originals are surprisingly good, frankly better than I expected for a new online publication. My favorite is by Nick Mamatas, “Real People Slash”, written as if a memoir of a few years in the life of “Nick Mamatas” – and frankly pretty convincing and involving purely as memoir (true or not). But the story takes a strange, and effective, turn into Lovecraftian paranoia.

Also very weird is Nick Mamatas’s “The Uncanny Valley”, in which a psychiatrist tries to deal with – I think! – the dangerous unconscious of uploaded post-human intelligences, which appear to be destroying the world.

Flytrap #7 includes, stealthily, a shocking and effective story by Nick Mamatas, “Solidarity Forever”, about a vain couple who decide that the best expression of their progressive pieties is to have sex with (i.e. rape) the most oppressed person they can find: a prisoner in Africa dying of AIDS.

Weird Tales for July/August has a couple of striking pieces. Nick Mamatas is mordantly funny in “Mainevermontnewhampshiremass” in telling of a horror writer returning to his home town somewhere in the Northeast to battle a terrible menace – as it turns out in company with many other horror writers, and as it turns out … well, read the story.

Nick Mamatas, in “North Shore Friday” (Asimov's, April-May), mixes a secret history of a government project to read minds with attempts in the 1960s to smuggle Greek refugees into the US and get them safely married off. The narrator, from decades in the future, remembers one sad incident, when one such operation went a bit wrong. The story nicely mixes the slightly mad idea of the mind reading operation with the interesting story of the refugees with an effective, subtly told, story of the narrator’s crush on a girl involved in the immigration activities.

The Mammoth Book of Steampunk, edited by Sean Wallace, includes five original stories (and a large selection of good recent work). All the originals are worthy of attention. The best is “Arbeitskraft”, by Nick Mamatas, set in alternate Victorian London, and told by Friedrich Engels, who is using Difference Engine technology – advanced, in his factory, to a “Dialectical Engine” – to recreate his late friend Karl Marx. Engels dreams of using this technology to liberate the workers, with the help of the Dialectical Engine version of Marx. At the same time he encounters terribly oppressed girls from a match factory, and sees how the steampunk tech of this alternate history has affected their lives. The story is, obviously, politically engaged, and also full of interesting steampunkish notions, and some action as well.

Bloody Fabulous is an anthology, about even mixed between new stories and reprints, on the subject of fashion. It's entertaining throughout. My favorite original piece came from Nick Mamatas: “Avant-n00b”, about a young fashion blogger who stumbles across a very strange “vintage” piece of clothing that turns out to have links to Vichy France.

Capsule Review of Move Under Ground (from my blog) 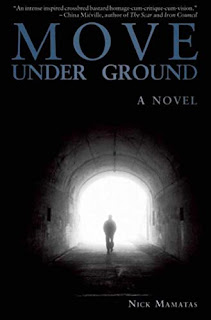 Another small press book is Nick Mamatas's Move Under Ground, the first novel by a writer who has done some pretty good shorter stuff in recent years, mostly what we used to call slipstream [though as I recall Nick rejected that term], often with a horror tinge. (In fact, Mamatas too can be linked with the New Weirdos. [grin]) Move Under Ground is from Night Shade Books.

It's got a high concept premise -- Jack Kerouac meets Lovecraft. That is, the novel is set in the early 60s, and Jack Kerouac is mysteriously enlisted to wage a battle against the denizens of R'lyeh, which has risen in the Pacific. People are turning into beetlemen, horrible cults are forming, mysterious things happening. Kerouac tracks down Neal Cassady and starts to head cross country from Big Sur and then San Francisco, destination New York. Along the way he picks up William S. Burroughs, and spends a little time in Burroughs's home town -- my place of residence, St. Louis. (I think he muffed the local geography a bit, but perhaps in 1962 or so he was right.)

I found much of the book interesting, but about as much kind of slow. Perhaps it would have helped if I was more knowledgeable about either the Beats or Lovecraft -- as it happens, I've read very little in either area. The writing is  quite nice, with plenty of exotic and original images.
Posted by Rich Horton at 6:44 PM