Today is Karen Joy Fowler's birthday. She is another particular favorite of mine -- and, too, a favorite of my wife's! Somwhat curiously, perhaps, her output is divided between her short fiction, which is mostly SF or Fantasy; and her novels, which are mostly not obviously fantastical (though quite often there is an ambiguous aspect to them.) Here's a selection of my reviews of her short fiction from Locus -- not a long list as I wasn't writing reviews when she wrote such earlier masterpieces as "Game Night at the Fox and Goose" -- augmented with my blog post about The Jane Austen Book Club, perhaps her best-known novel thanks to the film.

There are some very strong stories in Sci Fiction for July.  "What I Didn't See" is the first short piece I've seen by Karen Joy Fowler in some time.  Like her novels, it perches on genre boundaries, only SF if the reader insists: why bother?  Enjoy the excellent story: about a 1928 trip to Africa in 1928 to hunt gorillas.  What results is a tangle of human missteps: sexual competition, gender stereotyping, racial tension, the quest for personal aggrandizement, misplaced revenge motives, all leading to an ambiguous ending with a hint of an echo of Tiptree's "The Women Men Don't See" (said echo surely reinforced by the title).

In the Conjunctions New Wave Fabulists issue, Karen Joy Fowler's "The Further Adventures of the Invisible Man" (again, not SF) is a delightful story of a boy growing up with his single mother, and games, baseball, and bullies – but best of all is Fowler's always absorbing wry voice.

April-May is also time for the Asimov’s Double Issue, this one particularly special as celebrating the magazine’s 30th anniversary. The TOC is chock full of familiar names who briefly comment on their history with the magazine. They all do fine work, but the standout is a very welcome return by an author who has been concentrating on novels – mainstream novels, yet! – in recent years, the wonderful Karen Joy Fowler. “Always”, like her Nebula winner “What I Didn’t See”, might annoy SF purists because it’s not necessarily SF (though it MIGHT be) – no matter to me, it’s an excellent story. A young woman and her new husband, in 1930s California, are seduced by a cult that promises immortality. We know it’s a cult because, as her mother says, “a cult is just a set of rules that lets certain men get laid”. In this case, the cult’s leader, who is the only man the women can sleep with. Not surprisingly, the narrator’s husband leaves. But she is consoled a little by the fact that the leader is pretty good in bed – and more by the carrot of immortality, which she somehow never can reject. It is witty and intelligent and honest and believable and not quite sad somehow.

The most influential of these, and the longest lived – the model for new millennium SF ‘zines in many ways, is Lady Churchill’s Rosebud Wristlet. The current issue is #20,'''... Karen Joy Fowler’s “The Last Worders” is brilliant work from one of my favorite writers. Twin women are on vacation in Europe, in an odd place called San Margais, built on a deep, empty chasm. The story concerns the women’s search for The Last Word Café (“Poetry Slam. To the Death”.). But they are also working out an apparent lifelong sibling rivalry. And they are tracking down a boy they both had a crush on at school, a boy who may be about to perform at the Café.  Arch, mysterious – dealing with poetry and sisterhood and politics in a subtle ways.

Subterranean’s Summer issue is a special YA issue, guest edited by Gwenda Bond. It is chock full of first rate work. Karen Joy Fowler’s “Younger Women” is a sharp look at the lure of vampires, elegantly refracted through the lens of a mother’s exasperation with her besotted teenaged daughter – exasperation given an edge by her husband having recently decamped with a younger woman.

There’s a whole lot of tasty stuff in the May-June Asimov’s. Let’s begin with a new story from Karen Joy Fowler. “Persephone of the Crows” is just wrenchingly brilliant, in a specific mode that reminds me of a few stories I talked about last week – it’s a story that uses apparently true (in story terms) fantastical elements in service of character examination, and in so doing resolves itself without really resolving any of the questions the fantastical elements might inspire. Which, to a devoted reader of the fantastic, like, say me, can be in a way disappointing. But on its own terms I think this story delivers. Polly is a 10-year old girl at a littler girl’s house, and the little girl claims to have seen a real fairy. Polly is envious of the other girl for lots of reasons – money is one, parents are another, and Polly’s wishes for something better in her life only intensify that night – until the drive home, when her drunken father loses control of the car – and things get strange. Be careful what you wish for, perhaps? Though that sounds a bit facile – the story doesn’t quite go where you expect it to, and in the end we have a sharp portrayal of its main character and a sad look at her perception of her family. 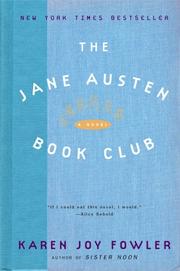 I suppose I am one of the last folks in these parts to have read Karen Joy Fowler's new novel. The Jane Austen Book Club, indeed, is proving a surprising success in the wider literary world -- it has receive approving reviews just about everywhere, and it was #7 on the last New York Times Book Review bestseller list. I myself have had success in proselytizing for Fowler -- I made my wife read Sarah Canary several years ago and she has happily read all of Fowler's novels since. (My wife is not an SF reader.) In the case of this book my wife read it first, hence the delay in me getting to it. And having finished it we passed it along to a friend of ours, who had just finished the last book we gave her: The Time-Traveler's Wife.

Just yesterday, right underneath their adoring review of Spiderman 2, the St. Louis Post-Dispatch featured an article about Karen Joy Fowler and The Jane Austen Book Club. Fowler had just signed the book at my local Border's -- alas, this article was the first I heard of this! I'd have gone (it's even possible Fowler would recognize my name, either from Locus or from my occasional emails regarding the Tiptree Award). The writer of the article mentions Fowler's science fiction roots, a bit bemusedly but not condescendingly, though she (the article writer) does seem surprised at the connection between Austen and SF readers. [Having missed that chance of meeting Fowler, Mary Ann and I finally met her at the 2017 World Fantasy Convention in San Antonio.]

I thoroughly enjoyed The Jane Austen Book Club, I will say. The story is about the six members of a book club devoted to Austen, and the book has chapters loosely linked to each book. Five of the members are women. Bernadette is a woman in her 60s, several times married, who was once a dancer in a low-level sort of off-vaudeville group. Jocelyn is a 50ish woman, a dog breeder, never married herself but an inveterate matchmaker. Sylvia is Jocelyn's long-time friend, whose husband has just left her for a younger woman. Allegra is Sylvia's lesbian daughter, her relationship also just breaking up (her girlfriend having mined her life for stories). Prudie is a 30ish schoolteacher. The one man is Grigg, a computer tech and a science fiction fan, who seems only just now to be reading Austen for the first time.

The story is witty, both sweet and tart. The characters are perfectly captured. The writing is full of allusions to Austen, big and small. There is some discussion of the books, but much more of each character's personal history and how their own personal lives play out over the time of the novel -- with incipient romances, breakups, reunitings, disasters, and unexpected reversals. It echoes Austen in being quiet and somewhat domestic in tone, and of course in its irony and above all wit. Though irony and wit have been characteristics of Fowler from the first!
Posted by Rich Horton at 6:33 PM