Old Bestseller Review: Snowdrift and other stories, by Georgette Heyer

Snowdrift and other stories, by Georgette Heyer

When I was a teenager I read every one of Georgette Heyer's Regency romances, and her other romances and historicals (except for My Lord John), and her mysteries, as well. I also read 1 1/2 of her early contemporary novels, but I gave up on them, finding them truly dire. I've reread some of my favorites among the romances on occasion since that time. (My favorites are, I suppose, Sylvester, Sprig Muslin, Frederica, Arabella, and These Old Shades. Probably a couple more could be fit in there.) 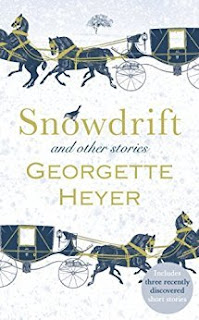 So I was surprised to see, at Sally Kobee's booth at Boskone a couple of weeks ago, a Heyer book I didn't recognize: Snowdrift and other stories. It turns out, however, that this is a slight expansion of her only story collection, which I read back in the day under the title Pistols for Two. This book adds three "recently discovered" stories to the 11 that appeared in the first collection. Apparently she wrote nearly two dozen short stories all told -- I suspect the stories not reprinted have contemporary settings. The book seems to have been assembled by Jennifer Kloester, who has written two books about Heyer, including a biography. She also provides an introduction.

Heyer was a novelist, and these short stories don't show her at her best. But they are by and large cute and enjoyable, if implausible and often vaguely unsatisfying. She just doesn't have time to unspool the sort of plot she could do at greater length, and, more importantly, she couldn't really make the inevitable end of story realizations that the two main characters are destined to be together very convincing. Falling in love at first sight is a romance convention, but the fun of many of Heyer's books is that even if the characters do fall in love at first sight (and they usually do not) it takes them a few hundred pages to realize it. Herein they mostly have to be ready to get married within 20 pages.

(The last three stories on that list are the "recent discoveries".)

There are a couple of duels, several elopements (though nobody actually reaches Gretna Green), and lots of 30-something men falling in love with and quickly claiming girls of 19 or so. There are also a couple of cases of older men and older women getting together (that is, men in their late 30s or 40s, women in the mid to late 20s -- in one case, a widow well into her 30s, though!) -- I have always liked those better in principle, in her novels as well as these stories -- the women are more mature, more even matches for the men. The cases where men almost twice the age of the girl heroines marry them seem problematic -- and it's worse in these short stories, where there is really no established relationship -- the characters don't know much about each other except that they like the other's looks, and maybe that they are decent to talk to for a few minutes. But there you are -- that's the nature of the genre, I suppose.

As I said, though I found these stories less satisfying than Heyer's novels, they were still enjoyable. The conversation is often amusing. The plots are simple, but in at least a couple of cases there are cute twists. It is amusing as a reader to guess from the beginning what's going to happen -- amusing but generally fairly easy. Certainly a minor part of Heyer's oeuvre, and likely only for completists, but if you are a fan, these are worth your time.
Posted by Rich Horton at 6:57 PM