Thomas M. Disch was born on Groundhog Day, 1940, and so he'd have been 79 today. Sadly, he died (suicide) in 2008. He was one of the most interesting and incisive writers and critics of his time. I felt some sort of tribute in order. Unfortunately, most of what I've written about him is from very early in his career, with just a couple of snippets from later. So this doesn't cover my favorites among his work: the novel Camp Concentration, and stories like "The Asian Shore" and "Things Lost".

(I've also previously posted my review of his one Ace Double, Mankind Under the Leash.)

Let's discuss the three Tom Disch stories first. Three? Yes, of course, because "Dobbin Thorpe" was a pseudonym Disch used for three stories in Amazing and Fantastic -- the two here, and one of his classics, "Now is Forever" (Amazing, March 1964). "Death Before Dishonor" is a brief mordant story about a somewhat loose young woman who fools around with a tattoo artist one night, and also gets a tattoo -- which proves a problem when the main she's promised to be faithful to sees it. The conclusion is horrific but a bit unconvincing -- really, this is not Disch at his best at all. "Minnesota Gothic" is rather better. Another story in the horror mode, about a young girl who encounters a woman she becomes convinced is a witch. Especially when she finds the woman's dead brother ... not so dead. But the little girl has powers too, which in the hands of an amoral little girl might be pretty scary. Finally, "A Thesis on Social Forms and Social Controls in the U. S. A." is a mock essay supposedly produced towards the middle of the 21st Century which suggests satirically the form of society at that time, explicitly riffing on Orwell's dicta from 1984: "Freedom is Slavery, Ignorance is Strength, War is Peace" and adding "Life is Death, Love is Hate", with such notions as compulsory slavery every fifth year for adults aged 21 to 51. It's a pretty decent piece of pure Dischian satire.

Finally, a major story by a major writer. Wait a minute, you might say: Dobbin Thorpe? Who he? Well, Dobbin Thorpe was a pseudonym used by Thomas M. Disch for three early stories that appeared in Amazing and Fantastic. I have no idea why he used a pseudonym. He was a Goldsmith discovery: with Zelazny and Le Guin one of the really significant writers nurtured in her magazines, and many other Disch stories appeared in Amazing or Fantastic under his own name.

“Now is Forever” was probably Disch’s first story to make a real splash. It was reprinted in the first Wollheim/Carr World’s Best SF, under Disch’s real name. (“Descending”, later that year in Fantastic, is probably even more significant, and it was reprinted in Judith Merril’s Year’s Best.) “Now is Forever” considers a theme taken up by many writers, notably Damon Knight: the disastrous effects of a matter replicator on the economy, and indeed on humanity. It follows Charles Archold, a banker who has, of course, been ruined by the ability of anyone to make anything with a replicator (called a Reprostat here). He comes to his bank, talks with his old black janitor Lester Timburly, finds the place squatted in by nihilistic teens, is pressed to open the safe with all the money, as the teens dance and party and plan to die … Things come to a wholly plausible dark conclusion, with Charles’ wife Nora and the janitor Lester and the teens and Charles himself all deluded in their own ways by the meaninglessness of this life of easy abundance. The story stumbles a bit towards the end, telling too much perhaps, but then twists the knife nicely at the close.

Finally, Disch's "Dangerous Flags", subtitled "Another Adventure of the Green Magician", is early Disch, very satirical but not really to as good effect as he was it his best. For one thing, the satire is unrelieved by any sympathy for its target, or any understanding -- it ends up thumpingly unconvincing. A small town has a problem with Coal Gas seeping into its cellars, and the Green Magician offers a solution. But a nasty teacher objects, and kills the Green Magician -- which doesn't go at all well, for her or for the town.

The final two stories are from major authors, and are both quite good. They are also on the same theme, more or less: overpopulation. I often joke that it was a law that every issue of a '50s magazine had to have a story about atomic war or its aftermath. (I say I joke, but try it sometime -- it really does seem like very nearly every SF magazine issue from the '50s had at least one such story.) Now I'm thinking that from the mid-60s through the early '70s there was perhaps a similar law about overpopulation. At any rate, here we have an excellent story from Thomas M. Disch, "Problems of Creativeness" (9500 words), which became part of his novel 334. Birdie Ludd is a not very intelligent young man whose girlfriend want to get married and have a baby. But only people with sufficient education, creativeness, or otherwise demonstrated worth to society, are allowed to have children. Birdie is, not to sugarcoat things, pretty stupid, and not creative at all. The story follows his attempts to demonstrate creativeness, after his failure at college ...

Disch's piece, "Torah! Torah! Torah!: Three Bible Tales for the Third Millennium" (F&SF, April), takes a skewed, revisionist, look at "The Naming of the Birds", "A Case of Child Abuse" (the sacrifice of Isaac, of course), and "Jahweh's Wife" – or, why we never hear of her.  These pieces are clever and funny, as well as slyly pointed.

Capsule on The Dreams Our Stuff is Made Of 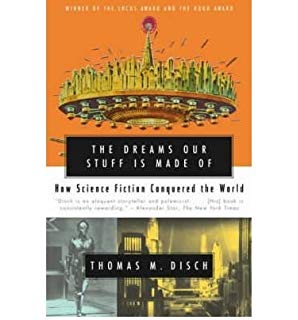 A few years ago Thomas M. Disch published The Dreams Our Stuff is Made Of, a critical review of the history of SF and of SF's cultural position. The book got a lot of notice, and I believe it even won a Hugo. I hadn't read it until just now. I think it's a fairly entertaining and interesting book. Disch's main thesis is that SF has fully permeated American Culture, and that much of the wackier elements of American culture can be laid at SF's doorstop. I don't think he really makes his case fully -- he does a fair amount of cherry-picking in his choice of SF books to analyze. And the book is full of mostly tiny but annoying errors -- things like getting dates and publications sequences wrong. Every so often he seems to have plainly misread a book -- his take on Banks' Culture, for instance, seems particularly wrongheaded. All that said, he makes some interesting points that are worth thinking about, and his critical view of various books is often illuminating. And some of his personal stories, often a bit catty, are quite fun as well.  I found his story of the collaboration technique of Walt and Leigh Richmond particularly amusing -- apparently Walt would sit in the room with Leigh, and telepathically transmit his story ideas to her, while she would type up the result.  Hmmmf! (Gardner Dozois used to recount the same story about the Richmonds.)
Posted by Rich Horton at 11:39 AM