Georges Simenon was born on this date (February 13) in 1903. He died in 1986. He's by far most famous for his novels about the Paris based Inspector Maigret, of which he wrote dozens, but he wrote a great many more crime novels, almost all heavily focussed on the psychology of the criminal. Many of the non-Maigret novels are quite highly regarded, but I confess a great fondness for the Maigrets. I've read almost all of them. Here are shortish looks at four of the Maigret novels.

The Bar on the Seine, by Georges Simenon 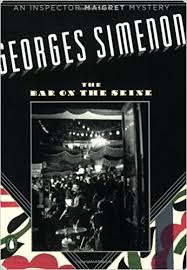 It has been quite a long time since I read a Maigret novel. It seemed that I had exhausted those that had been translated into English, though it was hard to be sure. I saw a new Penguin edition, curiously sized, of a book that seemed at first unfamiliar. This was called The Bar on the Seine, translated by David Watson from a 1931 book called La Guingette a Deux Sous.

Well, it turns out I had read the book. It had been translated in 1940 by Geoffrey Sainsbury, and published variously in English as Guingette by the Seine, A Spot by the Seine, and Maigret and the Tavern by the Seine. (I had a 1990 Harcourt Brace paperback under the latter title.) But no matter -- I didn't remember it, so I reread it, with only the occasional intimations of familiarity -- for the most part it felt new.

Maigret visits a gangster who is about to be executed, and the man hints that he knew of a murderer, from 6 years before, who frequented a bar called La Guingette a Deux Sous. Maigret has little luck finding this, until he stumbles across a man who mentions his plan to visit this tavern -- a man who, Maigret learns, is also arranging as assignation with his mistress. Maigret finds his way to the tavern, where he finds the man (a successful coal merchant) with his wife, and also the man's mistress and her husband, a struggling haberdasher, and a varied cast of characters, including a talkative heavy-drinking Englishman, and several more folks. It seems the mistress is a rackety woman who has had affairs with several of the regulars at this tavern -- and that her husband has used this knowledge to blackmail some of her lovers. So it is perhaps not a surprise when the sorry blackmailer is shot -- and when his wife's latest lover, the coal merchant, is found with a gun.

The man escapes, and Maigret tries to track him down. Meanwhile the Englishman strikes up a relationship of sorts with Maigret, while at the same time all but flaunting his attempts to help the escaped coal merchant. And Maigret learns some of the details of the haberdasher's arrangements, including his involvement with a moneylender who disappeared, significantly, six years before -- just when the gangster Maigret had talked to had hinted at knowledge of a murder. Maigret is very dissatisfied with the obvious shape of the case -- something is going on. Which of course he discovers. What works -- quite brilliantly -- in this book, one of the earliest Maigrets, is the eventually displayed, quite convincing, quite sad, character of the actual murderer. Some of the early Maigrets seem uncharacteristic of the series to me -- Maigret is at times almost an action hero -- but in this case the story reads very much like later Maigret, with the main interest being the psychology of the murderer and other related figures. 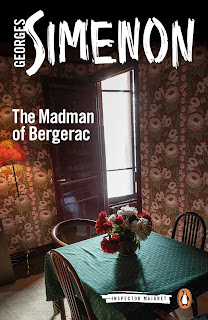 The Madman of Bergerac, by Georges Simenon

Penguin have been rereleasing some older Maigret novels by Georges Simenon. They are retitling them, which can be confusing  -- the last one I bought was a book I'd already read, in a different edition and translation. (Though I was still glad to reread it -- it has been a while.) But now I have found a Maigret that is completely new to me: The Madman of Bergerac. This novel dates to 1932 (as Le Fou de Bergerac), and was published in English as part of a 1952 omnibus called Maigret Goes South. But I had not yet read it.

As with much early Maigret, he engages in much more personal action than became typical. He is traveling to Bordeaux for a quasi-vacation -- there is some trivial police business to clear up but he also wants to visit a retired colleague. But in his compartment there is a mysterious man, in some distress, and when the man jumps off the train, Maigret jumps off after him. The man shoots Maigret in the shoulder, and Maigret ends up recuperating in a hotel in the town of Bergerac.

He learns that there have been a number of attacks on young women in Bergerac -- a couple have been murdered, another woman fought off her attacker. These have been attributed to a madman believed to be living in the woods -- and indeed they assume it is this madman who attacked Maigret.

The rest of the novel consists of Maigret investigating these crimes from his hotel bed -- shades of Rear Window! Maigret ruffles feathers by treating several prominent locals as suspects. And (with Madame Maigret's help) he uncovers evidence of a "white slavery" ring, and a local man engaged in an affair with his sister-in-law, and another man secretly acquiring pornography. His old friend even turns out to be fooling around with a young lady ... as ever in the Maigret novels, everyone has secrets. There really is a madman, it turns out -- but there are also more serious crimes going on. It's not a great Maigret novel, but it's pretty decent.

Maigret in Montmartre, by Georges Simenon 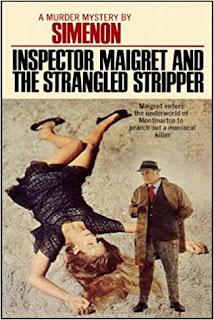 Several years ago I read every one of Georges Simenon's Maigret mysteries that I could track down. I'm fairly sure a few early ones may still elude me, but mostly I think I've read the complete set available in English. But I ran across a book called Inspector Maigret and the Strangled Stripper in a used book store. I didn't remember the title, so I bought it and read it. While reading it, every so often things seemed familiar, but I really couldn't remember the basic plot.

It turns out that I had read this book under a different title: Maigret in Montmartre. That title seems to be of the UK translation, by Daphne Woodward. The copy I just bought is a 1964 reprinting of a 1955 Signet edition, translated by Cornelia Schaeffer for the American market. The book itself was first published in the US in hardcover in 1954, probably first published in 1950 in France. (It was written while Maigret was living in the US in 1950.) The French title was Maigret au Picratt's (Maigret at Picratt's). That title refers to the bar in Montmartre at which the stripper of the American title worked. A cursory glance at the two translations convinced me that Woodward's was considerably superior.

The story involves a stripper with a mysterious past (she uses a false identity card) who comes to the police with a story of a planned murder of a Countess. But the next day it is the stripper who turns up strangled. Soon enough a Countess is found dead as well. The stripper was involved with a young man who, we quickly guess, is one of Maigret's young assistants. Maigret must unravel the secret of her past, and of the Countess's past, to solve the crime. The actual solution is a bit over-obvious, and also I was confused a bit by how the stripper got involved with the bad guy, and how she started on her unsavory career. Simenon seems more interested in the psychosexual aspects of the case, and in particular he lingers somewhat on the stripper's enjoyment of her job, and of sex -- in a way that I found odd and not terribly believable (and which made me think too of the stories of Simenon's own rather odd sex life).

The Methods of Maigret, by Georges Simenon 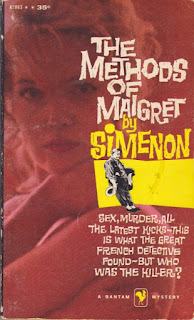 I read, as I believe, pretty much all of the Maigret novels several years ago. But not long ago I ran across a used paperback called The Methods of Maigret, which didn't seem entirely familiar. It was really cheap, so I figured what the heck. I'm still not sure if I read it before -- one aspect seems very familiar: the book features a Scotland Yard detective following Maigret in order to learn his "methods". But the setting and the crime didn't ring any bells. I have to suspect that I did indeed read it, but forgot it enough that I could read it again with the same enjoyment as the first time! Ah, the benefits of aging!

Here Maigret is summoned to Porquerolles, a small island off the French coast in the Mediterranean. A small time crook with whom Maigret had had dealings in the past has been murdered, shortly after brandishing a letter from Maigret and bragging of his relationship. One working theory is that the man was killed by a local crook who so hated Maigret that he was driven to a rage ... but that really seems silly.

Maigret spends a few days on the island, worrying about how his English colleague will perceive his rather methodless methods. This place seems to attract people who have more or less stopped worrying about life, who just want to drift. There are a couple of English people, including an older woman with a French gigolo. There is a Dutch artist with a young Belgian girl as his mistress. There is an old woman and her also fairly old son, who run a number of brothels on the coast. It turns out one of these brothels is now run by the former girlfriend of the murdered man, a woman who Maigret more or less saved ... occasioning the letter that the man had kept. Plus a few natives, including a local crook who is eager to reassure Maigret as to where he stands.

Maigret soon gathers that the murdered man had some potentially valuable information, and many of those lurking seem to hope to find out what it was to make use of it themselves. And he eventually works his way to the solution, which is reasonably sensible, a bit sordid, and which, as often in these stories, leads to a somewhat resignedly sad ending: justice is served, more or less, but the wake of these criminal acts leads to further tragedy.