Muriel Spark was born Muriel Camberg on February 1, 1918, and died at the age of 88 in 2006. She was born in Edinburgh, lived in Rhodesia after her marriage to Sidney Spark in 1937, and left him and their infant son after realizing that her husband was prone to violence. She returned to England in 1944. She began writing poetry and literary criticism after the War, and her first novel appeared in 1957. She may still be best known for her 1961 short novel (most of her novels were quite short) The Prime of Miss Jean Brodie. Besides that novel, my favorites among her books are Memento Mori and Loitering With Intent. 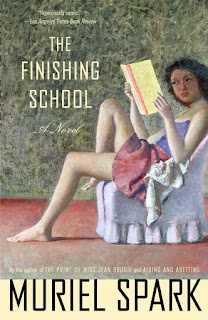 Muriel Spark wrote strong novels up to the end of her life. Her last novel appeared when she was 86. This is The Finishing School. Like most of her novels, it is very short (in the neighborhood of 30,000 words), and sardonic in tone. It invites comparison with her most famous novel, The Prime of Miss Jean Brodie, in being about a school and about the relationship of a teacher to the students. Indeed, the review I read in the Atlantic Monthly at the time it first appeared continued from its discussion of The Finishing School into a long reconsideration of The Prime of Miss Jean Brodie.

The Finishing School is set at College Sunrise, a school run by Rowland Mahler, a 29 year old who had a long ago success with a play and is now frustratedly trying to write a novel, and his wife Nina Parker. The school moves each term -- in part, it is suggested, to escape bill collectors. It is in Switzerland this term. There are nine students, apparently all around 17 years old, presumably having finished high school or the European equivalent, and now being "finished" -- either to head on to University or to other pursuits. One of the students, Chris, is writing an historical novel about Mary Queen of Scots.

The fulcrum of the novel is Rowland's jealousy of Chris. It becomes clear that this jealousy, ostensibly of the likely smashing success of his novel, has a homoerotic component. (Even though both parties are apparently heterosexual -- Rowland is married, though his wife is having an affair and plans to leave him, while Chris seduces several women during the course of the book.) Rowland spends much of his time fantasizing about killing Chris. Chris, meanwhile, ignores his classes, writes his novel in secret, and entertains visits from publishers and film producers.

Flitting around this central conflict are the problems of the other students and staff. One girl plans to become a minister (shades of the nun-to-be in Prime), another's father is suspected of smuggling, a couple are trying to arrange to get married to one or another of the boy students. The staff are involved as well, sleeping with the students on occasion, and planning their own futures. And the neighbors, a young woman and her somewhat older nephew, are also drawn into the intrigue.

It is told, as ever with Spark, in a very spare fashion. Several months pass quickly, odd people are described doing odd things in the most deadpan of fashions, and by the end we know them fairly well and we know their fates. It is dryly funny, enjoyable to read and archly believable despite all the unusual characters. It is not, I think, nearly as good as Spark's best work -- in part it is not really about as much, I don't think -- but it is a fine piece of fiction.
Posted by Rich Horton at 4:39 PM