Today is Jonathan Lethem's birthday. And this gives me an opportunity to repost a review that is fairly important to me, not because it's a great piece of writing or anything, but because it's the first thing I wrote with some hope of professional publication. I wrote it in response to a note in, I think, Book Pages, asking for a Science Fiction reviewer. The date, according to my records, was 16 November 1995. They sent my a nice note back saying they liked it, but they weren't quite sure ... so they must have gone with someone else.

It's pretty short, which is because I was writing to their expected length. 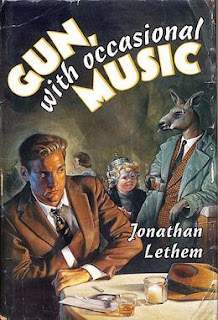 Jonathan Lethem is a rather new writer whose stories have been appearing in Asimov's, Pulphouse and elsewhere over the past few years. His short fiction has shown outstanding range, and a quirky imagination. His first novel, Gun, with Occasional Music, amply demonstrates both these qualities.The novel concerns Conrad Metcalf, a down-at-heels Private Inquisitor in mid-21sty century Oakland. He is drawn into investigating the murder of an affluent doctor with gangster ties, and becomes involved with shady cops, gangland figures, and beautiful women with questionable pasts. Thus, at the surface, this is a straight-forward pastiche of the standard hard-boiled detective novel, transposed into the next century. At this level, the novel works fine: the mystery is sufficiently absorbing and has enough twists to carry the plot, and Lethem has the first-person narrative down very well, with the "typical" hard-boiled attitude.

However, this is more than a standard SF take on Chandler. The SF elements themselves, though not terribly plausible, are interesting and thought-provoking, and well-integrated with the structure and themes of the novel. These include universal drug use for (fairly precise) control of emotional states, wildly extrapolated privacy laws, babyheads (children with vastly accelerated mental growth but normal physical growth), and intelligent, self-aware animals (the result of "evolution therapy"). Some of these tropes are use to generate jokes, but for the most part they support and reinforce the central story and the themes in which Lethem is interested. Ultimately, this is a serious, funny-sad novel, and at the heart of it are big questions about memory and the nature of personality. (These questions, and other elements of the novel such as the drug use, are very reminiscent of the work of Philip K. Dick.) Lethem handles the mixture of moods excellently, and the resolution to his story is perfect and satisfying. This is a very exciting first novel from one of the most promising new SF writers of the past few years.
Posted by Rich Horton at 2:17 PM