Yesterday, January 12, was the 51st birthday of Van Allen Plexico. I've gotten to know Van a bit over the past few years at conventions, expecially Archon, and as it happens we've twice been v/i/c/t/i/m/s contestants on Jim Yelton's Geek Universe Trivia Thunderdome, episodes of which Jim occasionally records at cons like Archon. Last fall we were "celebrity" contestants. I lost. Van finished second, to Wyatt Weed, a St. Louis-based writer/director. (In fact, Wyatt directed Four Color Eulogy, in which my son had a tiny role.)

At Archon I also bought a copy of Van's new novel, Vegas Heist, release in 2018 from White Rocket Books. Yesterday I did a lot of cleaning of my library, and one thing that surfaced was Vegas Heist. Whey I realized it was Van's birthday, I figured I ought to read it, and so I have. 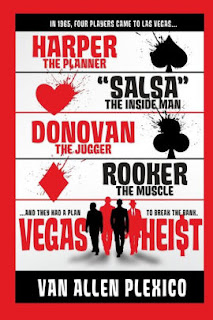 Much of Van's fiction is SF or Fantasy, but Vegas Heist is a crime story, indeed a caper story, set in 1965. John Harper is a career criminal, and as the story opens he gets a call from a man named Salsa, with whom he's worked before. They decide to meet in St. Louis to plan the job. With a jugger (safebreaker) named Donovan, they begin by robbing an engineer in the St. Louis suburbs (hey, I'm an engineer in the St. Louis suburbs!) The engineer is known to be a gun nut, and the goal is to get some arms that can't be traced to them. Then it's on to Las Vegas, Salsa's home base. Salsa has heard that Caesar's Palace, which is just about to open, will have a bunch of money in their safe the night before the opening, and he's also heard about a secret underground passage into the safe's location.

There are complications, of course. For one thing, the engineer in St. Louis, who had interrupted their job and got knocked out for his pains, had heard a clue that allowed him to figure out the jugger's identity, and he's learned that he'll be in Las Vegas, so he's headed there along with a large portion of his personal arsenal. Secondly, while Salsa has heard some of the details of the secret passage's location, he doesn't know enough, and he has to try to finagle the remaining details from the widow of the contractor who was working on Caesar's Palace before his recent accidental (?) death. (This proves more fun than Salsa expected after he realized the widow is a former showgirl and recent trophy wife.) There's also the matter of the thuggish and undependable fourth member of their team, hired as additional muscle. And finally there's Salsa's original informant, who turns out to be (though Harper's team doesn't know his) in the play of a rival casino owner who wants to embarrass Caesar's Palace, and who certainly doesn't want any loose ends left alive after the job is done.

The story moves at a breakneck pace, as Harper's team works out their plan, as their unforeseen antagonists also maneuver, and as some unavoidable missteps place them in danger of detection by law enforcement. It's exciting stuff, well-schemed, with the expected cynical humor dotting things. This is a fun fast read, with additional fillips for people in my position such as the view of my city as the Arch is being erected, and such as the Tuckerization of a certain Jim Yelton as a hapless security guard.
Posted by Rich Horton at 5:07 PM