Old "Bestseller": The Flower Beneath the Foot (and two other novels), by Ronald Firbank

Capsule Looks at The Flower Beneath the Foot (and two other novels), by Ronald Firbank

Ronald Firbank was born January 17, 1886. He was one of the oddest and most original writers of the early 20th century -- his works are rather decadent, rather campy, quite funny, and not like any other writer I know. In memory of his birthday, here's some short things I wrote about a few of his novels (and one minor short story) a number of years ago.

A very different sort of comedy is practiced by Ronald Firbank. Firbank was a Roman Catholic Englishman of considerable independent means (his father was a railroad tycoon), who lived from 1886 to 1926. Firbank was also homosexual, and apparently terribly impractical, and quite shy. He wrote several novels, a few short stories and a play, starting in about 1907. He published the novels at his own expense, partly because they are so odd, partly, I think, because he couldn't really be bothered dealing with business details. But even during his life he gained considerable notice, and even had one strong seller in the US, with his novel Sorrow in Sunlight, retitled Prancing N****r by his American publisher in an apparently successful attempt to gain notice.

Firbank's novels are fey, highly mannered, creations, essentially comedies of manners, but the "manners" tend to be rather unusual. I'd read several of his novels a few years ago, but I just got a copy of the Complete Firbank, and I decided to reread some of them.

1. The Flower Beneath the Foot 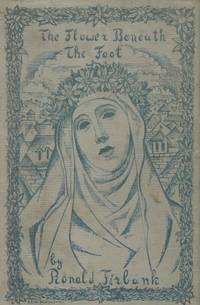 I began with The Flower Beneath the Foot (1923). This story is set in the fictional country of Pisuerga, and its plot turns on the love affair between the Crown Prince Yousef and one Laura Nazianzi. But Laura is not highly placed enough to satisfy the King and Queen, who are pushing for a marriage to an English Princess. All seems conventional enough, but of course the plot such as it is has nothing really to do with the novel.

It's all really about conversations, wicked conversations. Firbank is among other things a very cruel writer -- his characters die, fail in love, and most of all are shown up as being very very silly. They also occasionally have funny names like Sir Somebody Something or Madame Wetme. One character has a favorite Shakespeare play -- "Julia Sees Her". Many of the women are intriguing to seduce other women, one way or another. Even Laura Nazianzi seems more excited by the prospect of returning to the convent and her special friend (complete with birch rod) than by the prospect of a relationship with Prince Yousef. It's all very arch, and terribly witty, and quite funny but perhaps best appreciated in smallish doses -- which is OK because this novel, as with all of Firbank, is pretty short.

Valmouth, a rather short novel, is apparently generally regarded as Firbank's best, and at any rate I like it the best of his work that I've read.  It's set in a seaside resort, among a varied group of characters, most of whom seem to be over 100 years old, maybe even 150 or so. The plot concerns the plans of the son of one of the women to marry a "foreign" woman, and the effects of this plan on his mother and his previous lover, also there is a side plot concerning the vague  attempts of one of the older women to seduce a young farmer.  But the plot is nothing really, just an excuse to listen in on the various outre characters. The pleasure is derived from the delicate double-entendres buried in almost every line of dialogue -- concerning masochism, madness, fooling around with priests, etc.

"Odette" on the other hand, a very early story, shows almost nothing of what Firbank would become -- it's a silly and sentimental and moralistic short piece about a young orphan who encounters a prostitute and perhaps effects a change in her life.

I read another Ronald Firbank "novel", The Artificial Princess, a story of about 20,000 words completed in 1915 but not published until 1934, several years after Firbank's death. All Firbank is slight in terms of plot, but this seems slighter than usual. It concerns a very young Princess (17) of a fictional country that seems closely to resemble England. The Princess has
a somewhat older companion, the Baroness. She sends her on a mission to a potential lover, but the Devil intervenes and the Baroness encounters a potential lover of her own. The action closes at a play written by another member of the court, the Mistress of the Robes, with encounters for the Princess and Baroness both in the offing.

Feather light, its attractions result from Firbank's characteristic fey description and arch dialogue. Still, it seems rather a lesser work than the other Firbank novels I have read. (Perhaps it is not a surprise the Firbank did not publish it in his lifetime.)
Posted by Rich Horton at 5:44 PM