The Anthologist, by Nicholson Baker

Today Nicholson Baker turns 62. In his honor, I've exhumed this review from my old blog.

I should say to begin with that Nicholson Baker is a favorite novelist of mine. His first novel, The Mezzanine, remains my favorite among his works, but I've never been disappointed, except perhaps by The Fermata. (Though I have not read Human Smoke, his most recent nonfiction book, nor the novel House of Holes, and I probably won't .) 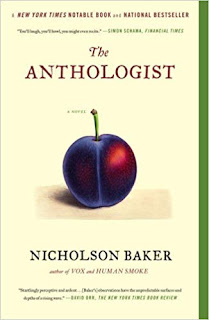 The anthologist of the title is the first-person narrator, a poet name Paul Chowder, who had some early success (including a Guggenheim), but has fallen on hard times in his career. Chowder has compiled an anthology, called Only Rhyme, a collection of rhymed poetry. However he has become blocked on writing the introduction. Partly out of frustration at his fecklessness in this effort, his long time girlfriend, Roz, has left him.

The book covers a few weeks of his life. (A long time period for a Baker novel -- The Mezzanine took about an hour, Vox however long a phone sex call takes, Room Temperature about 20 minutes.) In his personal life Chowder spends most of his time cat vacuuming -- that is, avoiding writing. He cleans out his office. He mows his lawn. He helps a neighbor put in a floor. And he moons over Roz, even visiting her a few times, especially when he suffers a minor hand injury. He gives a reading. He renews his passport. And he attends a conference in Switzerland.

Around all this he discusses his theories about poetry. Chowder is a strong advocate of rhyme (as his anthology's title suggests). He's also a strong believer that the fundamental rhythm of English poetry is the four beat line of the ballad. Metric theory (iambs and anapests and all) is a distraction. Iambic pentameter is a mistake. Free verse even more so. (Yet he constantly mentions how good some free verse poems are -- and, ironically, he admits that he himself can't rhyme very well.) It's all quite well argued, with excellent examples. Even if you disagree, it's very entertaining. (Assuming you like poetry.)

Aside from those details of plot and theme, the book is just very nicely written. Baker is a wonderful, funny, writer of prose, and a great observer of details. (For instance, he complains about something I've complained about -- the way it is so hard to tell which side is up on a USB connector.) Prose example: talking about Horace meant when he wrote "carpe diem" -- not exactly "seize the day" but pluck it: "Pluck the cranberry or blueberry of the day tenderly free without damaging it, is what Horace meant -- pick the day, harvest the day, reap the day, mow the day, forage the day. Don't freaking grape the day in your fist like a burger at a fairground and take a big chomping bite out of it. That's not the kind of man Horace was." Not the best, nor most euphonious, passage I could have chosen, but it gives a good sense of the rhythm and light humor and knowledge of the book. Highly recommended.

[This novel appeared in 2009. Another novel about Paul Chowder, Travelling Sprinkler, appeared in 2013.]
Posted by Rich Horton at 5:03 PM