I'm trying to get to as many of the really prominent turn of the 20th Century bestseller writers as I can (except for Thomas Dixon), and I knew I would have to get to Elizabeth Von Arnim sometime. She is most famous, even now, for her first novel, Elizabeth and her German Garden (1898), a lightly satirical novel about an Englishwoman trying to adjust to life in German high society after her marriage, and also trying to grow a garden. It was so successful that her most common byline was "By the author of Elizabeth and her German Garden", eventually just "By Elizabeth".

In fact, though, Elizabeth Von Arnim was born Mary Annette Beauchamp in Australia in 1866. One of her cousins, Katherine Mansfield Beauchamp, is better known as the great writer Katherine Mansfield. Mary was raised in England from the age of three, and 1891 married the Graf Von Arnim, and moved to Germany with her husband. The marriage was not a success, though they had five children. The Graf was abusive and strict, and also constantly in debt, eventually going to prison. Elizabeth and her German Garden was quite autobiographical, though probably somewhat softened. After she divorced her first husband, Elizabeth had an affair with H. G. Wells, then married Bertrand Russell's brother, becoming a Countess in the process. (Of course, a Graf and an Earl are of roughly the same rank.) That marriage also failed, and Elizabeth moved to the United States for a time, and died there in 1941. Two of her novels (Mr. Skeffington and The Enchanted April) were made into Academy Award-nominated films, some 5 decades apart. 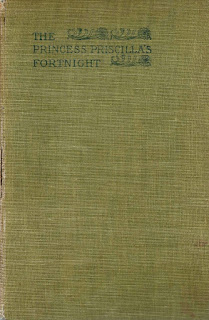 The Princess Priscilla's Fortnight was published in 1905. My edition is possibly a First, published by Smith, Elder & Co. of London. It is inscribed Lillian G. Baukart, Nov. 1905; and also has an Ex Libris sticker from one Robert W. Dickerman. It was also made into a film, The Runaway Princess, in 1929.

Priscilla is the daughter of the Grand Duke of a German principality. She is too intelligent for her own good, apparently, and also quite beautiful, but she has refused all offers of marriage, preferring to study poetry with her tutor and English teacher, Herr Fritzing, called Fritzi. After one more, particularly eligible, suitor asks for her hand, she decides to flee to England and live in poverty, nurturing her soul. Herr Fritzing agrees to help.

And so they flee, with a maid and some of Fritzi's money. By sheer luck they make their way to the village of Symford. And they start -- quite innocently -- causing trouble. They insist on buying two cottages from the woman who runs the place, Lady Shuttlesworth. But the cottages are occupied, so Fritzing pays for new cottages to be built for those expelled. And Priscilla is noticed by two young men, Lady Shuttlesworth's poetically minded and frail son Augustus, and the Vicar's son, Robin. Both fall desperately in love with her.

Meanwhile, Priscilla is beneficently giving the poor people around her money. This offends the Vicar's wife, a rather horrible person. The same woman is really annoyed when Priscilla throws a party for the local children -- on a Sunday! And neither Priscilla nor Fritzing has the faintest idea of how to run a household without an army of competent servants -- and the maid they took with them, Annalise, is disgusted by their position, and begins to conspire against them.

Disasters begin to pile up (including a murder). Priscilla and Fritzing go hungry, and are terribly uncomfortable. Priscilla is forced to reject the attentions of Augustus and Robin -- both young men think she is beautiful but poor, and she instead treats them as any Princess would treat young men of nothing like her rank who dare to try to court her. So, quite soon Priscilla and Fritzi are in despair -- and out of money -- until an unexpected person (unexpectd, that is, by everyone but the reader) turns up to rescue the situation.

It's, well, OK in its way. Sometimes gently funny, sometimes a bit too much. Terribly classist -- Von Arnim, a noblewoman herself, is quite comfortable with Priscilla's assumption of all the privilege a Princess must be due. But at the same time Von Arnim is acutely aware of how foolish the Princess really is. All ends happily enough (except for the murdered woman). It goes on perhaps a bit long, and the gentle satire is enjoyable sometimes and at other times a bit wearing. Still and all, I'm glad I read it.
Posted by Rich Horton at 7:08 PM