Today is Tobias Buckell's 40th birthday. He's one of the most consistently interesting writers to debut in this millennium, and I'm please to offer this set of my Locus reviews of his stories, that goes back as far as 2002 and includes stories from this year.

And new John W. Campbell Award nominee for Best New Writer Tobias S. Buckell also present a neat (if not completely new) idea in "A Green Thumb" (Analog, July/August): cars are "grown" from greatly altered trees.  Buckell embeds this idea in a fairly conventional story about a boy dealing with his single father.  It's nothing earth-shattering, but nice enough.

Baen’s Universe in April ... best this issue is Tobias R. Buckell’s “Manumission”, which gives a bit of backstory for one of the main characters in his novels. The man is a chemically enforced slave for a future company on an Earth isolated by aliens who control the secrets of star flight. His latest mission is to assassinate a woman trying to escape the company. Naturally he might like to escape as well, but the company has ways to keep him in line – including, possibly, his memories. The story is exciting adventure, and a good pendant to Buckell’s novels.

I was saddened to hear of Martin H. Greenberg’s recent passing. He brought more new stories to print than any non-magazine editor of recent decades, and surely his efforts rivaled the likes of Schmidt and Dozois for prolificity. His DAW anthologies were uneven, but occasionally featured jewels, and I was thrilled to find such a jewel in Hot and Steamy, which is subtitled “Tales of Steampunk Romance” and coedited by Jean Rabe. The story I loved was Tobias S. Buckell’s “Love Comes to Abyssal City”, which has an intriguing setting: an underground city ruled by AIs who have decreed limits in technology to, essentially, “steampunk” levels. The heroine is one of those charged with protecting her society from the intrusion of dangerous ideas from other such cities, and she is also awaiting her arranged marriage to the man the city’s AIs deem most suitable. The broad outlines of what will happen are obvious, but Buckell lets them unwind nicely, with plenty of neat ideas about the nature of the Abyssal City holding our interest.

And Fireside is a new magazine edited by Brian White, with the aim of publishing good stories from all genres. The first issue is pretty solid, with my favorite story being Tobias S. Buckell's “Press Enter to Execute”, about a hired killer whose jobs are, apparently, crowdsourced. His targets, he thinks, are spammers – until he is pushed to look a little closer, and realizes that he's been a little naïve. Buckell lets us guiltily revel a bit in the sort of fantasies many Internet users have doubtless had, then looks at where vigilante justice really leads – and adds an Sfnal twist. 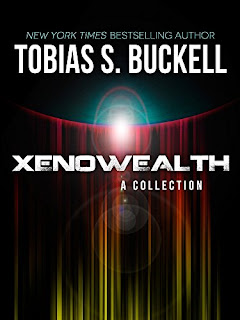 Tobias Buckell has published four novels and a number of short stories set in fascinating interstellar future collectively called the Xenowealth. He's been mostly concentrating on other projects lately, so the appearance of Xenowealth: A Collection, is welcome. It comprises all the Xenowealth short fiction published to date, with two new stories. I thought "Ratcatcher" particularly good, as it follows Pepper, the series' most important character, on a desperate mission through vacuum to a wormhole-traversing train, where he hopes to confront a brutal alien killer but instead must deal with a bitter veteran cop who knows something of his violent history. Cool future tech and powerful action mix very well.

John Joseph Adams’ newest anthology, mostly originals, is called Cosmic Powers, and it comprises short Space Operatic tales. Fitting the scope of Space Opera into short stories can be hard, but these stories do it pretty well.  “Zen and the Art of Starship Maintenance”, by Tobias Buckell, one example. A starship maintenance robot, after a successful battle, by happenstance rescues a CEO of the enemy fleet, and finds himself inveigled/bribed/coerced into rendering assistance. The story turns on the complex intersection of intriguing speculation about AIs and identity, economics, contract law, moral law, free will and orbital mechanics. In other words, really cool stuff.

Patreon continues to be a way for some writers to publish their short fiction, and I keep my eyes on a few writers whose work I like. One such is Tobias Buckell, whose “Shoggoths in Traffic” is a clever Lovecraftian crime story, in which a couple of people steal (repossess!) a car from a drug dealer and try to take it to Miami – but on the way run into a weird highway exit and a biker magician and – well, you’ll not think of cloverleafs and other traffic patterns in quite the same way after this!

Overview: Stories of the Stratosphere is one of those now fairly common anthologies one might call futurological: rather pedagogically aimed at very near future technology. In this case it’s specifically aimed at one narrow technological innovation: balloons in the stratosphere, and their potential uses in such areas as surveillance. The stories (which grew out of a conference called the Stratosphere Narrative Hackathon, which associated teams of scientist, artists, and writers to discuss specific ideas) are all rather short, and sometimes a bit schematic. The best, probably because it offers the most action, is “High Awareness”, by David Brin and Tobias Buckell, in which Noriko Chen takes a dangerous trip to the central “Stratollite” in a constellation she designed, to try to figure out how it seems to have been hacked – and then to make a dramatic attempt at gathering the necessary data and then returning to Earth.

Tobias Buckell’s “A World to Die For” is a parallel worlds tale, opening in an environmentally collapsed future, a milieu reminding me of Mad Max. The gang Che runs with is stopped by another gang that wants a trade – Che for some solar panels. That seems strange and pretty scary, but things get stranger when she meets a man who says she’s been rescued from an attempt on her life, and stranger still when she meets herself, and realizes she’s rattling through a variety of parallel worlds, in wildly varying states of environmental health. The story drives – perhaps a bit too didactically – towards a morally convicted resolution.