Tobias Buckell turns 40 today, and in his honor, I've compiled a set of my Locus reviews of his short fiction; and I've also resurrected this review that I did for my old blog back in the day, of his second novel. 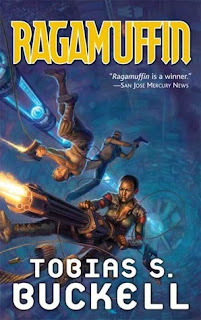 Ragamuffin is Tobias S. Buckell's second novel, and it is a direct sequel to his first, Crystal Rain. However it does not seem at first a sequel, as the action begins on Pitt's Cross, as a mysterious woman named Nashara escapes the human reservation there. Indeed, we learn a lot about the larger universe of Buckell's future, stuff only hinted at in Crystal Rain. Humans are generally kept in near or literal slavery by a variety of powerful alien races, all apparently under the control of the Satraps, trilobite-like aliens who use mind control on their subjects. The Satraps (a bit like Walter Jon Williams' Shan, rulers of the Praxis) greatly restrict technological development, and humans are a particular offender in this sphere. Three human worlds, at least, are isolated behind closed wormholes: Earth, Nashara's home planet of Chimson, and New Anegada (the Nanagada of Crystal Rain). Humans in the Satrapy are controlled by a human group called Hongguo, who police tech advancement and create mind-controlled slaves using Satrapy equipment. Nashara herself is a "Ragamuffin", one of an isolated group of space pirates or independent traders, depending on point of view -- but she is also a special creation -- a clone who, along with her sisters, has had her brain (or some interface equipment to it) seeded with, in essence, a virus that might allow copies of her to take over ships controlled by agents of the Satrapy.

Nashara starts to make her difficult way towards the Ragamuffin base, or perhaps to Chimson or Nanagada. On the way, she encounters a human habitat being destroyed, and she learns that the Satraps seem to have, possibly, changed their attitude towards humans, from tolerating them in a limited fashion to planning to exterminate them. And she runs into a somewhat nontraditional member of the Hongguo, who has his own plans for the coming changes ...

Meanwhile, as they say, back on Nanagada, a brief period of peace for the heroes of Crystal Rain ends with the return of the nasty aliens called the Teotl, who are worshipped as gods by an Aztec-derived faction on the planet, complete with human sacrifice. But these Teotl want to talk to John, and to Pepper, both of them very long-lived and artificially enhanced people who were trapped on Nanagada when the wormhole closed. It seems the wormhole has been reopened, and the Teotl are fleeing other aliens -- the Satraps, basically, I think -- who also want to exterminate THEM. Perhaps humans and the Teotl can make common cause, despite complete mistrust? Perhaps they NEED to!

I really enjoyed the book. There are a couple of faults -- on occasion the prose gets a bit careless, a bit rushed. And the ending seemed to come just a bit too quickly -- though of course it's not a final ending, there are more books coming in the series! But it was great fun to read, and I find this future a really enjoyable space operatic future -- it pushes a lot of my buttons. The action is exciting -- the bad guys are bad but not quite cartoons -- the good guys are ambiguous and make mistakes -- the SFnal ideas are fun (if not for the most part all that original) -- and I'm really looking forward to upcoming books.
Posted by Rich Horton at 4:29 PM