Lloyd Alexander was born January 30, 1924. He died in 2007. He is best known for his Chronicles of Prydain, a five book series beginning with The Book of Three. (A not very successful movie from Disney's dark period, The Black Cauldron, was based on these books.)

These were absolutely foundational YA books for me -- I adored them, read them multiple times. Taran Wanderer was my favorite. They are based (a bit loosely) on the Mabinogion cycle, in a sense the Matter of Wales. I didn't know any of that when I was young, mind you. And, curiously, I didn't read anything else by Alexander. I haven't reread the Prydain books -- I should, and I suspect they hold up just fine.

Anyway, I finally got to his next most famous (I think) series a couple of decades back. These are the Westmark books. In honor of his birthday, here's what I posted about the second book of that series on my SFF Net newsgroup back then.

A while back I read Westmark, by Lloyd Alexander. That was a YA book et in an imaginary kingdom, at a time roughly corresponding to, oh, the 17th Century? [The following paragraphs will contain spoilers for Westmark.] A young man from a provincial town ends up in trouble with the evil minister of the distracted King: the minister is suppressing freedom of the press, and the young man is a printer's devil.  When his boss gets arrested, he barely escapes, and wanders throughout the country (called Westmark), learning much.  He makes friends with a fiery revolutionary, and with a beggar girl. (The reason the King is distracted, by the way, is that his daughter has disappeared long since. Bells should ring in any reader's head at the encounter with the beggar girl.) By the end, the King is dead, the minister exiled, and the beggar girl is installed in her rightful spot as Queen, and the hero, Theo, is her fiance. I felt Westmark was interesting, but that the resolution was a bit too easy and convenient. 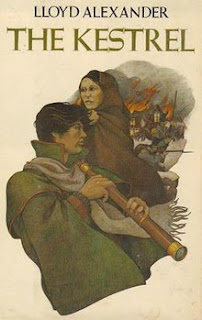 A fairly short time after the events of Westmark, the action of the sequel, The Kestrel, commences. The Barons are mad at the new Queens' reforms, the fiery revolutionaries are convinced she isn't going far enough, and Theo is restless. He heads into the back provinces, and finds himself nearly killed, as an invasion, fostered by a traitorous Baron, a traitorous General, and the evil minister from Book 1, has begun. The neighbouring country, Regia, with the promise of an easy victory over the General's forces, has crossed the border. But the Queen, who has implausibly snuck out of the palace to try to find Theo, ends up rallying her army after the General's surrender to Regia. Meantime Theo ends up with Florian, the previous book's revolutionary, and he decides to join a newly formed guerilla army, intended at first to harry the Regian army, but eventually to force the Queen to further concessions.

This book pushes its characters a bit harder than Westmark: carefully selected minor characters (whose red shirts are easily detectable) are killed, and the major characters, especially Theo, are made to see the evils of war, and their own potential for violence, fairly effectively. But still, the resolution is too easy, too convenient, too brisk. And certain implausibilities (mainly the Queen blithely sneaking around in costume, just about anywhere) did rather annoy me.  It's not a bad book, but it is flawed.