Another birthday today is that of the wonderful and versatile Kij Johnson. Here's a collection of my Locus reviews (plus one from my blog) of  her work:

And finally to two very strong original anthologies. Ellen Datlow and Terri Windling offer another themed book on folk themes: The Coyote Road. The subject is trickster tales, and fortunately the theme has been interpreted very freely.... In Kij Johnson’s “The Evolution of Trickster Stories Among the Dogs of North Park After the Change”, the title “Change” is animals learning to talk,  which proves difficult for pet owners for multiple reasons. Many dogs are abandoned, and many are killed. The story revolves around a series of cunningly changing tales the newly speaking dogs in one small city park tell a sympathetic woman. The thought-provoking real subject, of course, is our present relationship with non-speaking animals.

From the July Asimov’s, Kij Johnson’s “26 Monkeys, Also the Abyss” is a sheer delight. Aimee is the operator of an act featuring 26 monkeys, who perform various stunts, then disappear. The story, of course, isn’t about the monkeys disappearing – it’s about Aimee, and how she got there, and her boyfriend, and their future, if they have one.

Clarkesworld also continues to provide really strong work, much of it Science Fiction of an unusual cast. For instance, from October, Kij Johnson’s “Spar”, a story of a human and an alien marooned together on a space lifeboat. It’s aggressively unpleasant – their only communication seems to be sex – if it counts as sex – but unforgettable.

“Story Kit”, by Kij Johnson, begins with Damon Knight’s six story types, and continues by listing a number of stories of abandoned women … It’s about a woman, a writer, who, we gather without quite being told in so many words, has been dumped. Much of the story is meditation on the story of Dido (Queen of Carthage, loved and then abandoned by Aeneas). It’s interesting, and well-written ...

The other novella from the October-November Asimov's is outstanding: “The Man Who Bridged the Mist”, by Kij Johnson. Kit is an engineer, taking over a project to build a bridge across a river of a strange substance called “mist”. The story is quiet, fairly simple, but involving throughout, as we see Kit's job from numerous angles: there are engineering problems, management problems, tragedies, potential issues with the locals (including the “Ferry” people, whose business would vanish with the success of the bridge). There's Kit's history, and his rootless life. There's the somewhat (but not terribly) exotic setting. I don't think the story has any “wow” moments – it's just a solid accumulation of absorbing detail.

Kij Johnson's “Mantis Wives” (Clarkesworld, August) is a short sharp look at male/female relations described as if women, like mantises, devour their mates. 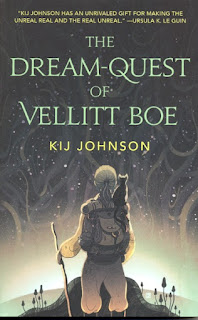 Also from Tor.com, in this case their line of novellas, is a beautiful story by Kij Johnson, The Dream Quest of Vellitt Boe. This is evidently in dialogue with H. P. Lovecraft’s “The Dream Quest of Unknown Kadash” (which I confess I have not read), though I was more reminded of Lord Dunsany: and after all Lovecraft’s story (unpublished in his lifetime) was written quite overtly under the influence of Dunsany. Johnson, as well, writes of a Lovecraftian world with, well, actual recognizable women! Vellitt Boe is a professor at a women’s college in the Dreamlands. One of her students has run away with a dreamer – a man from our world. This is a problem, because her father is influential … and, as it happens, her grandfather even more so, in scary way. So Vellitt, who has experience wandering, must set off after her, through very dangerous places, and even an encounter with her old lover, Randolph Carter, in search of a way to the waking world, to persuade her student to return. This story is just beautifully written – way more Dunsany than Lovecraft! – and exciting, and well imagined, using the good stuff from Lovecraft and new good stuff, and honest about consequences. Unquestionably one of the stories of the year.