The City in the Lake, by Rachel Neumeier

Books Considered: The City in the Lake, by Rachel Neumeier

I run into Rachel Neumeier fairly often at local conventions (she lives in outstate Missouri.) She's written a number of fantasy novels, for Orbit and Saga and other houses, YA and adult both. She gave me a copy of her first novel, The City in the Lake, after the first panel we shared, at Archon quite some time ago. Here's what I wrote about that back then. 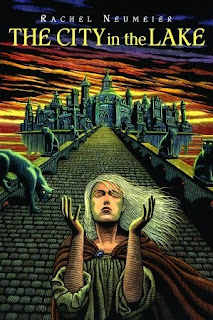 It's a YA novel, a fantasy, in general outline a fairly conventional YA fantasy, but quite well done, and achieving real beauty at times. Some of it reminded me a bit of Le Guin, particularly the first Earthsea books, not in plot in any way, but rather something of the feel of the book. I liked it quite a bit, and I hope to see more from Neumeier.

It is set in a mostly peaceful kingdom. The King has two sons. The elder, called the Bastard, is the son of a mysterious woman who came to the City, more or less seduced the King, and then left after bearing his child. The younger is the son of the Queen, a much younger woman who married the King years later. The younger son is of course the heir, and he is widely beloved. The Bastard is instead widely feared, but it seems not for good reasons -- he is in fact an honest man, and very capable, and has no wish to supplant his half-brother as heir -- but people just assume he does. Then the younger son disappears, and no one can find him, and things in the Kingdom start to go wrong.

In a pleasant village remote from the central City, a girl named Timou grows up. Her father, Kapoen, is a wizard, a rather powerful wizard for such a small village, but he is accepted, and does well by the village. Timou never knew her mother, however. She grows up happily enough, learning from her father how to be a wizard, and making friends with the village children, but somehow remaining rather separate. When a young man, Jonas, begins to court her, she puts him off, though she likes him, because she has learned from Kapoen that wizarding and marriage do not mix. Then one spring, as Timou turns 17, disaster strikes: the animals fail to bear, trees won't bear fruit, and Timou's just married friends have stillborn children. The villagers learn that the Crown Prince has disappeared, and of course it is assumed that his disappearance is the reason for the disasters ... Kapoen decides he must travel to the City to help the court wizards find out what has happened, but he charges Timou to stay put.

Of course, after a while she decides she must go to the City as well ... to look for the Prince, or for her father, or for her mother perhaps? She must first travel through the strange forest between her and the City, and that is a strange journey indeed. Then she comes to the City, and also its parallel City, in the Lake, and finds something quite unexpected there. Meanwhile the King has also disappeared, and the Queen blames the Bastard ... And Jonas follows Timou, against her express instructions, and he finds that the path through the forest is different for all different people. Of course, all these people are key to the eventual solution, which is nicely handled, and resolved well, not without loss, but not sadly.

The magic in this book often seems arbitrary, but in quite effective ways. It comes across as magic, not just a different sort of science. The worldbuilding is undeniably rather thin -- at times the world seems to consist only of city/village/forest ... but this isn't a novel that rests on worldbuilding. It rests rather on the characters, and on a little familial tangle, and on magic -- and one some quite nice set pieces, some quite dramatic scenes. Very nice work.