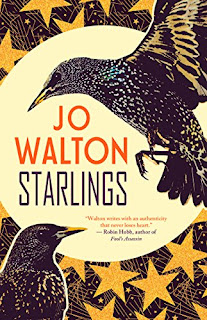 Today is my friend Jo Walton's birthday. In her honor, then, here's a briefish collection of my reviews of some of her short fiction. I wish there could be more, but she is primarily a novelist, and an excellent one. But her short fiction is excellent too -- and there is a collection, Starlings.

Best I think is Jo Walton’s “Down to Earth” (Absolute Magnitude), in which a somewhat naïve young woman from a space habitat travels to Earth to capture squirrels. Only she doesn’t know much about squirrels – or about Earth.

Review of The Best from Jim Baen's Universe from Locus, October 2007

There are other strong stories – Jo Walton’s “What Would Sam Spade Do?” is an amusing and sharp variation on the idea of cloning Jesus.

Jo Walton’s “Escape to Other Worlds With Science Fiction” (Tor.com) is a brief pendant to her Farthing novels, set in the U. S. and quietly showing that it shared England’s darkness.

But the clear standout in Firebirds Soaring is Jo Walton’s “Three Twilight Tales”, which begins with a girl making a man out of “two rhymes and a handful of moonshine” and continues into a tavern, where three separate but closely linked tales unfold, leading with retrospective inevitability to a king in search of a queen who finds something perhaps better.

Jo Walton's “Turnover” (Lightspeed, March) is a strong generation ship story from a rather obscure recent source, a 2013 chapbook published by the UK convention Novacon.

Jo Walton also contributes a strong story to Tor.com in August, “Sleeper”, in which Essie, a biographer in an all too plausible dystopian corporatist future, creates a simulation of her latest subject, Matthew Corley, a fairly famous televison director who had a couple of secrets – he was gay, and he was a Soviet “sleeper” agent. The simulation is ostensibly to help Essie understand her subject better, but the story subtly and almost sadly suggests another reason for her creation, in a dark 21st Century, of a computer simulation of someone who wanted a better world in the 20th Century.

Tor.com in April features a Jo Walton story with a really absorbing central idea. In “A Burden Shared”, technology exists that allows one person to take on another’s pain. The main character, Penny, and her ex-husband take turns sharing their daughter’s pain – she has an incurable condition resulting in constant pain; and without this help her successfully career might be impossible. (Other uses of the tech are mentioned – apparently devoted fans of celebrities clamor to take their idols’ pain for a time – a nice touch, I thought.) But when Penny wakes up Ann’s pain seems worse than usual – and that points up a real issue with the notion: pain does have uses – and, also, if you are sharing someone else’s pain, what about your own? And indeed Penny soon learns that she has cancer – is it possible she missed the signs because she confused that pain for Ann’s pain? The interesting central idea aside, the story is also an effective look at Penny’s emotional landscape.