Sometimes -- often! -- the life stories of the writers of these Old Bestsellers are more interesting, more lurid, than the stories in their novels. I've covered a couple of writers who were murdered in the past. Here's a writer who committed suicide at the age of 36, despite what seems to have been a fair amount of commercial success. To be sure, commercial success does not necessarily translate to personal happiness. 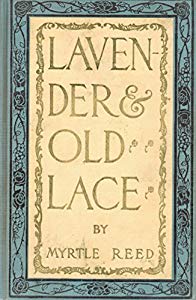 Myrtle Reed was born in 1874 in Chicago. Her father was a preacher and the editor of a literary magazine (the Lakeside Monthly), and her mother was a writer on theological subjects. Myrtle published juvenilia as early as the age of 10, and continued to write, though she showed signs of depression from early on, and did not attend college after a breakdown. Her first novel, Love Letters of a Musician (1899), went through at least 15 printings, and the book at hand, Lavender and Old Lace (1902) was also wildly successful. (My copy is a Grosset and Dunlap reprint from 1907.)

Reed married James McCullough, who worked in real estate, in 1906, after a courtship of some 15 years. Alas, the marriage does not seem to have been a success, and McCullough turned to drink, and spent considerable time away from home. Reed, long a user of Veronal, committed suicide in 1911. This quote, from her posthumous novel Threads of Gray and Gold, seems possibly only too personal: "The only way to test a man is to marry him. If you live, it's a mushroom. If you die, it's a toadstool."

(Incidentally, as Greg Feeley divined, this title was what Joseph Kesselring was riffing on when he gave his play Arsenic and Old Lace its title.)

So, what of this novel itself? I have to say, I found it kind of a mess. A promising mess, in that the established situation could have resulted in a pretty neat story. But the novel fumbles things badly. 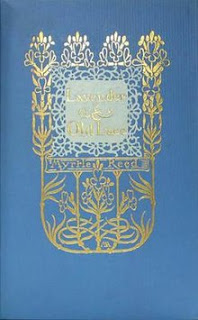 It opens with 25 year old Ruth Thorne coming to her aunt's house by the sea for a few months of rest. She's had some sort of health breakdown, and needs to take a few months off her job as a women's issues reporter for a newspaper. (Her job is presumably in New York, and her Aunt's house must be in, perhaps, Connecticut? Never made clear.) Oddly, though, Ruth's aunt, Miss Jane Hathaway (whom she has never met) has gone overseas on a suddenly planned trip. Ruth meets the maid of all work, Hepsley, and settles in to a very languid life, her only duty a strange one: to light a lamp and leave it in the window of the attic every night.

Soon Ruth has explored the attic and found some curious hints of an interesting past for her aunt. A seafaring man seems to have been important. And a man named Charles Winfield is mentioned. Along with a notice of Mr. Winfield's marriage to another woman, and that woman's death. But Rose is a gentlewoman, and refuses to snoop further.

Soon she encounters an old, but perhaps estranged, friend of Miss Hathaway, a Miss Ainslie. Miss Ainslie obviously has her own secrets, and she is considered very odd by the rest of the village. But Ruth and Miss Ainslie quickly become very close friends. More complications arise from M iss Hathaway's maid Hepsley's extended courtship by a local yokel; and then by the appearance of a young man who also works on a newspaper, and who also is on a rest cure -- in his case, his eyes have failed him. This man has the intriguing name of Carl Winfield. Before long Ruth is reading the daily newspaper to Carl, and as the reader expects, they begin to become close ...

The resolution is prompted by the sudden return of Miss Hathaway, who is no longer Miss Hathaway, but instead Mrs. Ball. Mr. Ball is named James, and he seems not too happy about his perhaps forced marriage. It seems he is the mysterious man in Miss Hathaway's past, who maybe ran away to sea to escape her clutches. Then what of the mysterious Charles Winfield? And the light in the window? And Miss Ainslie's past, not to mention her unusual interest in young Carl Winfield?

I'm sure you can all guess the answers to these questions. Alas, they are revealed in a terribly anticlimactic fashion. So the novel really disappoints. But there are lots of interesting elements. Hepsley and her beau, for example, are sometimes amusing comic foils. So too is James Ball, and his relationship with his new wife, the former Miss Hathaway, is also played, fairly effectively, for laughs. And the whole story of the light in the window, and Miss Ainslie's secret, is reasonable scaffolding for a cool mystery. But for all that, Reed just doesn't make the whole mix work.
Posted by Rich Horton at 7:46 PM