Birthday Review: The Sinful Ones/You're All Alone, by Fritz Leiber

Fritz Leiber was born on Christmas Eve in 1910. He died in 1992. He was named an SFWA Grand Master in 1982, and received Lifetime Achievement World Fantasy and Balrog awards as well. He also won six Hugos, two for Best Novel, two for Best Novella, and one for Best Short Story, plus a curious special award for "the use of SF in advertising". He's one of my favorite writers, so I I'm doing this belated birthday review of one of my favorites among his novels, The Sinful Ones, and its earlier version, "You're All Alone." The reviews are very brief capsules, I will add.

The Sinful Ones had an odd publication history. It began as a novella called "You're All Alone", slated for John Campbell's fantasy companion to Astounding, Unknown. When the World War II paper shortage killed Unknown, Fritz Leiber had to abandon it. (At this time he had to take a defense job, too.) After the war he rewrote his original idea from scratch, first as a 40,000 word novel called "You're All Alone", which was published in Fantastic Adventures for July 1950. He expanded it by about 50% and this version ended up at a rather sleazy house, Universal, who added some "spicy" sex scenes, in a way that embarrassed Leiber. (They also hung the not awful but not as good as "You're All Alone" title of The Sinful Ones on it.) That edition was published in 1953 as an omnibus with another novel, about bullfighting, Blood, Bulls and Passion. (Not by Leiber.) 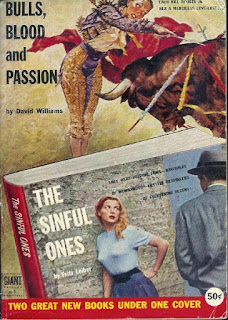 Finally, in 1980, Leiber had a chance to reprint the novel at Pocket Books, but he no longer had his original manuscript. So he worked from the published version, but rewrote the sex scenes. Which ended up being a good idea, I think. They're pretty good scenes (I think Leiber is a good writer of sex scenes), and there's no way the Leiber of 1953 would have written those scenes.


The Sinful Ones is a very good urban fantasy, from before there were urban fantasies. It's about a man in Chicgao, stuck in a rut, with his ambitious girlfriend pushing him to get a better job. One day he meets a strange, scared, young woman, Jane Gregg. Something about this encounter kicks him out of his rut, and he realizes in essence that he and only a few other people, including Jane, are truly "alive". As long as he is out of his "routine", nobody else perceives him. The novel is spooky, and sexy, and thought-provoking, and scary. It's a real good read, too, and the portrayal of Chicago is fun as well.  The eventual resolution is only OK, not great, but it hints at better things.

I read "You're All Alone" for comparison's sake. It's quite significantly different from The Sinful Ones. For the most part, the longer novel is superior, in my opinion, though some of that may be because I read it first. The basic story is the same, though: Carr Mackay discovers that almost everybody is an unconscious part of a machine: only a few people are capable of independent action. Most people use this power to play awful games with the unconscious people, but Carr is discovered by a young woman, Jane Gregg, who will not act like this, and tries to hide from the rival groups of evil awakened people. After resisting the true nature of the world for a while, Carr finally gives in, falls in love with Jane, and at the end finds himself in a desperate battle with the villains.

It's an intriguing premise (reminiscent, to me, of the movie Dark City, which I happened to see at about the same time as I first read The Sinful Ones). The conclusion in both cases is OK, but a bit abrupt, and in neither case is any larger issue resolved, beyond Carr and Jane's immediate danger. (Which may actually be the more honest approach.) But the longer novel does work things out much better, and has some decent sex scenes (added in 1980, actually, so it might not be fair to criticize "You're All Alone" for its lack of same), and in general Jane and Carr are both more fleshed out. (The edition I have of You're All Alone is an Ace paperback including the 40000 word short novel and two novelets: "Four Ghosts in Hamlet" and "The Creature from Cleveland Depths", both very well worth reading as well.)
Posted by Rich Horton at 7:19 PM