This would have been John Sladek's 82nd birthday. Alas, he died in 2000, only 62. Last year I reviewed his novel Bugs in this space, and I have also reviewed his novel Tik-Tok. I'll post links to those reviews below, but in addition, here are some very short capsule reviews of two more of his novels. 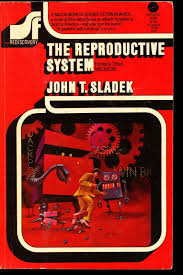 When John Sladek died, I realized I had never read any of his novels, so I dug out a copy of The Reproductive System that I'd had for a while, and figured I'd read it.  (This novel was called Mechasm when Ace published it in the US: the British title is much much better, and makes much more sense.) This is a satirical novel about a company in Nevada (or maybe Utah) which hires a mad scientist who designs self-reproducing, intelligent machines.\ Soon the machines escape and threaten to take over the world.  The plot isn't the main interest, of course.  Indeed, the book isn't that well structured: there is an almost wholly unconnected subplot about Americans and Russians spying on French efforts to launch a rocket to the moon.  But though some of the humor is dated, most of it is still pretty incisive.  Parts of the book are laugh out loud funny, while also being observant and effectively satirical.  Definitely a worthwhile read. 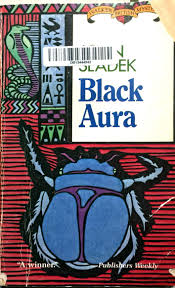 John Sladek wrote a couple of mysteries in the 1970s, featuring as a detective an American living in London, Thackeray Phin.  (Sladek himself was at that time an American living in London, though I believe he moved back to Minnesota for the last several years of his life.)  I bought Black Aura, I believe the second of the series.  (I am not sure there were any more than two: the first book, I think, was Invisible Green.)  Thackeray decides to investigate a medium who is running a society called the Aetheric society (or something). He simply wishes to figure out her methods (which are conventional medium fraudulence), but while he is living with the society a couple of murders occur, which he ends up solving.  It's an OK read, and sometimes reasonably funny, but not nearly as funny as for example his SF novel Mechasm.  Plus, the plot is a bit implausible, and the solution to the murders is pretty clever, but as usual overcomplicated.  Good enough that I figure I'll try the other one, but nothing near as good as his remarkable SF satires.