The Chaos Function, by Jack Skillingstead

I've enjoyed Jack Skillingstead's short fiction for a long time, but for whatever reason (mostly that I can't keep up with the SF field's novels that well) I hadn't yet read one of his novels. So when I saw a copy of his latest, The Chaos Function, at Sally Kobee's table in the Archon dealers' room, I figured it was time to remedy that situation. 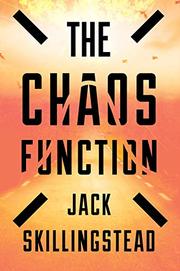 The protagonist of the novel is Olivia Nikitas, a reporter addicted to what she calls "the Disaster" -- the ongoing crisis always present somewhere in our world. The book is set in the very near future (2029), and as it opens, Olivia is in Aleppo, shortly after the Syrian civil war has come to a shaky conclusion. She's ready to investigate a rumor of a torture cell in the Old City, and she ends up there with her Syrian guide and her current boyfriend, Brian, who is getting a little too important to her for her own comfort. And things go pear-shaped -- the guide and Brian are killed, and in the basement of an old madrassa, Olivia sees an old man die -- and something very strange happens. Something transfers from the old man to Olivia, and she has a vision of a slightly altered future, in which Brian survives. And that turns out to be the case -- only Olivia remembers anything different.

But otherwise the world is suddenly going even more to hell than usual. An apparently weaponized virus has been released, and a pandemic is sweeping the world (except, suspiciously, Russia.) Olivia and Brian return to her Seattle home. But Olivia, ever suspicious, realizes she's being followed ... and before long she's been kidnapped, and ends up in rural Idaho, a captive in a place called Sanctuary. Here she learns that she is now in possession of the ability to change the past -- an ability passed through a series of "Shepherds" since roughly the time of Christ. These Shepherds, now sheltered by a creepy cult-like organization, have tried to steer history onto relatively optimal paths ever since, though they are riven even now by a faction that insists on very conservative changes, and another faction that wants to do more radical things (including using the timeline changes for personal enrichment.) Now Olivia is the new "Shepherd", unless she is killed ... and anyway as a woman she's ineligible. Moreover, this latest crisis, the released bioweapon, may have resulted from her accidental alteration of events to save Brian's life.

Olivia manages to escape, with the help of a couple of discontented Sanctuary members. She's none too sure about the Shepherd rules, either -- there are hints that in the "past" they've not exactly chosen the most beneficial paths. (And "beneficial" is of course a fraught term.) What follows is a desperate chase across half the country and back, and then a return to Syria, as more and more people succumb to the bioweapon. Olivia of course is tempted to change the recent past again and again -- and the results seem more disastrous all the time ...

The endgame is in its broad outlines discernible from the start. The central philosophical questions -- what are the ethics of changing history? who does it benefit? how can it be controlled? -- are interesting, but all lead to a simple answer. In a way, this is disappointing to an SF reader: we have a tendency to want control, to want a path to utopia, to make things right. And Skillingstead wisely dodges this sort of resolution. The other key arc is the characters. Olivia remains interesting throughout -- she's a sharply portrayed protagonist. The other main characters, even Brian, don't quite come into the same focus (though a variety of minor characters convince in their short stays.) Olivia's personal journey is pretty affecting, however, if perhaps her final steps seem a tad pat.

This is a strong novel with its eye usefully aimed right at the current Disaster, outside the US. (The Disaster within our borders is oddly absent -- perhaps things have lurched positively between 2020 and 2029!) It's exciting, even gripping, throughout. I'm glad I finally got to one of Jack's novels.

(Mild disclaimer -- Jack and I once worked at the same company, though half the country apart, and we certainly didn't know each other. (We've met since, a few times.) I don't think that really means all that much, but it's always increased my interest in his fiction.)
Posted by Rich Horton at 7:12 PM