Today's birthday review is of one of the most significant figures in SF history, SFWA Grand Master Michael Moorcock. Moorcock, who turns 80 today, was a hugely important editor, the man who helmed New Worlds through the mid to late 1960s, the very apex of the New Wave. He was also (is also!) a major writer, with contributions to heroic fantasy, to science fiction, and to literary fiction.

My reactions to Moorcock have been wildly varied. I loved Behold the Man when I read it as a novella at age 14 or so in a Nebula volume. I adored the Dancers at the End of Time series. But I never got on at all with his Jerry Cornelius stories. I read a few Elric novels and my reaction was more or less "Meh". And I've run across a few stories over time that I just hated. I compare him to James Blish as one of the few writers who could be just terrible on occasion, and absolutely brilliant the next time out.

Below I offer a set of review of some of his stories, mostly less well-known. Some are from Locus reviews, and some are from much earlier. Some of the stories are weak, some are very good. And it all opens with, of all things, a look at a letter he wrote very early in his career!

The letter column was quite irregular in Fantastic, but it's present in the July issue, for something of a special occasion, perhaps. Michael Moorcock, then a very young writer (his first story, in collaboration with Barrington Bayley, appeared in New Worlds in 1959, and his first solo work in 1961 in Science Fantasy), had read comments about Mervyn Peake and his Gormenghast books in Fantastic earlier that year, and he wrote to mention that Peake (whom he knew well) was seriously ill and unlikely to write another Titus Groan Book. He commends the anthology Sometime, Never to the Fantastic readership (which included good stories by Peake, William Golding, and John Wyndham). He disputes reader Pat Scott's contention that the Gormenghast books were "Gothic" (a common characterization), and instead suggests Peake's writing, despite the grotesqueries and "purple prose", is more objective -- more like Shakespeare than Dylan Thomas. He compares Steerpike to Richard III. He laments the likelihood (which proved true) that Peake would write no more. He praises Fritz Leiber highly (much better, he suggests, than Dunsany). And he finds time to praise Fantastic in particular.

The lead "Short Novel" is Michael Moorcock's "The Sundered Worlds", at 24,000 words. The blurb for "The Sundered Worlds" reads "Michael Moorcock, a rising young London author, has been making quite a name for himself in our bi-monthly companion Science Fantasy. With a developing flair for other-world descriptiveness, we prevailed upon him to try a long science fiction story -- with the following surprising result." (I assume Carnell meant to ascribe the "developing flair for other-world descriptiveness" to Moorcock, though a strict reading of that sentence would suggest it concerns the means Carnell himself used to convince Moorcock to try SF.) I haven't read any of Moorcock's earlier stories, those that made him a "rising young ... author". Certainly his later career bears out Carnell's belief in him. But "The Sundered Worlds" does not!

"The Sundered Worlds" is, to put it mildly, a mess. It begins like a low-grade imitation of A. Bertram Chandler, and sort of makes up stuff as it goes along to get worse, trending towards a transcendent ending that would have been OK if it had been set up better. I was reminded, besides Chandler, of the sort of wild pulp flights of imagination that I associate with a much earlier time -- John Boston suggests Planet Stories, but I was thinking of something earlier and less pure adventure oriented. All this could certainly be made to work, after a fashion, but it doesn't work here. The writing is downright poor (at the sentence level), the imagination is slapdash, the characterization is arbitrary (and sexist), and of course the scientific rationale is nonexistent.

The hero is Renark, a powerful Guide Senser, who meets with his friends Talfryn and Asquiol, the latter a disgraced nobleman, on the isolated Rim planet Migaa. From this planet the three plan to transition to the "Shifter", a curious planetary system that apparently traverse several universes in an extra-dimensional path. Renark apparently believes he must learn the secret of the Shifter System, for, it transpires, the Human universe has begun to contract, and humanity must find another universe to inhabit. The three men, along with a beautiful young woman Asquiol has taken up with, Willow, make their way to the Shifter. After fighting off an attack from hostile aliens, they find the world colonized by humans who have made it to the Shifter. There Renark must find a mad woman called Mary the Maze, who has visited the strange planet called Roth, or Ragged Ruth -- a planet that exists simultaneously in many dimensions. There Renark will meet aliens who will lead him to the ultimate secrets of the nature of the multiverse, and the possible destiny of humans, if they can evolve themselves sufficiently. Or something like that.

In description it doesn't sound hopeless. But in execution it is. I really suspect Moorcock didn't know where he was going as he wrote the story. I also think he was still learning to write -- the prose seems to improve as the story continues (or else I became acclimated to the style). What was going on? Andy Robertson suggests that Moorcock was cynically working out his hatred of SF, by writing a story so bad that it would demonstrate the emptiness of the genre. I have to doubt that was really his intention. At any rate, he demonstrated rather that it was possible to write a really bad SF story -- but I think we knew that already. John Boston suggests more of an attempt to recreate an old style of superscience story, with a dimension-transcending fate for humanity, etc. etc. This seems closer to the mark -- the problem being that by 1962 such a story needed a greater degree of writing skill and imagination than may have been necessary in, say, 1936.

It occurs to me that I have perhaps been harder on this story than I would be if the same thing was written by someone I had never heard of. This may well be -- I expect more from a celebrated writer like Moorcock, and thus I may be more critical when my expectations aren't met. And the Moorcock of 1962 may simply not have had the skills that he eventually developed.

There is a sequel, "The Blood Red Game", that appeared in the last issue of Science Fiction Adventures, #32. I'll be reviewing that in a day or two. The two stories combined were published as a novel, under each title at different times: The Sundered World and The Blood Red Game.

Retro-Review of Science Fiction Adventures, May 1963

"The Blood Red Game" is a direct sequel to "The Sundered Worlds". The protagonist of "The Sundered Worlds", Lenark, went down with the ship -- or universe -- at the end of that story, so this time around the nominal hero is Asquiol. He leads an expedition of humans to another universe, where they encounter inexplicably hostile aliens. It turns out the aliens believe in resolving conflict via games, and they agree to play the "Blood Red Game" of the title with humans in lieu of direct war. But the humans, not surprisingly, are losing anyway -- the game, a sort of telepathic battle of intimidation, was invented by the aliens after all.

Luckily a rebellious man named Roffrey fled the earlier space battle out of a combination of cowardice and orneriness. He makes his way to the Sundered World of the previous story, and there meets Asquiol's one time lover Willow, and Asquiol and Lenark's former associate Talfryn. Roffrey also tracks down Mary the Maze, the madwoman from the previous story. She turns out (that is to say, Moorcock's conveniently makes it up on the spot) to be Roffrey's estranged wife. The four head back to the other universe and -- surprise -- they turn out to be fabulously good players of the Blood Red Game. Naturals, you might say. Well -- 20 some thousand words later, the aliens are vanquished, Mary is sane, Asquiol is a god more or less, and "The multiverse ... delighted them ..." 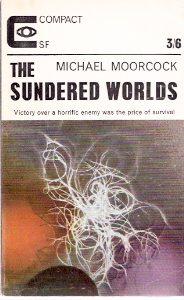 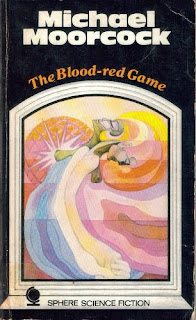 I was less impressed with Michael Moorcock's "The Camus Referendum", a Jerry Cornelius story, to do with future corporatism and war, which frankly reduced me to pretty much reading sentences without assigning them meaning. This happened to me with a similar Jerry Cornelius story in Interzone a couple years back. I can only conclude that I am out of sympathy with Moorcock's aims here. There is also a Moorcock novel excerpt, "The Vengeance of Rome, Chapter 3", which is nicely written but which reads like a novel excerpt and not like a complete story.

One very intriguing debut publication is Argosy, a magazine launched at least somewhat in the tradition of the early 20th Century magazine of that name, in that it will feature a "catholic" array of stories -- stories from all genres. One bit of welcome news is that each issue will feature a separately bound novella. The novella for January-February 2004 is Michael Moorcock's "The Mystery of the Texas Twister". Metatemporal investigators Seaton Begg and Taffy Sinclair investigate a dastardly plot to start an unjust war, involving Texas politicians. I was a bit disappointed, as the action was downright silly without really being very funny.

Interzone’s July-August issue is a Michael Moorcock special. It includes an interesting extract from a memoir of Mervyn Peake that Moorcock is working on, a Guest Editorial, an interview, a novel extract, and one new story, “The Affair of the Bassin les Hivers”, a very entertaining story of a murdered prostitute and time travel, featuring as usual for Moorcock members of his multiversal repeating cast, such as Una Persson.

Michael Moorcock’s “Modem Times” is a wild mélange of incidents across his multiverse – these stories have never been to my taste (perhaps I need to have read more of Moorcock’s Jerry Cornelius stories to get them) – but I suspect this will appeal to devotees of the Cornelius branch of Moorcock’s storytelling. (For me, I’ll take more Seaton Begg and more Jherek Carnelian.)

Another more traditional kind of weirdness is displayed in the long Elric story Michael Moorcock offers, “Black Petals” (Weird Tales, March-April). Elric is seeking a flower which blooms but once a century, and which he hopes will offer him a way to avoid using Stormbringer, the sword that when drawn must kill, and that he must use to sustain his life. He joins a party formed by a couple of sisters who wish to rescue their father, who was lost in the ruined city of Soom, where the flower blooms. It is reasonably conventional Sword and Sorcery – that is, conventional in the way the genre was redefined by the likes of Moorcock – and while it’s familiar stuff, it’s quite effective.

There are plenty further excellent stories in Stories, for example Michael Moorcock’s novelette also called “Stories”, a roman à clef retelling the history of New Worlds as if it had been a mystery magazine instead of SF, and featuring thinly disguised versions of the likes of Tom Disch and J. G. Ballard.
Posted by Rich Horton at 6:37 PM