Birthday Review: In the Courts of the Crimson Kings, by S. M. Stirling (plus two shorts)

S. M. Stirling turned 66 today, so I decided to exhume this review I wrote a while ago about his novel In the Courts of the Crimson Kings, along with a couple of brief looks at short stories from my Locus column.

In the Courts of the Crimson Kings, by S. M. Stirling 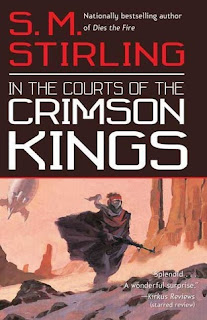 I was surprised to realize that I've actually not previously read a Stirling novel. I confess the premise of the Draka series turned me off -- I don't dispute that the stories might be enjoyable and well done, but I didn't want to read them. In a different way, the Island in the Sea of Time books aren't either my cup of tea. I did read some stories set in his Dies the Fire universe, and had I more time I might have gotten to the novels, but I didn't. However, his new series appeals quite openly to my inner Golden Age of SF fan. I had been considering getting the first, The Sky People, but hadn't got around to it. So instead I began with book 2 of the series (I'm not sure there will be any more -- there doesn't need to be, but there could be). This novel opens with a rather unbearably twee prologue set at an SF convention in 1962. The viewpoint character is named Fred (wink wink nudge nudge), and he records the reaction of the SF professionals to the American landing on Mars. Injokes abound, most labored (a writer named Bob (wwnn) lamenting that he had to abandon his planned novel about an orphaned adopted by Martians), only one cute (and that maybe unintentional: a brand new writer named Larry bursting out "Lookatthat!"). Lots of namechecking: Jack, Arthur, Spreggie (!), Poul, Beam, Leigh, etc. I get it, I suppose -- we are being signaled that this is a novel about the sort of Mars we used to dream of in SF, but I thought it went on way too long for too little effect.

But the real novel is much better. This is an alternate history, in which for reasons that will become clear, Venus and Mars have conditions similar to many pulp era SF stories. Venus is a wet jungle planet with fairly primitive humanoid inhabitants. And Mars is a dying desert planet with very civilized humanoids with a very old, very tradition-oriented culture. The Sky People concerned the exploration of Venus. Now, In the Courts of the Crimson King deals with Mars.

The main characters are a Martian Princess, natch, and a human scientist. But that's not quite right. The Martian, Teyud za-Zhalt, is the daughter of the current very old King (or Despot) of the City That is a Mountain, the much shrunken remnants of a Kingdom that once ruled all Mars. But Teyud's mother was not of the appropriate genetics to have an official child (or something), and since Martian women can control their fertility, her decision to have a child was a capitol crime. She was horribly killed, though the King managed to spirit his daughter away, where she was raised ("socialized") in her mother's genetic caste, Thoughtful Grace -- very intelligent and powerful warriors. Because of the control over fertility, Martian females and males have essentially equal status, so Teyud in fact is a potential heir to her father's throne -- which makes her a target if found of rivals of higher social class but less direct genetic relationship to the dying older King. So for decades (Martians are very long lived) she has been acting as a mercenary for hire, guarding caravans and the like, I suppose. And now she has been hired to escort a Terran expedition to a mysterious long-abandoned city. And the archaeologist who most wants to investigate this city is Jeremy Wainman. Jeremy is well-qualified, not just because of his scientific ability, but because he is fairly well adapted to Martian conditions: he grew up in the dry New Mexican highlands, and he is very tall, at 6' 6" only half a foot or so shorter than Teyud.

So, the expedition sets off for the lost city. Jeremy and Teyud, predictably, perhaps, begin to take a liking to each other. But they are soon aware that they are being chased ... as we learn, by representatives of not only the putative "Crown Prince" who has discovered her existence, but also by representatives of conservative factions in the King's government, who are concerned over his innovations (he is working with Terrans to use nuclear power to help circulate water more efficiently, thus perhaps to some extent alleviating the long decline of Martian civilization). They each manage to save the other's life, further cementing their affections for each other. And at the lost city they make a spectacular discovery, one with implications for Teyud's fitness to rule a perhaps revived Mars.

All this is really more or less the shape of the narrative we expected. And so it continues, with lots of action, chases, a "damsel in distress" (except, as noted, it's not a damsel but a guy -- Jeremy -- part of a purposeful inversion of pulp traditions that Stirling pulls off nicely) -- all leading to a dramatic final confrontation. And it's really lots of fun. I will say that I thought the actual final conclusion a bit too much of a deus ex machina, and not quite what I had in mind. Which of course isn't necessarily an author's obligation -- he's writing his book, not mine -- but still! Anyway, for all that as I said, I liked the book, as light entertainment.

S. M. Stirling's "Shikari in Galveston" (Worlds That Weren't) is set in an alternate world where an asteroid impact in the late 19th Century wiped out most of Europe and the United States' technological civilization: the new "British Empire" is dominated by India (and the descendants of Englishmen who fled to India under Disraeli's leadership), while the U. S. is inhabited by "tribes" of both white men and Indians, as well as debased descendants of those who turned to cannibalism in the aftermath of the asteroid impact.  I was disturbed by the way in which the cannibals were blithely portrayed as permanently subhuman, making them convenient villains, but the story, about a hunting expedition into cannibal country that runs into evidence that the cannibals are planning an organized attack on the "civilized" tribes, is brisk, exciting reading.

S. M. Stirling, in “Ancient Ways”, tells a very entertaining story of a Cossack joining up with a Kalmyk to rescue a kidnapped princess. It’s SF because it’s set in his “Dies the Fire” future, in which electricity suddenly stopped working, and society forcibly reverts to pre-industrial ways. It’s pure unpretentious fun, and I could see a series of stories following the same set of characters.
Posted by Rich Horton at 8:59 PM