Jo Beverly was born 22 September 1947, and died in 2016. In her memory then, on what would have been her 72nd birthday, here's something I wrote long ago about one of her Regency romances. 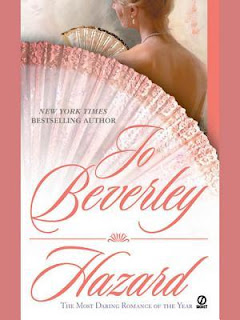 I read the occasional Regency romance, and one of the best contemporary Regency writers is Jo Beverly. (Jo has SF connections -- she was a Writers of the Future finalist back in the day, and she had a pretty decent SF romance story in the Catherine Asaro anthology Irresistible Forces in 2004.) Hazard is 2002 novel, peripherally connected to her ongoing Company of Rogues series of Regencies.

Lady Anne Peckwood is a demure daughter of a Duke. She is lame -- a twisted foot, and perhaps for that reason keeps to the background, but she is (as ever with Regency heroines) beautiful anyway. But she has been twice jilted, and begins to wonder if she will ever marry, even while she realizes she is not that upset over the jiltings -- perhaps, indeed, relieved. Her married younger sister is having her first child, and the blessed event occurs while their brother Uffham and his "secretary", a lower born man named Race de Vere, are visiting. Race shows himself very useful in the crisis when the baby comes a bit early, and Anne finds herself extremely attracted -- especially when they kiss, and when they play Hazard (a precursor to Craps) -- but of course de Vere is completely unsuitable for a Duke's daughter, despite his excellent war record.

Anne realizes her retiring habits are one reason she has not met a man she truly wishes to marry, so she vows to try one more season in London, this time taking a more dramatic role. Here long time friend St. Raven, one of the Company of Rogues, will be her escort -- but they are friends, not potential lovers. She creates a sensation, partly because of her beauty, partly because of Tris's escort, partly because of her embracing her handicap by such means as using a walking stick as a fashion statement. But the men she meets do little for her -- some are worthy but boring, some are not really worthy at all. Only her encounters with de Vere excite her -- but there is no getting over the fact that his father made his money in trade (and in a lottery!), nor indeed that for strategic reasons he may be declared a bastard before long. Eventually Anne settles on a war hero of sorts.

Well, we know where this is headed. Anne's elopement with the rackety war hero will not suit -- and somehow Race de Vere and she will overcome barriers between them. Of course none of this really convinces, but Beverly plays a bit fairer than some writers might with the situation. (De Vere, for example, does not suddenly become the Earl of Oxford and thus suitable.) There's a premarital sex scene, typical for Regencies nowadays, though not I think very believable. But readable enough. It's not great stuff -- not Heyer, even -- but it does rank above the run of contemporary Regency romances.
Posted by Rich Horton at 7:50 PM