Last year on this date I posted a few of my reviews of Andy Duncan's stories, but for some reason I missed several stories I'd covered. And I've reviewed a couple more since then, so why not repost my reviews this year, with the extra ones added.

(There's a new one too, in the September-October Asimov's, which I cover in the upcoming October Locus: "Charlie Tells Another One", about the great early banjo player Charlie Poole. Poole is featured (briefly) in the first episode of Ken Burns' Country Music series on PBS, and it was striking to see him called out right after I'd read Andy's story!)

The best new story, and perhaps the best story Weird Tales published this year, was by Andy Duncan: "From Alfano's Reliquary". This is about an early, corrupt, Pope, and his curious servant. Extremely well-written. Duncan is very very impressive.  I think this story might make my Hugo nomination ballot.

One of the most welcome names in the table of contents of Wizards is Andy Duncan -- I haven’t seen much from him lately, and I’ve missed him. "A Diorama of the Infernal Regions, or The Devil’s Ninth Question" has a claim to be the best story in this book. An orphan girl raised in a museum reaches a certain age, when her master wants her to start performing in the magic show -- which means submitting to the creepy attentions of a mostly male audience. She escapes to another world, where she meets, eventually, the Devil, and where she must answer his questions.

Andy Duncan’s “Slow as a Bullet” is pure tall tale, about a man who foolishly bets that he can outrun a bullet, and how he manages to do it. Duncan’s voice (or that of his narrator) carries the story, which is enjoyable but (as one expects for this sort of story) really quite slight.

Indeed The Dragon Book is enjoyable throughout -- not a story fails to please. The clear best piece is the closing story, which is also probably the least traditional "dragon" story: "The Dragaman’s Bride", by Andy Duncan. The story features Pearleen Sunday, from Duncan’s excellent earlier story "The Devil’s Ninth Question", but she is primarily there to record the relationship of an "Old Fire Dragaman" and a young woman threatened by sterilization as part of the infamous eugenics movement of the early 20th century, which focused on the poor of Appalachia. Duncan beautifully evokes the mountainous back country of his characters, and situates his "Dragaman" there with complete naturalness. The language is spot on, the story involving, the issue affecting.

PS Publishing’s Christmas special is The Night Cache, by Andy Duncan, which is only barely fantastical, but very enjoyable, about the love affair of two young women, and how one of them drags the other into her passion for geocaching. 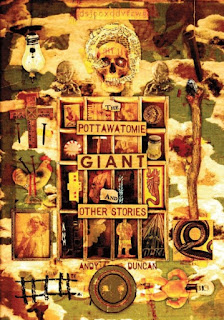 Finally, I must mention Andy Duncan's new collection, The Pottawatomie Giant. It's mostly reprints, and these are, as you might expect, excellent: stories like his wonderful secret history of the Soviet space program, “The Chief Designer”; and his delightful pair of stories about Pearleen Sunday and her encounters with the devil and a dragon of sorts (“A Diorama of the Infernal Regions; or, The Devil's Ninth Question” and “The Dragaman's Bride”). There is one new story, and it's a fine one: “Close Encounters”, in which a UFO contactee, years after his fame, is lured by a reporter into joining a latter day attempt to contact the aliens – with strange, sad, results, and accompanied by moving recollections of his previous “contact” and its results.

Analog’s latest issue features an Andy Duncan story, "New Frontiers of the Mind", that probably isn’t SF, but which is about a pretty significant figure in the history of SF and indeed of Analog: John W. Campbell, Jr. It’s well known that Campbell, while a student at Duke, participated in J. B. Rhine’s early investigations of ESP. This story imagines Campbell’s interactions with Rhine (in this case, an implausible early success), and also the marriages of both Campbell and Rhine (whose wife had a significant role in his researches). It’s a pretty affecting portrait of both couples, and of the obsessions of both men.

And in The Book of Magic Andy Duncan offers his third Pearleen Sunday story, “The Devil’s Whatever”, in which Pearleen, a wizard based in Appalachia, is finagled into helping her friend, the Devil’s son-in-law Petey Wheatstraw, out of a fix involving places named after the Devil.

Speaking of Andy Duncan, An Agent of Utopia is a very welcome new collection from him. It includes some of his best earlier stories, and it opens with two brand new pieces, both very good. “An Agent of Utopia” is set in London in 1535, with Thomas More waiting to be executed. But he has a surprising visitor – a man from Utopia, the subject of More’s famous book. This man’s job is to free More and take him back with him – but More refuses. And the story turns to a real event – More’s eldest daughter, the celebrated writer Margaret Roper, arranged to steal his head from the spike it was displayed on. Here she turns to the man from Utopia, who for all this Utopian background, finds himself smitten and unable to refuse her. 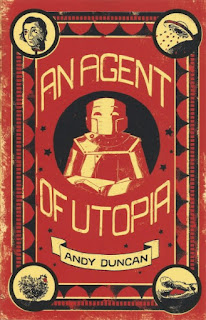 The other new piece is “Joe Diabo’s Farewell”, told by Eddie Two Rivers DeLisle, a Mohawk working the high steel. It follows him through one day, marked by an accident in which Joe Diabo, a veteran worker and one of the few Mohawks sticking with the “old ways”, falls to his death. Eddie, given the day off, and grieving, ends up picking up some extra money acting as a “real Indian” for the premier of a new movie about Custer. And in so doing encounters a real General who was at Little Big Horn, a pretty girl who seems to like him, and a bunch of the other “real Indians”, who are every sort of ethnicity except for Native American … but who are his kin anyway. One more encounter with Joe Diabo closes the story, which is lovely, and hard to describe – carried by voice, and character, and a perhaps paradoxical groundedness, given that much of it is set 30 stories in the sky. These two stories, along with “The Devil’s Whatever”, represent very well one of Duncan’s greatest strengths: all are steeped in the voice of their characters (and tellers), yet all three (or four) voices are completely different, and completely effective.