Today is Timothy Zahn's 68th birthday. He's perhaps best known for his Star Wars novels, but he's done a lot of pretty enjoyable SF on his own. And he's a fellow U of I grad -- a few years (8, I suppose!) before me. Here's what I wrote about the first book in a YA series that I read with enjoyment until the end.

Dragon and Thief, by Timothy Zahn

Timothy Zahn is probably best-known for his Star Wars novelizations, which seem to be fairly well-regarded among media tie-in books, and SW novelizations in particular. I haven't read them myself. He first appeared in the field with stories in Analog, one of which ("Cascade Point") won a Hugo, and with some military SF novels. I've found his writing (I've only read short fiction) fairly enjoyable -- he usually tells a decent story. I believe he has said that he has made enough money from the SW books to write what he wants nowadays. 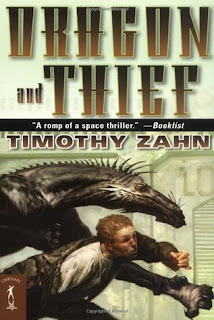 His new book [as of 2003], advertised as the first of a series, is Dragon and Thief. This is basically a Young Adult novel. I enjoyed it quite a lot -- it is quite satisfying not too ambitious space adventure. It is, to use that most cliche of terms, a good read. There are a few nice ideas incorporated into a fairly routine plot, with a story resolved acceptably in this book, as well as the beginning of a story arc that will probably be quite sufficient for a series.

There are two main characters, announced by the title. The Dragon is an alien called Draycos (the implausible dragon-like given name (possibly handwaved away in the text but so what) is one of a few lazy things about the world-building), a "warrior-poet" of a race of symbiotic beings. These folks and their host species are fleeing a genocidally evil alien race from another arm of the Galaxy, in hopes of colonizing a likely world in our arm. The advance team, including Draycos and his host, arrives only to find that they have been betrayed -- the bad guys are waiting and kill everyone except Draycos. And Draycos, like all his species, can only survive about six hours without a host.

The Thief is Jack Morgan, a teenaged boy who has been working criminally with his Uncle Virge for some time. He wants to go straight, and be a cargo-hauler with his Uncle's ship, but already they have been framed and accused of stealing some valuable cargo. They flee to an empty world -- which not surprisingly is the world where Draycos's people ended up. And it turns out that humans, such as Jack, are an acceptable host for the dragons -- so when Jack investigates Draycos's crashed ship, he finds himself with an unwanted guest.

The neat characteristic of Draycos's people is that they can occupy other dimensions, staying in contact with our 3-d space in 2-d form, as a sort of tattoo on their host. I thought that a really cute idea, and well-handled in the book. There is another secret about Jack that Zahn hides well for a while, which I won't reveal -- partly because I guessed it myself and had fun guessing it. At any rate Draycos agrees to help Jack figure out who framed he and his Uncle, and maybe solve that problem -- but in return he wants to stay with Jack as a host for as long as possible, and he hopes Jack will help him discover who betrayed them, and find a means of countering the threat of the genocidal aliens.

The story is fast-moving and fun and at least believable enough for this sort of book, and the main characters are enjoyable to be with. The book points a moral, mainly about Jack needing to learn that cooperation with another person for a larger goal than self-advancement is a good thing -- and it does so pretty naturally and without too much preaching. I liked it as very nice light reading -- I'll read the next book in the series for sure and probably the whole thing -- and I would think it an excellent book to recommend to early teenaged readers looking for good YA SF in pretty much the Heinlein Juvenile mode.