Last year on Tom Holt's birthday I posted a selection of my reviews of K. J. Parker's short fiction. So this year surely it makes sense to post a review of a Tom Holt book! This is one of several blackly comic historical novels he wrote, one of which, The Walled Orchard (originally published in two volumes as Goat Song/The Walled Orchard) is in my opinion one of the best historical novels of the past few decades. (I posted my review of that diptych here.) Alsd, Olympiad isn't as good as that, but it's enjoyable enough, and it's the only other Holt novel on which I had a review ready to post. 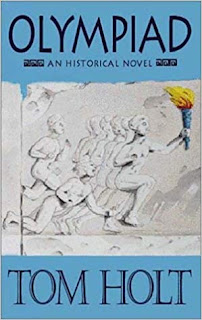 Olympiad is framed as a story told by two aging brothers in about 750 BC concerning the time more than a quarter century earlier that they got themselves stuck traveling around the Pelopennese recruiting athletes for what would become the Olympics. They are telling the story to a bored Phoenician trader who in his turn is trying to convince the Greeks of the value of this newfangled thing the Phoenicians have invented, where you make scratches on pieces of clay or something to help you remember things. Much of the thematic burden, then, is Holt's contention that we are witnessing the invention of history.

The main story involves the two brothers, along with their sister and a couple more people, being sent on a mission to find a bunch of athletes to meet at Olympus for an unheard of concept: Funeral Games without a Funeral. The idea is to arrange for their King's worthless son to look good doing something, because he's apparently pretty bad at everything else, but OK at some athletic events. Unfortunately, another faction wishes to obstruct them, and goes around badmouthing them at the various cities they visit, sometimes in quite evil fashion.

They eventually run into a wanderer who claims to be the unfairly deposed prince of an island city. And to their horror their sister falls for him, which makes it tricky when he turns out to be a jerk. Plus they don't believe his story. And some of the cities they visit are gone, and some aren't interested, and so on ... pretty much its a story of (fairly amusing) abject failure. Which is to say it's very cynical. One of my problems with it was that there are no admirable characters. I know that's a lame complaint, but it really is hard to warm to a book where no one at all is really likable.

Holt's skill is clear, and he gets off plenty of very funny lines and sets up plenty of (often painfully) funny situations, but I thought it only a fitfully enjoyable book. It's odd -- much of it is funny, much of it is penetratingly observed and sensible, the characters are believably portrayed (and seem consistently not people of our time) - it's really quite well done. It just didn't fully work for me.
Posted by Rich Horton at 5:30 PM