Today is China Mieville's 47th birthday. In his honor, then, here's what I wrote way back when about his third novel, The Scar. I should add, perhaps, that two of his later novels are better still: Embassytown and The City and the City are brilliant -- truly two of the best works of fantastika of the 21st century. 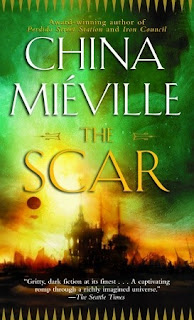 The Scar is China Mieville's third novel. His second, Perdido Street Station, was a major success, garnering him a Hugo nomination as well as plenty of critical acclaim and, unless I miss by guess, healthy sales. This new novel is set in the same world as Perdido Street Station, Bas Lag, and as such fits loosely into that vague subgenre sometimes called "Science Fantasy". That novel was set in the huge, corrupt, city of New Crobuzon. This novel opens with mysterious doings in the ocean, and then we meet the noted linguist Bellis Coldwine, who is fleeing New Crobuzon to the colony city of Nova Esperancia. A tenuous linkage to the events of Perdido Street Station is provided by Bellis's reasons for leaving: she was a former lover of the hero of Perdido Street Station, and she fears being rounded up as a potential witness after the rather catastrophic happenings in that book.

The ship carrying Bellis Coldwine (as well as ocean biologist Johannes Tearfly and a group of Remade prisoners including a man named Tanner Sack) does not get very far, though, before it is overtaken by pirates from the mysterious floating city Armada. Bellis, Johannes, and the other passengers and prisoners are taken to Armada, where they are informed they will live the rest of their lives. They cannot leave the floating city, but they will otherwise be allowed full citizenship. Tanner Sack and Johannes accept fairly eagerly, but Bellis is desperate to have a chance to return to her beloved home city. Soon she falls into league with the mysterious Silas Fennec, a spy from New Crobuzon who is as desperate as she to return home, in his case because he has information of a coming attack on their city. It becomes clear that the leaders of Armada are engaged in a mysterious project, and Bellis becomes a key figure when she finds a crucial book in a language that she is a leading expert in. She learns that Armada is planning to harness a huge sea creature called an avanc, and to have the avanc tow the floating city to the dangerous rift in reality called the Scar, where it might be possible to do "Probability Mining". More importantly to her and Fennec, her new influence gives her the chance to get a message Fennec has prepared back to New Crobuzon.

The story takes further twists and turns from there -- it's very intelligently plotted, with the motivations of the characters well portrayed, and with plot elements that seem weak later revealed, after a twist or two, to make much more sense. But it's not the plot that is the key to enjoying the book. The characters are also fascinating. Besides Bellis and Tanner and Fennec, there are such Armadan figures as the Lovers, male and female leaders of Armada's strongest "riding", who scar each other symmetrically during their S&Mish lovemaking; Uther Doul, the dour and enigmatic bodyguard with a sword forged by the creatures who made the Scar, a sword that flickers through multiple possible outcomes, possible paths, at once; and the Brucolac, a vampir, and a fairly conventional one, but still strikingly portrayed.

As in Perdido Street Station, Mieville invents fascinating part-human species, hybrids of humans and other forms, in this book most strikingly the anophelii, mosquito men, and, more scarily and affectingly, mosquito women. In the end it is Mieville's fervent, sometimes overheated, imagination, that drives the book. His descriptions of cruel and dirty places, and odd creatures, are endless intriguing. Yes, he sometimes luxuriates overmuch in grotesquerie, but I suspect any application of discipline to his imagination would lose us more neat visions than we might gain by avoiding the occasional silliness or vulgarness. The book is also a bit too long -- some of this is the author's delight in showing us this or that cool gross notion he has had, but also I think his sense of pace is weak. A fair number of scenes, I think, could readily have been excised or shortened. (Such as most of the grindylow "interludes".) The other weakness is one fairly common in certain fantasy: when so many weird magical things are allowed, on occasion it seems that things happen, or characters gain powers, for reasons of the plot only. But though the book is a bit overlong, it remains compelling reading, and though the magical happenings aren't always fully consistent, they really don't strain suspension of disbelief too much: on the whole, this is another outstanding effort from Mieville. I'd rank it about even with Perdido Street Station, and perhaps slightly better on the grounds that the plot really is worked out quite well, with plenty of surprises and an honest, satisfying, resolution.
Posted by Rich Horton at 8:13 PM