Old Besteller: The Marquis and Pamela, by Edward H. Cooper

Old Besteller: The Marquis and Pamela, by Edward H. Cooper 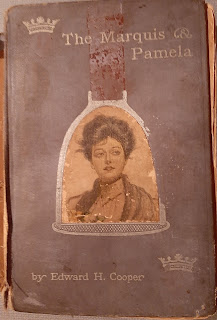 Edward H. Cooper is one of the more obscure novelists I've encountered in my reading of early 20th Century popular fiction. He was born in Newcastle under Lyme (not to be confused with Newcastle upon Tyne, the much more famous and larger city) in 1867, was crippled from birth, and died in 1910. He went to Oxford and became a journalist. He also wrote novels such as Richard Escott, Resolved to be Rich, and the book at hand, The Marquis and Pamela. He seems essentially fully forgotten nowadays (with reason, based on this novel, anyway,) and I doubt this book sold well enough to be called a bestseller.

My copy seems to be a first American edition, in poor condition, from Duffield and Company in 1908. (The English edition was from Chatto and Windus.) It's illustrated nicely enough, by Julia Roper. It's signed in pencil by, I think, V. Siebert Romberg.

I bought it at an antique store and read it on a lark, expecting a light romance. And indeed, it opens in this fashion, at a party among London's racing and gambling set. (Actually, the people involved, and the timeframe, seem very similar to the miliue of Shaw's "Pygmalion" (and of course, of My Fair Lady.)) The Marquis of Seaford is an older man, very well-respected as a good horseman, and a man who will always pay his debts. Pamela is a 20-something woman, very beautiful, with some money of her own, and ready to find a man to marry. Two men are the leading contenders -- a wealthy but dull scholar, Sir Norman Stanier; and a dissipated and financially unstable younger man, Lord Whitmore. Pamela doesn't really seem to much like Stanier, but he does have money; and Whitmore is more attractive, but something of a mess. 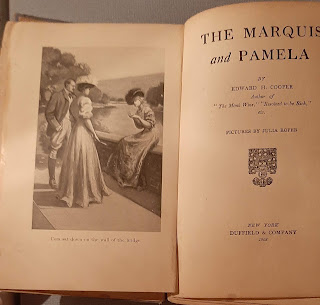 The races at Ascot are coming up soon, and we gather that Lord Seaford's horse is a heavy favorite. He will surely back his horse with a large bet. And then we find that there is a plan to fix the race, so that Lord Whitmore's horse wins instead. Seaford will be nearly ruined.

More details come out -- Seaford has been helping Lord Whitmore financially for some time, but Whitmore has betrayed him in many ways. Whitmore has had several mistresses, and has had children with them, and his latest mistress is pressing him for money to support her and her two babies after she has been discarded. Seaford is warned off betting on his horse by a "gypsy" ...

We come to a crisis. To no reader's surprise, it becomes clear that the Marquis of Seaford is in love with Pamela, but thinks he's too old for her. (A reasonable thought -- he's 55.) And Pamela seems to return his affection. And the more we learn about Whitmore, we realize he's an out and out rotter. What will happen? Will Seaford save himself by listening to the gypsy? Will their set come to their senses and banish Whitmore from public life for his many sins? And what about Sir Norman Stanier, who seems a basically good man?

Spoilers to follow, not that it matters over much ...

The author heavily intervenes at this point. He tells the reader, in no uncertain terms, that Lord Seaford is a horrible person. (And he shows his neglect of the tenants at his estate, to emphasize the point.) He also tells us that Pamela is a horrible person (she's selfish, and she's cruelly leading Whitmore and Stanier on, and she really has no redeeming qualities save her beauty.) OK, so everybody is awful? What to do ...

Seaford bets on his horse as planned, and the scheme to fix the race goes through, and he is almost ruined. (I wondered how such a transparent and obvious race-fixing went unpunished.) Whitmore, still under great financial pressure, presses Pamela to marry him. But his mistress has revealed Whitmore's sins to Pamela, and she rejects him. Whitmore commits suicide. Pamela, to her shock, is blamed by society, and cast to the margins. She is "rescued" by the odious man who (it turns out) is behind the race-fixing scheme, and they plan to get married, though she finds him repulsive.

Then, somehow, at the end, the Marquis comes to his senses (barely) and realizes he still loves Pamela -- though he hates her for causing distress to his friend Whitmore (there are homoerotic hints in the description of the Seaford/Whitmore relationship, though I think they were unintended.) So the Marquis spikes the marriage plans, and the book ends with Pamela and Seaford in a romantic clinch ...

It's just such a crudely manipulative mess! Some of it could have worked with a more skillful writer (and it should be said that Cooper's prose and imagery are sometimes well-handled -- but not his characterization!) The idea that Pamela and the Marquis and indeed their whole set are dreadful people is actually quite believable, but isn't really sold by the bulk of the book. And questions remain -- What about Seaford's tenants? And if he was ruined by his big bet on his horse, can he still afford to marry Pamela? And ... And ... (I haven't mentioned the saintly Biddy and her upstanding intended clergyman husband, who try and fail to set Seaford straight and to save Whitmore's life ... that's another detail that just seems forced in.)

Sometimes, indeed, popular fiction of the past is forgotten for very good reasons!