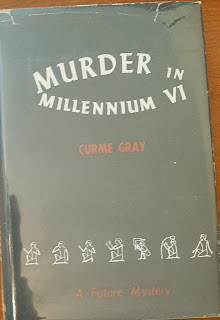 This novel, published in 1951 by the important early SF book publisher Shasta, very quickly established a reputation as a nearly incomprehensible novel -- incomprehensible because it explains almost nothing about its future -- the intent is to be read as a comtemporary work,set in "Millennium VI", and as such not to describe thimgs that would be common knowledge to its supposed readership. Over the decades it's become sort of a talisman -- "Read this and marvel at how inpenetrable it is!" As such I've known for years that eventually I'd try to read it, and the time finally came. Short version -- it's at times difficult, a bit dizzying, but the basics are really pretty readily worked out. It's a decidedly interesting experiment, and with additional editorial input, it could have been something really special. It falls short, alas, but I still think it's worth reading.

The book has only been reprinted once, in 1952, as part of an omnibus edition offered by the Unicorn Mystery Book Club. The other books in that omnibus were When Dorinda Dances, by Brett Halliday (best known for the Mike Shayne mysteries); The Far Cry, by Fredric Brown; and The Virgin Huntress, by Elisabeth Sanxay Holding. I think it's fair to say -- even wholly ignorant, as I am, of the Halliday novel -- that that is a pretty damn impressive omnibus, even only considering the Brown and Holding novels. 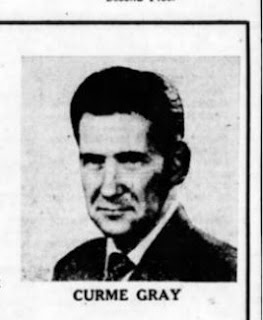 Curme Gray himself was for a long time -- still is, to some extent -- a mysterious figure. But in recent years some details have been tracked down, even a picture. (The picture attached was found by Paul di Filippo from a Battle Creek, MI, newspaper, accompanying an advertisement for a book signing -- evidently at the time this book was published Gray lived in Battle Creek.)  He was born in Indiana in 1910. His father or grandfather appears to have been in the shoe businees. By 1940 he was living in Cicero*, IL, a suburb of Chicago, and had a wife named Madeline. By the 1960s he seems to have been in Denver, and involved in local theater. But his interest in theater goes much farther back: there are apparently at least two plays copywrighted in his name. from around 1940, when he was in Illinois. He died in 1980.
(*My high school wrestling coach was from Cicero. At a guess he was not too much younger than Gray -- maybe he knew him?)

So what's up with this book? It opens with the scene of a woman, having just awakened, heading to meet her mother, but colliding with her much smaller father (Alec), and rebuking him. The mother, Wilmot, and the daughter, Hilda, converse briefly, first by voice, then by "telement", about their coming trip to see the Matriarch, and Hilda's desire for a newly created position as the Matriarch's secretary, and her anger that her twin brother Victor will also meet the Matriarch and apply for the new position -- even though males are ineligible. The narrative switches to first person -- Victor has been monitoring their conversation, by both "telepathy" and "clairvoyance". Victor and Alec speak, and we learn that Alec owns three "records" from Ancient History. It seems Alec is fascinated by that time period, and even has learned to read the records, which are described strangely -- but in a way so that we recognize them as printed books. No one (except Victor and Alec) seems to read -- everything transmitted via telement is preserved in Archival Telement, or AT. Alec's three books are called Palmer's Method, Hobbies, and Crime, a History. Victor, using what he learned from Palmer's Method, is making his own record, by cutting up pieces of cloth and marking them. In this diary he preserves things he learns, and thinks, that will not be part of AT -- including his somewhat clandestine love affair with a woman named Barbara Porter. (Romantic love, we learn -- like death -- is a forgotten thing in this future.)

I've gone into greater detail than I normally would partly because the strangeness of the future needs more description than in many books. As we read further -- though much of this on a second reading is already indicated in the first chapter -- we learn that this is set 6000 years or so from now. The world is ruled by a Matriarchy. There is only one race (apparently descended from Asians though it could be just a future mix.) Women are significantly larger than men. Neither sex has secondary sexual characteristics -- indeed, both are bald. These characteristics seem to be maintained partly by selective breeding. Most communication is by telepathy -- something like personal radio. Clairvoyance seems to be a way of seeing what is happening elsewhere. (We learn later of private sorts of telepathy, and of a special form of telement called communion, in which perhaps thoughts are directly shared.) There is no crime, and no death. There are a few different varieties of women -- notably Menics (menial workers) and Clerics, of higher rank. Men, who do not work, seem either to be essentially house-husbands, or to reside forever in the "Stud". The extended lifespans also mean that maturity is not attained until the age of nearly one hundred.

The meeting with the Matriarch is complicated, because Barbara Porter is there as well, and it becomes clear that everyone with an audience with the Matriarch is applying for the same newly created position of secretary. The job should be Hilda's, because Victor is a male, and Barbara is of lower status (as Wilmot is the second most powerful woman in the Matriarchy.) Indeed, we now learn, Barbara is a highly unusual woman -- she has breasts, and is smaller than most women. (She even uses lipstick, it seems!) But to Victor's dismay, Barbara has rejected him for another male. And, indeed, Barbara and Victor's association was highly irregular -- females are supposed to choose males at the Stud. (It is never made terribly clear exactly what goes on at the the Stud.)

Much of this becomes somewhat irrelevant when, just as the audience with the Matriarch is supposed to commence, it is clear that she is acting very oddly. Indeed, Alec and Victor rush forward -- she seems to be asleep! But, no -- she is not asleep, she is dead. And that is impossible, for no one dies! (This is one reason Barbara and Hilda, who are one hundred years old, have not found a position.) After much divagation, it is determined that the Matriarch has been murdered -- but by whom? It seems to be a locked room mystery.

The main action of the novel concerns the untangling of the mystery, of course. Alec is the first suspect, and he is soon found dead -- by suicide? Is this a confession? The question of motive arises -- but there are many plausble motives. Alec wanted, we learn, to restore the historical Patriarchy. Hilda wanted her position. Wilmot had long coveted the (elective) position of Matriarch. Barbara Porter's Aunt Gertrude resents the power held by both the Matriarch and Wilmot. Victor is suspect because he's Alec's son, and because of his irregularities. The question of method revolves around scissors -- and we know that Victor has a pair. But so, it appears, did Hilda. And perhaps the scissors are just a blind alley -- there are other means of murder. Other mysteries arise -- for death is not really wholly abolished, but people tend to forget it. It turns out that a past disaster (a plane crash) wiped out everyone in Alec's family. But no one (besides Alec) remembers this.

The solution (solutions?) to the murder mystery come in a dizzying sequence, with every one of the main characters at one time identified as the murderer. The final resolution is kind of neat (turning on an aspect of future technology) -- and yet, to my mind, it remains a bit ambiguous. (In a good way, I'd say.) The other outward plot element is the romance (?) between Victor and Barbara -- Barbara seems to run hot and cold, and Victor -- he's determined to marry Barbara, but hardly -- chivalrous? All in all, the sexual poltics of this book are decidedly retro -- arguably that's part of the theme, to be sure. But it can be hard to take.

In a way, though, these aspects aren't what's most interesting about Murder in Millennium VI. Decoding the true nature of this future is what involves the reader (in 1951 as much as in 2022, I think.) The social and sexual organization is central -- looked at naively it seems to be about a cyclical change from Patriarchy to Matriarchy and back again to Patriarchy -- but I think perhaps the resolution suggests an evolution to a more equitable arrangement. (This is not much addressed, though.) Another question revolves around death -- how has it been (mostly) eliminated in millennium VI, and is its (potential) restoration a good thing? There are a host of technical issues that are described but never discussed -- people seem almost never to be outside, for example; or, what really goes on in the Stud?; or how does the transportation work?; or what are the homes really like? with the strange lighting? etc. etc.

The overall affect is effectively weird, if not quite convincing. The novel works in that sense. But as I hinted at the top, some of the confusion may be due more to ineffective writing -- and I think some hard editorial work might have resolved some of that. And to be honest the overall theme, especially the Matriarchy vs. Patriarchy aspect, and the general depiction of gender relations, is retro in a bad way, even rather unpleasant. This future doesn't seem a future we're headed to, and the questions the book poses about this future aren't really sensible, in the end. But for all that, I'm glad I read it It's an intriguing and quite different imaginative product. And it's not all that long! So -- worth a read if you can find a copy, and a reprint might be worthwhile (perhaps attached to some critical analysis.)