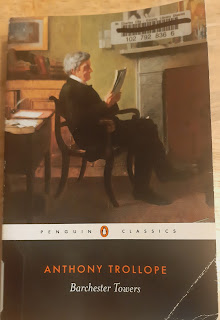 Many decades ago, when I was a teen, I read The Warden, the first of Anthony Trollope's Chronicles of Barsetshire. If I am to be honest, I remember nothing of that novel except that I enjoyed it -- but never went on to read any more. But in recent years it has become clear to me that I have an affinity for Victorian novels, and it certainly seemed that returning to Trollope was something I ought to do (particularly as several friends recommended him.) And not long ago at a charity book sale I bought an ex-lib copy of Barchester Towers, the direct sequel to The Warden, so I decided that would be my next Trollope. (I have always pronounced his name tra-LOPE, but I read a quip from some English writer, can't remember who, about a friend who would greet him in all innocence saying "I was just up in my room with a Trollope", suggesting a different pronunciation.)

I've given this review an "Old Bestseller Review" heading, reflecting the original focus of my blog. Was Barchester Towers initially a bestseller? As far as I can determine, probably not, but it sold reasonably well, and, with The Warden, essentially established him as a significant writer. I believe many of his subsequent novels sold very well indeed. I also note that this review is quite long -- probably too long. Perhaps I have been influenced by Trollope's own prolixity! (Barchester Towers is long but not terribly so -- perhaps about 200,000 words, maybe a bit less -- but later novels were often very long indeed.)

Anthony Trollope (1815-1882) was the son of a barrister, and more distantly descended from landed gentry, and a baronet. (The baronetcy eventually was inherited by Anthony's son Frederic, presumably after the death of some cousins.) His mother was a successful writer (a profession she turned to in part because of her husband's business failures.) Much of the family, but not Anthony, moved to the US for a time, and later (including Anthony) to Belgium. Anthony was educated at "public schools" (Harrow and Winchester) which he hated. He got a position at the Post Office, which eventually led to travel all around Ireland and later England. He began writing shortly before his marriage (to Rose Heseltine, in 1844.) His early novels included a few set in Ireland, and met with little success. (I have read that sales of these books were in the low hundreds.) But The Warden (1855) achieved good notice, and Trollope eventually became very popular. He published some 40 novels, with two main series, the Barchester books and the Palliser books (and the two series are apparently connected) as well as many standalones, perhaps most notably The Way We Live Now (based in part on his unsuccessful run for Parliament.)

Barchester Towers opens with the death of the Bishop of Barchester, Dr. Grantly. His son, the Archdeacon, is widely expected to be named the next Bishop, but there are political reasons that may not occur: the Whigs are now in power, and the Grantlys are Tories, a secular difference which seems also connected to differences within the Church of England, with the Grantlys being more "high church" (or "bells and smells") and the other side more low church, nearly "evangelical". And, indeed, the new Government selects a Dr. Proudie instead of Dr. Grantly. And Dr. Proudie has a formidable -- and very evangelical -- wife. And his wife insists that a certain Obadiah Slope be chosen as the new chaplain. Slope is, besides his somewhat fanatical low church leanings, a very ambitious man, and quite a schemer.

Also involved is Mr. Harding, formerly the Warden of Hiram Hospital -- he was unfairly forced to resign in The Warden. Mr. Harding has two daughter -- Mrs. Grantly, the Archdeacon's wife, and Mrs. Eleanor Bold, who has recently been widowed, and who has a young son. Mr. Harding has some hopes of being restored to his position at the hospital.

All this is presented not just in personal terms, nor in political terms, but in financial terms. In this book, there is a great deal of attention paid to how much money a clergyman is paid (especially inasmuch as the Church of England has recently reformed its payment practices,) and to how much a woman might have inherited (which in practical terms means how much a man will take control of upon marriage.) And the plot of the novel turns not just on the maneuverings surrounding the various potentially open livings for the clergy, but on the presumed possible marriage of Eleanor Bold, who, as a young and beautiful widow with a rather decent portion is eligible indeed.

To summarize very briefly (I hope) we witness the struggle over the Wardenship of the Hospital -- the main claimants being the former Warden Mr. Harding, and the rather needy Mr. Quiverful, who is worthy enough but whose main claim is his need to support his fourteen children -- and the issues here revolve more about Mrs. Proudie and Mr. Slope desiring to have a Sunday School attached to the Hospital, but more significantly Mr. Slope's decision to shift his support to Mr. Harding in the hopes that that will make him a more attractive suitor to Mr. Harding's daughter Eleanor Bold. But beyond that living there is the small church of St. Ewold's, to which the Archdeacon attracts the respected Cambridge scholar Mr. Arabin. And finally the Dean of Barchester dies, and immediately it seems Mr. Slope is the leading candidate to replace him.

On the romantic front, the return to Barchester of the prebendary Dr. Vesey Stanhope from Italy muddles the waters. Dr. Stanhope had been drawing a clerical salary but performing no duties while living in Italy. The new Bishop insists he return (or so does Mr. Slope -- and in this instance Mr. Slope is surely in the right). The Stanhope children include a feckless young man, an artist of no renown, who is a thorough spendthrift, and his older sister begins to scheme to marry him to Eleanor. But Mr. Slope also has designs on her. The late entry in the field is Mr. Arabin, who doesn't have the same financial motives (though Trollope reminds us that no matter Mr. Arabin's concerns, a nice fortune will do him no harm) but who clearly begins to form an attachment. The fly in all this ointment is the other Stanhope, Signora Madeline Neroni, a very beautiful but not terribly moral woman, who made a disastrous marriage to an Italian man, and who lost the use of her legs in an accident. She takes an interest in pretty much any man, in this case including Mr. Slope and Mr. Arabin ...

The climax of these events occurs in great part at a party thrown by an aging and rather out of date brother and sister, the Thornes, ostensibly to welcome Mr. Arabin to his new post at St. Ewold's. This takes up several delicious chapters, and we see the entire spectrum of Barchester society, from a Countess down to laborers -- it's a gentle comic masterpiece, and it forms a well constructed resolution to the questions of the plot. I won't detail how that works out (though Trollope on occasion fairly openly tells his readers what to expect) -- but it's quite satisfying. And, indeed, though some people's specific hopes are dashed, it has to be said that all the characters more or less land on their feet.

I found this novel supremely pleasurable to read. Trollope is a very funny writer (in a very quiet way) for one thing. He is quite acute in his depiction of the social order of his time. He is (mostly quite affectionately) observant of the weakness and folly of his characters -- "good" and "bad"; and he loves to present the careful machinations of all the characters leading to unexpected consequences. The only real villain is Mr. Slope, and even he, though oily and unpleasant, is presented as fairly intelligent, and sometimes in the right. (Well, perhaps Vesey Stanhope is a bit of a villain in a less active way -- at any rate, he is morally profoundly negligent.) The prose is Victorian prose at its fullest -- many contemporary readers lose patience with such prose -- the long sentences, the fairly obtrusive narrator, the overt means of characterization (telling instead of showing.) But I love it -- and if you have the taste for that prose, Trollope is a master. Perhaps one of the elements that is the hardest for present day readers is the complete acceptance of the Victorian English view of women's proper place -- in the home, as nurturers. Trollope's women have a great deal of agency, and also intelligence, but they do accept that their role is to be wives and mothers. (To be sure, a woman like Mrs. Proudie uses her position as the Bishop's wife to wield a great deal of power, most certainly over Dr. Proudie as well as more widely in the diocese.)

Finally -- a note, maybe a question. The novel has very many characters who are clergymen, and they have a dizzying array of titles. Many I know well: Archbishop, Bishop, Vicar, chaplain, curate. Others I recognize but can't quite place in the hierarchy: Archdeacon, Warden, Canon, Dean. Some I really don't know at all, like precentor and prebendary. Does anyone know more detail about this?

And one small additional note -- the previous Victorian novel I read is Vanity Fair, from one decade earlier. It's a very different novel in tone, of course -- but I did detect some parallels between the virtuous (but very foolish) Amelia Sedley and the virtuous (and actually fairly intelligent) Eleanor Bold. (Mostly their perhaps excessive devotion to their less than perfect -- and dead -- husbands, and their deep love for the sons. Also, more trivially, they are both widows who eventually remarry.)