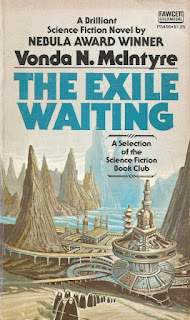 Vonda N. McIntyre was born in 1948 in Louisville, and died, only 70 years old, in 2019. She began publishing in 1970 with "Breaking Point", in Venture (the second iteration of a short-lived (both times) companion to F&SF), and in 1973 published "Of Mist, and Grass, and Sand" in Analog -- which won the Nebula for Best Novelette. It became her second novel, Dreamsnake, and that won both the Nebula and Hugo. She published several more generally well-received novels through 1997, when The Moon and the Sun appeared, and won her another Nebula. But that was her last novel, and she published only about a half-dozen further short stories in the couple of decades before her death. (I reprinted her last story, "Little Sisters", in The Year's Best Science Fiction and Fantasy, 2016 Edition.) I don't know wny she mostly stopped writing (or selling) -- she was a first rate writer. (A good portion of her output was media tie-ins, also, and her Star Trek novels are quite well regarded.)

So, I mentioned her second novel, and some later ones, but what of her first novel? This was The Exile Waiting, from 1975. Its first appearance was actually the Science Fiction Book Club edition. I bought the paperback when it appeared -- my notes in the book say I got it from Waldenbooks in Fox Valley Mall (a couple of miles from my house) in April 1976. I read it and liked it a good deal. And so I was happy to be pressed to reread it when we chose it for the book club that Mark Tiedemann runs ... 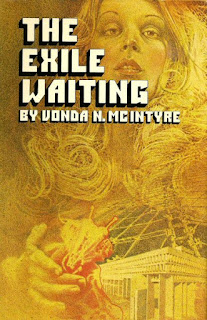 And, you know, it holds up. On rereading I felt it very clearly a first novel, with some of the problems of many first novels, but lots of the exuberance too. Like many first novels there is a sense that the author threw in a few too many ideas, and that the structure (perhaps especially at the beginning) is a bit loose ... but in the end it's very enjoyable and quite moving.

The book is set on earth (uncapitalized, oddly, though it is clearly meant to be our Earth) a long time in the future, after a nuclear war. As such, it's a post-Holocaust novel -- Mark Tiedemann pointed out that this was rather late for the at one time extremely common trope of setting a story in the distant aftermath of a nuclear war. Mischa is an adolescent girl (probably about 14 ... but her age doesn't come through very well) living in a place called Center, almost a hive for the people living in the blasted wasteland. She is a thief, as was her now drug-addicted and dying older brother Chris. She also has a power, as with the other in her family -- sort of an empathic/near telepathic ability to sense others' minds. This is a decidedly mixed blessing, especially as her much less mentally functional younger sister Gemmi has such a strong ability that she can compel Mischa to come to her -- which she does when their abusive uncle forces her to summon Mischa -- mainly to get money. Mischa's dream is to escape to the "Sphere" -- that is, the relatively near star systems that humans have colonized; and to bring Chris with her in hope of a cure for his addiction (presumably, he started using the drugs to ecape Gemmi's pull.) And it becomes clear to her that her only shot is to find a way to get to the Palace, and to convince the aristocrats there to give her a job on a spaceship.

There are two other central characters. Jan Hiraku is a young man who has promised to bring his blind old friend back to earth for burial, and he has gotten passage on a starship. The starship is crewed by what seem a group of raiders, led by two curiously linked men who call themselves Subone and Subtwo. They were raised together as part of an experiment intended to make them mentally linked, and having escaped that situation they are beginning to establish independent personalities. (Their backstory is detailed in McIntyre's short story from the Delany/Hacker anthology Quark/4, "Cages", which I understand is included in the recent rerelease of The Exile Waiting (from Handheld Press in 2019).)

So -- Jan, unconnected with the raiders, serves as sort of an outside observer/narrator, though eventually he becomes a friend and mentor to Mischa. Mischa's attempt to infiltrate the Palace fails and she is whipped for it. But more or less simultaneously, the raiders' ship lands nearby, in storm season when no ships come -- the combined abilities of Subone and Subtwo make this possible. They arrive at the Palace, evidently intending to take over -- but are suborned, more or less, by the decadence and indifference of the ruling group. Meanwhile Subtwo is trying to separate from the more brutish and immoral Subone, so while Subone appears to enjoy being assimilated into the decadent life of the Place, Subtwo is disgusted by the slave culture revealed to him. He falls for Madame, the slave who serves as housekeeper to the ruler, and tries to arrange her freedom, while planning to leave with his ship as soon as possible. Jan and he rescue Mischa, and somewhat fortuitously begin to train her, and discover that she is a mathematical genius. (This is a bit of tired cliche, one of the "first novel" faults.) Plans for Jan, Subtwo, Madame, Mischa, and Chris to escape back to the Sphere seem well on the way, until Mischa's unseverable connections to her family intervene -- and Subone's cruel reaction to the presence of Chris in their quarters drives a crisis.

Jan and Mischa are forced to escape underground after attacking Subone in trying to rescue Chris. They encounter a group of mutated humans, cast out because of the old tradition of post nuclear societies trying to control mutations. Meanwhile Subone and Subtwo are chasing them -- Subone compelling his "pseudosib" to help get revenge on Mischa for attacking him. Mischa -- again quite coincidentally -- meets one of her highly mutated brothers ... Well, the natural result ensues -- with the mutants' help they escape back to Central, and in the process foment a rebellion that should lead to better treatment for the mutants, and also freedom for the slaves. And Subtwo finally manages to escape Subone's influence and their escape to the Sphere becomes a reality. 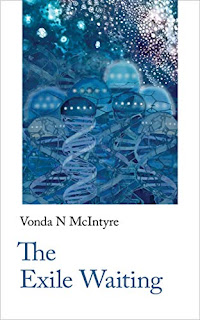 Told as baldly as I've stated it this final development seems a contrived and only too familiar (and too easy) resolution -- and it is, I suupose, except McIntyre's writing is very effective, and it's exciting, and quite moving. It's really a case of a first novelist's talent winning over her inexperience, I think. I liked the characters, and I wanted them to win. I'd actually have liked to see more stories in that future -- in the Sphere, mainly, and perhaps following Mischa's life. Apparently Dreamsnake is set on the same future ruined earth -- but we don't really see the Sphere in that book. (It's not clear to me whether the action of Dreamsnake is set prior to The Exile Waiting, after it, or at a roughly parallel time but different place on earth.)

It is nice, I think, to return to a novel you remember enjoying 45+ years ago, and to find that it pretty much holds up! That doesn't always happen, but it did in this case.