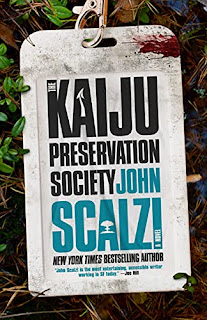 Here is a novel that wears its time of writing on its sleeve.The Kaiju Preservation Society opens in early 2020, just as the pandemic is staring. Jamie Gray is working for a food delivery service, and sees a great opportunity for his company -- perceiving that the market for delivered meals is about to explode, Jame is eager to present this dea to the CEO -- only to be fired ...

Let's pull back a bit. John Scalzi needs little introduction -- he's been writing vary enjoyable SF novels for nearly two decades. He's won a Campbell, a Locus, a Dragon, and a couple of Hugos. And somehow he became a lightning rod for the Sad Puppies despite, as far as I can tell, writing EXACTLY the sort of old-fashioned, plot and adventure and cool SF idea-centered stuff they claimed to want! Well, to use an appropriate word, whatever! I like his stuff, and I read it regularly, and so I was happy when our book club chose his brand new novel for our next read. (In this case, I bought the novel through Audible, so I listened to it rather than reading it. The reader, who did a fine job, is Wil Wheaton.)

To continue -- Jamie is humiliatingly forced to accept a gig job workiing for the same company, delivering meals. And in the process Jamie meets a guy from college, a guy who is impressed with Jamie's knowledge of SF (knowledge that almost led to a Ph. D.) And when it becomes clear that Jamie is facing impossible financial pressures due to a) not having his old job; and b) the pandemic; this guy, Tom, offers Jamie a job, for a group called the KPS. A really really well-paying job, but with a catch -- it's in a remote area, out of reach of connection to cell networks, and potentially living a little rough. But, hey, what's the alternative? And the job seems perhaps to have some connection to Jamie's SF knowledge?

Soon Jamie is in Greenland, still wondering what's going on. We can guess, of course, given the title of the novel. And, indeed, KPS stands for Kaiju Preservation Society, and once in Greenland they travel to a secret base, and go through a portal into an alternate Earth. An Earth with conditions that allow for the existence of 100 meter tall monsters. (They are powered by biological nuclear reactors!) Jamie's job is to "lift things" (and the novel has a lot of fun with that.) Everyone else is a Ph. D., including the other newbies, with whom Jamie soon becomes very friendly.

The first large chunk of the novel is all about explaining what's going on, which is pretty fun -- wildly improbable but clever rationalizations of the Kaiju biology, amusing training sequences, references to a certain famous Kaiju which crossed over to our Earth near Japan thanks to a nuclear explosion (nuclear explosions thin the barrier between worlds ...) There's a lot of camaradie between the various KPS members -- they are a genuninely nice bunch. The eventual plot concerns first an effort to get a pair of Kaiju to breed, and second, a job Jamie is given to shepherd various visitors -- government official, military, scientific higher ups, and, of course, corporate sponsors -- around the base -- it seems that a chance to see real Kaiju is quite the lure. The actual conflict comes fairly late, involving an attempt to bring a Kaiju to our Earth to harvest some genetic material ... which turns out to be a really bad idea.

The novel is very light (though some terrible things happen) and it's very enjoyable. Scalzi's narrative voice is as usual delightful. A lot of it doesn't make a ton of sense, but it really doesn't have to -- the attempts to have it make SF sense are entertaining anyway, and we're not really expected to believe it. An afterword explains the genesis of the novel -- the stress of the pandemic, not to mention a maybe Covid maybe not illness, made it impossible for Scalzi to finish the more serious novel he had planned. He needed relief -- and the idea for this novel came to him, and he finished it in record time (by my lights -- maybe it's normal for Scalzi.) He described it as a "pop song", which seems entirely correct.

I liked it -- it's short and swift and fun. I do have one quibble, and it's a quibble I have about a lot of recent fiction -- the villain is a maximally, cartoonishly, evil corporation. Evil corporations are the lazy default villains these days, and certainly you can find a lot to complain about in corporate actions. But what this corporation gets up to is pretty extreme. And -- the novel takes on the stresses of the pandemic and such nicely enough. But in 2022 we have additional stresses, and a reminder that for real maximal evil a consciousless autocrat of a nation state is a much better candidate than a mere profit hungry corporation.

[Note -- I've modified my original review, thanks to a hint from John Scalzi's editor, Patrick Nielsen Hayden. I had assumed Jamie Gray was male -- but the the novel carefully does not specifiy. Indeed, the other characters are referred to as he, she, and in one case they -- but we never learn Jamie's pronouns. This is, I suspect, easier to do in a first person narrative! It was a bit tricky for me to work around all the "he"s in my original draft without using "they".

I will offer a couple of defenses. The first is simple -- I did not read the novel, I listened to it. And the narrator, Will Wheaton, is male. And for a first person narrative, it's pretty natural to assign the narrator's gender to the first person character. Beyond that I'll suggest that there is one ambiguous marker that the Jamie might be male -- his job is to "lift things", and lifting things implies upper body strength, which is unevenly distributed between males and females. That said, the other person in the novel whose job is to "lift things" is explicitly female. The novel features no romantic subplots, and indeed I spent a tiny amount of time wondering whether or not Jamie is gay or straight -- there is no evidence either way (that I detected.)]