Archibald Marshall was the penname used by Arthur Hammond Marshall (1866-1934), a British journalist and novelist. He seems to have written primarily realistic novels of British contemporary life, set prior to the first World War. I was to an extent reminded of some novels my mother used to read, by "Miss Read" (though those, I believe, were set later) -- contemporaries compared him to Trollope, which seems a huge stretch to me, though I suppose he may have aspired to that status. He seems to have been fairly popular, especially (says Wikipedia) among American readers, though he was not so successful as to show up on the Publishers' Weekly lists of the top ten bestselling novels of the year. He wrote at least one SF novel, Upsidonia, from 1916. 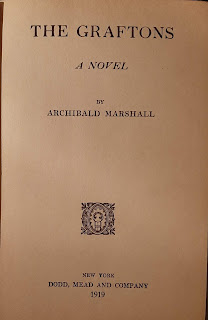 The Graftons is from 1918, or so the copyright says. My edition, possibly an American first, is dated 1919 on the title page. It's published by Dodd, Mead. There is an introduction (dated March 1918) by the author, which states that it "deals with the same characters as Abington Abbey". Abington Abbey was an earlier novel (though Wikipedia curiously dates it to 1919.) Marshall refers to criticism of that novel (and futher criticism presumed to follow of The Graftons) for not dealing with the impact of the War, and he demurs that he cannot deal with the effects on society of the War until it is concluded, so he has set his novels in the decade or so prior to the War. He admits that his characters doubtless face a potentially tragic future, and that at least one of the young men in the book will likely have died.

The Graftons are a family from the City now occupying Abington Abbey. The father is George, a widower, and he has three daughters (Caroline, Beatrix, and Barbara), and one son, also called George. As the novel opens, the Rector of Surley, a local church, is dying, and the question is who should succeed him? The main candidates are the Rector's son, who is perhaps too inexperienced, but well liked; and the rather pompous and annoying Vicar of Abington, A. Salisbury Mercer. The gift of the living of Abington is in George Grafton's hands, and so there's a problem -- the Grafton's (and most everyone else) cordially dislike Mercer, but they don't think they should foist him on Surley either ... So this all seems to be a reason people might compare Marshall to Trollope. But this whole issue is quickly resolved, in a generally satisfying fashion (and these chapters have some nice comic elements.)

The rest of the book primarily resolves around the love affairs of Caroline and Beatrix. Beatrix is the more worldly of the two older girls, and we soon gather she had thought herself in love previously with a man who turned out to be rather a cad. (I assume this was dealt with in Abington Abbey.) There is a man named Dick Mansergh, a Navy man, who is clearly besotted with her, and he's of the right class and has the right money. But does she love him? As for Caroline, she is a country girl at heart, and she falls for Maurice Bradby, who is apprenticed to George Grafton's property agent. As such Bradby is distinctly of a lower class than the Graftons, so their relationship will raise questions.

Of course all is resolved pleasantly -- it is that sort of novel. There is even the possibility of a remarriage for George Grafton, to a pretty (and rather rich) local widow, some years younger than him. I thought this subplot resolved in a clumsy and annoying fashion, actually.

It's a very pastoral book, quietly preachy in a classic "Little England" fashion, very much plumping for the virtues of English country life, and of the class system, etc. The writing is fine, the characters are, well, types, and somewhat idealized types, but not poorly portrayed. It seems in the end just of the sort of book to have been popular in its time, and to have become completely out of fashion not long after.
Posted by Rich Horton at 7:47 PM