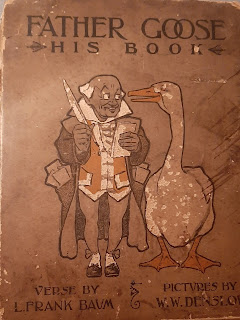 I found this book at an estate sale, and it looked intriguing. Turns out nice copies are very valuable. My copy isn't exactly nice, but it's in tolerable shape for a book from 1899. It was definitely a bestseller, a major one, I think. My copy was the third printing, 15000 copies, in November 1899. The first edition (September 1899) was 5700 copies, the second, in October, was 10,000 copies.

You all know Lyman Frank Baum, I trust. He was born in 1856 and died in 1919. His early adult life was financially rather a mess, with a series of not terribly successful ventures in poultry breeding, acting, and sales. He moved from New York to South Dakota (which became, more or less, the Kansas of The Wizard of Oz) then to Chicago. While in Chicago he published a children's book called Mother Goose in Prose (1897), illustrated by Maxwell Parrish(!), that was fairly successful. This led to the book at hand, Father Goose, which was the bestselling children's book of 1899. And in 1900 he published The Wizard of Oz, and we know where that went! (Though, despite its enormous success, Baum's financial incompetence, and his grandiose theatrical plans, led to later money problems.) W. W. Denslow, the illustrator of Father Goose, also illustrated (and shared copyright in) the first couple of Oz books, which led to a nasty breakup when they quarreled over credit.

Baum, anyway, eventually found his way to California. He wrote about 16 Oz books and several other fantasies. He was involved in multiple musical productions of Oz related work, and some plays, and early movies, often to his financial detriment. He also reputedly designed parts of the Hotel Del Coronado, on an island near San Diego. After his death, other authors, most notably Ruth Plumly Thompson, continued the Oz series.

(For what it's worth -- fairly little -- I worked with a guy name Francis Baum for a while a number of years ago. He seemed nonplussed by allusions to Oz.) 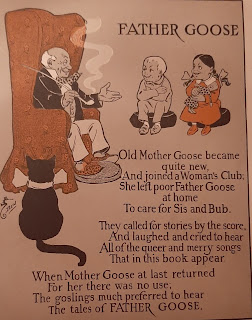 As for Father Goose: His Book? Well, what it purports to be is "modern" verses in the style of the Mother Goose rhymes. Is it successful? To my ears, not really. The poems seem mostly a bit labored, and the conceits not terribly interesting. Part of the problem is some horribly racist bits -- the piece about the n-word boy is all but impossible to read today, and the stories about Chinamen and the Irish aren't much better. But if we ascribe those to not exactly hostile, just insensitive, views of the time the book was written, still, the poems just aren't much fun. That's not entirely fair -- one in three, maybe, are kind of cute. But never, really, lasting. The Mother Goose rhymes endure -- and deservedly so. And these are forgotten -- deservedly so too, I'd say.

(But for all that, The Wizard of Oz is remembered, and absolutely deservedly so!) 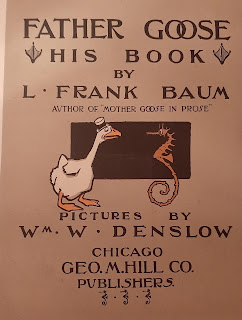 Finally, I must mention the pictures, by W. W. Denslow. And these really are quite nice. As noted above, the original Oz illustrations were also by Denslow, and they are very fine as well. Finally, I should mention that this book is hand-lettered, quite well, by Ralph Fletcher Seymour.