Birthday Review: The Privilege of the Sword (and short stories), by Ellen Kushner

Today is Ellen Kushner's birthday. In her honor, then, here's a review of her lovely novel The Privilege of the Sword, plus a few related short stories. 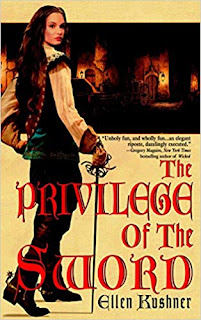 This is one of those books that I opened and started reading just to get its flavor, and it rudely shoved aside the other books I was planning to get to first. It is a delight throughout, supremely witty, romantic, adventurous. The setting is an unnamed country that resembles Regency England to some extent. The action occurs some 20 years following the classic Swordspoint, and a few decades prior to Ellen Kushner’s collaboration with her partner Delia Sherman, The Fall of the Kings. Like Swordspoint it is a “fantasy without magic”, though magic explicitly returns in The Fall of the Kings. Katherine Talbert is the 15 year old niece of Alec Campion, one of the heroes of Swordspoint, who is now the notorious Mad Duke Tremontaine. The Duke summons her to the city with the intention of making her a swordswoman. She had expected a more conventional future, but ends up taking very well to the sword, especially after instruction from the other hero of Swordspoint, the legendary Richard St. Vier, now living alone in the country. Katherine has many more experiences in the city, things like visiting a brothel, seeing a play, spying with the Duke’s protégé Marcus, and more conventional entertainments such as balls. She also becomes enmeshed, without the Duke’s knowledge, in a challenge against the Duke’s bitter enemy, Lord Ferris, a scheming politician and abuser of women, who has stained the honor of one of Katherine’s more typical female friends. Katherine is a delightful heroine, and the Mad Duke is a truly wonderful character. The dialogue is fast-paced and sharp. The minor characters are also excellent (my favorite is the Duke’s mathematician friend the Ugly Girl). The plot is effective, if a bit loose-limbed at times. Over all, I loved it – a thoroughgoing pleasure.

The first of the new bimonthly issuesof F&SF is April-May. Ellen Kushner offers a prequel to her novel Swordspoint: “’A Wild and Wicked Youth’” tells of Richard St. Vier growing up the son of a brilliant woman who never married his father, and so lives on the charity of a local Lord. Richard is friends with the nobleman’s son, but they have different interests – differences that are magnified when an encounter with a faded swordsman gives Richard the chance to learn his real talent … and magnified further, of course, when Crispin comes into his inheritance.

And finally I’ll give a brief nod to a new Ellen Kushner short story about Alec Campion (of Swordspoint and its sequels), "The Man With the Knives". It’s available as a chapbook from Temporary Culture, in a truly lovely package with Thomas Canty illustrations. The story is fine work, about a solitary woman, a healer, who takes in a desperate mourning man, a man with a collection of knives – knives that, it turns out, have healing uses. Worth reading on its own, or as a pendant to the wonderful books its related to, or simply to enjoy the lovely bookmaking behind the chapbook.

A different kind of Urban Fantasy is set in imaginary cities, and some of the best of this the past few decades has been Ellen Kushner’s Swordspoint and its sequels (one written with Delia Sherman). So it is a delight to see a very early look at Richard St. Vier and Alec Campion, from a different point of view, in “The Duke of Riverside”, which is a Riverside dweller’s view of Alec’s arrival, on the point of despair, in that dangerous part of town.