Today is Charles Stross's birthday. I plan to put together a look at his short fiction later, but for the morning, how about this review of one of his early novels. 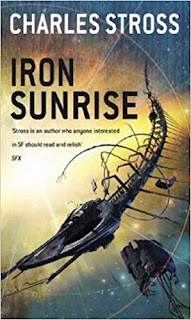 Iron Sunrise is a sequel to Charles Stross's 2003 novel Singularity Sky. Sequel isn't a precise term here -- Singularity Sky resolved its story quite well, and this novel is set in the same universe and features the two main characters of the previous novel in important roles, but the main conflict is completely new. Stross wrote one other novelette in this universe ("Bear Trap"), and he now declares himself finished. It's an interesting setup, and could certainly profitably be mined for further stories, but he seems to feel it has become a bit shopworn, and a bit outdated. Anyway, he has a fecund imagination, and his other ongoing work (The Atrocity Archives, Accelerando, The Family Trade) certainly shows that he will not lack for interesting settings.

I was tempted, when I first wrote this, to defer entirely to Charles Oberndorf's review in a recent New York Review of Science Fiction. Oberndorf, it seemed to me, captured the strengths and weaknesses of the book very well. So I recommend you read it if you can -- but I'll do something quick here as well.

The story opens as "a nondescript McWorld named Moscow" is dying -- its sun having been detonated by some enemy. They immediately blame a rival world, New Dresden, and automatic defenses launch a reprisal. But is New Dresden really to blame? And even if they are, is there any point to destroying yet another system?

One of the refugees fleeing the effects of the Moscow disaster is a teenager named Victoria Strowger, who calls herself Wednesday. Guided by her imaginary friend, she tracks down a mysterious piece of information on her home station before leaving. Her friend is named Herman -- which reveals to any reader of Singularity Sky that "he" is in fact an agent of the Eschaton, a post-singularity intelligence which aims to protect its existence by severely prohibiting certain atrocities and especially causality violations. Even in her new home, Wednesday realizes that she is a target -- for reasons she doesn't really understand. So she escapes on a ship heading to -- New Dresden.

A variety of other people are also involved. The coming attack on New Dresden is something the UN wishes to prevent, and the agent assigned to the problem is Rachel Mansour, heroine of Singularity Sky. She and her husband Martin Springfield end up on the same ship with Wednesday. So does a veteran political blogger named Frank. And so too are representatives of a vile group of Nazis-in-Space(tm). It appears this last group may have something to do with the problems at both Moscow and New Dresden. They are determined enemies of the Eschaton. And they have a special interest in Wednesday, and whatever she may have learned ...

It's a fast moving and fun story, with plenty of pretty neat ideas. It's a bit more smoothly written than Singularity Sky. It resolves intelligently and fairly satisfyingly -- perhaps there is just a hint of the over-convenient about the conclusion. Oberndorf's review also points out, quite sensibly, that Stross's imagination, so fecund at times, fails him at other times. One way is that all his worlds seem pretty bland (though this is actually explained by the terraforming action of the Eschaton). Another problem is the way Wednesday is portrayed -- as a pretty typical disaffected 90s goth girl, to a first approximation. In sum -- a good book, one of the better SF novels of the year, but no more than good.
Posted by Rich Horton at 5:16 AM