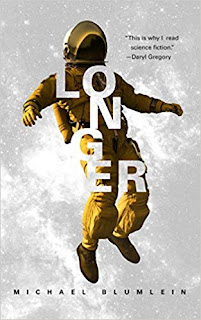 Rudy Rucker has reported that Michael Blumlein has died, aged 71. I didn't know Blumlein, though I reprinted his exceptional 2012 story "Twenty-Two and You" in The Year's Best Science Fiction and Fantasy: 2013 Edition. But I have been intrigued by his work since discovering his 1986 story, "The Brains of Rats". (We reprinted "The Brains of Rats" at Lightspeed here.) So I will memorialize him in the way I have: by remembering his stories, via things I've written about them, for Locus and for my pre-Locus SFF Net newsgroup.

Also, he has a new novel, or long novella, out this year from Tor.com. It's called Longer, and I missed it earlier but will get it it now.

"Fidelity: a Primer" (September) just struck me as charming and somehow "true".  I really liked it.  I think as things stand now it's my favorite novelette of the year,

And the following, from a discussion about the definition of SF:
[Gordon van Gelder here brings up "Fidelity: a Primer", a Michael Blumlein F&SF story from 2000, one of my favorite stories of that year. The story is at best only barely SF (I thought is was, but I agree that you could read it differently). But, Gordon suggests, it is important to the success of the story that the reader suspect that it might turn out to be SF. I.e., the venue affects reader expectations, and thus affects the typical reading of the story, possibly in important ways. Interesting, though I admit to being made uneasy by the implication that "Fidelity: a Primer" would be a lesser story if published in the New Yorker.]

And Michael Blumlein's "Know How, Can Do" (F&SF, December) combines some clever wordplay -- clever but also thematically meaningful -- with a quite original story about a real scientific idea with real consequences, and real, if decidedly odd, characters facing loss.

The cover story for F&SF in July is a novella from the always interesting Michael Blumlein. “The Roberts” concerns a brilliant architect whose workaholic ways lay waste to his love life. He hits upon a creepy solution – designing his own lover – but this too has pitfalls. It’s a nice story, but a bit too obvious in its working out, and it lacks the shocking originality that characterizes Blumlein’s best work.

My favorite story was Michael Blumlein's "The Big One" (#6), only barely fantastical, indeed almost Carveresque at times, about four men who knew each other in high school fishing much later in life, with lots of, well, life issues impending.

Also first-rate is “Twenty-Two and You”, by Michael Blumlein (F&SF, March-April), which quite plausibly addresses the idea of genetic fixes for inherited diseases. Here a young couple wants to have children, but family history suggests that pregnancy might be very risky for the wife. So she has her genome sequenced, and learns the bad news. But it is possible in this near future to change your genome … but the genome is a complicated thing. This is a nice example of a story with no villains, indeed no fools, but still sadness. An excellent piece of pure science fiction in the sense that it closely examines the effects of scientific change on real people.

Just one magazine to cover this month, the last F&SF of 2013. The longest story is “Success”, by Michael Blumlein, one of our most interesting and original writers. Alas, this story, about a brilliant scientist who goes, it seems mad, never really came to life for me. Dr. Jim, the central character, is cured, after a fashion, and marries again, a long-suffering woman, also an academic. He is working on his life's work, a book about the gene, the epigene, and the paragene, while she is pursuing tenure in a more ordinary fashion. Dr. Jim also battles something, or someone, mysterious in the basement, and becomes obsessed with building something in the backyard, to his wife's eventual disgust … leading to a reversal of fortunes, perhaps … Blumlein is never uninteresting, but as I aid, here he doesn't really – forgive me – succeed.