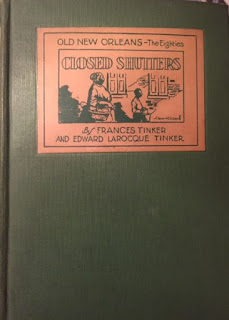 Edward Larocque Tinker (1881-1968) was the grandson of a prominent New York lawyer, and became a lawyer himself, and eventually a District Attorney. He developed an interest in Latin America, beginning probably with a visit to Mexico during the Mexican Revolution, at which time he he met Pancho Villa. He wrote a variety of books, much nonfiction, for example books about Lafcadio Hearn, about the man who introduced craps to New Orleans, and about artist Joseph Pennell. He also wrote some novels, including Toucoutou, about a mixed-race man. He seems to have been mildly well-known during his life, and as close to completely forgotten now as one can get.

Frances (McKee) Tinker was his second wife. She collaborated with him on a series of novelettes for the Century Magazine about New Orleans in the last four decades of the 19th century. It's not clear to me if these were her only works of fiction. Edward published a later novel about pre-Civil War New Orleans in 1953. I don't know if Frances herself was from New Orleans, or if their mutual interest in the city derived from some other source -- perhaps Lafcadio Hearn. At any rate, these four stories were published in book form as slim octavo volumes in 1931. The stories were collectively called Old New Orleans, with the 1860s represented by Widows Only, the '70s by Strife, the '80s by Closed Shutters, and the '90s by Mardi Gras Masks. It seems natural that they might have been published in a single volume, but I don't know if that ever happened. And, of course, it's highly unlikely that the books were bestsellers. 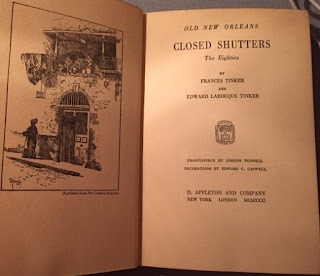 My copy of Closed Shutters was published by D. Appleton and Company. I seem to have the first editon. The frontispiece is by Joseph Pennell (about whom Tinker published a book), and "decorations", appearing on the cover and the endpapers, by Edward C. Caswell. I found my copy at the well-respected used book store Jane Addams Books in Champaign, IL. Closed Shutters is about 13,000 words long.

It's a very simple story. It opens with a "thin-faced child", a young girl, watching in envy the play of a set of girls at a birthday party. This "thin-faced child" is Alys Ledoux, described as a "Creole", though I'd have said "Cajun" (as she is white, and I thought the "Creoles" were black or mixed-race, but that is apparently not quite right.) Alys lives around the corner, with her ailing mother and an older sister, who take in sewing work to make ends meet. Alys encounters Emma, the black housekeeper of the owner of this house (who is a well-loved and apparently saintly judge.) Emma, who makes it her duty to help the local poor, realizes immediately that Alys and her sister and mother are essentially indigent, and gives her some food in a valuable blue "tureem".

At first it seems the story will be about Alys, but really it's about Emma, who is portrayed as a wonderful and generous woman, and a dutiful servant to the Judge. She keeps giving food to Alys, and then to Alys' older sister, but a particularly harsh winter intervenes. We see Emma's interactions with a boy who is supposed to be helping her, and with the Judge. And at the end we see death -- the Judge, old beyond his years, finally fails in health. And when Emma finally makes her way to the Ledoux house, she realizes that Alys' mother and sister have both died during the cruel winter, and Alys too is on death's door. Add to that the economic stress on both Emma and the Judge's wife, when the true state of his finances is revealed after his death.

The story is really very depressing, though told in a lightish tone. For a contemporary reader the treatment of Emma, the center of the story, is undeniably racist, though she is regarded by the authors as a virtuous and admirable character, with a slight weakness for mild gambling, and, to be sure, for good food. But she is treated as a child, and the attitudes of the Judge and the authors are undeniably that "benevolent paternalism" that seemed central to "liberal" whites of that time. The story itself it reasonably well-executed, if just a bit too limited in scope. As it happens, I was reading P. Djeli Clark's The Black God's Drums at exactly the same time -- another story set in New Orleans a couple of decades after the Civil War (albeit in an alternate timeline), and the contrast in the agency and independence of the black central characters of the two stories is hard to miss.
Posted by Rich Horton at 6:42 PM