Mary Flannery O'Connor would have been 94 today. Alas, she died, not yet 40, in 1964, of complications of lupus, the same disease that killed her father. She was a truly remarkable and original writer, of a couple of dozen short stories and two novels. In her memory, then, here is what I wrote for my blog some long while back about her two novels. 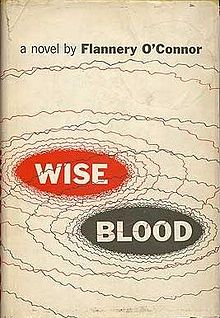 I'm not really a big fan of Southern fiction in general, though I make exceptions. "Southern Gothic", in particular, always seemed a mode that I wouldn't necessarily find congenial. (This whole prejudice of mine may be no more that a prejudice, formed from equal parts overreaction to William Faulkner's reputation as presented to me in high school (I hope I have got over that sentiment since then), disdain for Confederate apologists (which, mind you, doesn't necessarily describe any of the writers I might have considered), and dislike for occasional perhaps nontypical examples such as Fanny Flagg's Fried Green Tomatoes. I should note that I think John Kennedy Toole's A Confederacy of Dunces utterly brilliant, and Walker Percy's The Moviegoer pretty darn good. But I had formed the idea that if I was going to try such a writer, it ought to be Flannery O'Connor. (Perhaps because she was Catholic -- and though my Catholicism is rather lapsed, I do often find Catholic writers sympathetic. Note that Percy and Toole were Catholic.)

So, I read O'Connor's first novel, a rather short book called Wise Blood. It is quite thoroughly strange, full of basically unattractive characters, acting in obsessive ways, coming to bad ends. Yet it's a remarkable, rather moving, strikingly written book that really sticks in the mind.

Hazel Motes is a young man from rural Tennessee who has just got out of the Army. (The book, published in 1952, appears to be set immediately after the Second World War.) He's had no contact with his family, what's left of it, for 4 years, and when he comes home he finds his home abandoned and in decay, and everyone dead. We meet him on the train to the "city", I assume a fictional place somewhere south of Tennessee. (And a reasonably small town for all that.) He's an unpleasant man, baiting the black porter, pushing his lack of belief in Christ on all and sundry.

In the city, he wanders somewhat aimlessly, encountering first a prostitute, then a blind preacher, Asa Hawks, and his "daughter" Sabbath, then another confused young man named Enoch Emery. Hazel (whose grandfather was a circuit-riding preacher) sets up as a preacher himself, preaching the "Church Without Christ", and advocating blasphemy and sin. He pursues and is pursued by Sabbath Hawks, and also Enoch Emery. Motes is continually unpleasant to all around him. After Hazel rebuffs a confidence man's attempt to cash in on his preaching, he finds himself confronted by a "twin", Solace Layfield, the false prophet, who preaches of "the Church of Christ Without Christ", and who wholly perverts Hazel's nihilistic "message". Meanwhile the pathetic Enoch is trying to steal a "new Jesus" for Hazel, while Sabbath, barely a teen, is successfully seducing Hazel. The end is grotesque and strange -- Hazel becomes a murderer, Enoch a thief, Sabbath is sent to a home, Asa runs off -- and the final two chapters show Hazel mortifying himself, apparently searching for redemption. Whether his redemption is real seems an open question to me, though O'Connor seemed to think it was.

The novel is ostensibly a comedy, and I suppose it is, but a very black comedy. It's full of images and objects and actions heavily weighted with symbolism -- Hazel's decrepit Essex automobile, the gorilla suit Enoch steals, the mummy that is to be the "new Jesus", the blind preacher's eyes, and Hazel's, and much more. The writing, as I said, is striking, with any number of quite memorable phrases, such as the woman whose hair looked like "ham gravy dripping down her head" -- descriptive, and accurate, and very Southern in feel to me. This is a strange and quite compelling novel.

The Violent Bear it Away 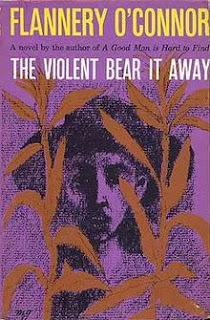 I liked Flannery O'Connor's Wise Blood, which I mentioned here a month or two ago.  I read her only other novel, The Violent Bear it Away, just this past week. It is also striking, involving, oddly comic, ultimately dark if arguably suggesting redemption for its mad, violent, main character. It's really a lot like Wise Blood in a number of ways. Both books feature a young man (actually a teenaged boy in this case) who has been raised by a fiercely Protestant old man who is some variety of preacher/prophet. Both main characters try to reject the influence of this father figure, but ultimately are forced, under gothically violent circumstances, to take on the mantle of their "father"'s religion  Both books feature rather shocking murders at the climax: murders that in the final analysis lead the murderer to accept Christ (it would seem, though other readings are certainly possible). It's odd (as O'Connor herself noted) that a Catholic writer would deal so obsessively with Protestants, and with a gothic and almost hysterical flavour of Protestantism.


The Violent Bear it Away opens with the death of Francis Marion Tarwater's great uncle. Tarwater (as he is called) was basically kidnapped by this strange old man shortly after his birth: at his birth his mother and her mother (the old man's sister) both died, and the boy was left in the care of the old man's nephew, Rayber. Rayber had also been "kidnapped" by the old man but was brought back to his mother. In both cases, the old man, who fancies himself a "prophet", aimed to baptize the boy he kidnapped and raise him to succeed him as a prophet. Rayber has rejected his uncle's teachings and become a radical secular materialist. Tarwater struggles to reject both his uncle's and his great uncle's teachings, and the book is basically about his struggles.

The opening chapters comically and grotesquely describe the old man's death and Tarwater's failed attempts to bury him, as well as setting up the strange family situation in flashbacks. Then Tarwater heads to the city, where Rayber lives with his idiot son, a boy a few years younger than Tarwater who is severely brain-damaged. It was the great uncle's desire that this idiot boy be baptized by Tarwater, and it is his father (Rayber's) desperate desire that Tarwater not baptize him and instead reject religion and start attending school and become "normal". But all this comes to naught in a harsh, strange, end, with a murder followed by a rape, followed by a somehow "cleansed" (perhaps) Tarwater heading back to the city to take up his duties, whatever they may be.

This is all told in a very striking voice, reminding me somehow of an American take on the language of the King James Version. (The title quote, by the way, is from Matthew 11:12, but naturally enough for a Catholic of O'Connor's time, the translation she used is the Douay.) The language, the diction, also reminded me somehow of Irish writers, particularly perhaps Flann O'Brien. It's a remarkable strange book, very readable, if a bit difficult to come fully to grips with.
Posted by Rich Horton at 4:38 PM