Birthday Review: Letters from the Flesh, by Marcos Donnelly

Marcos Donnelly turns 57 today. He published a few stories in the 1990s in places like Full Spectrum, Amazing, and F&SF, and a novel with Baen, Prophets for the End of Time. Then this novel in 2004, and nothing I've seen since, though I think there's been at least one further novel, perhaps from a non-traditional publishing venue. I liked this book, and I'm glad to resurrect this review that first appeared in Locus, for Donnelly's birthday. 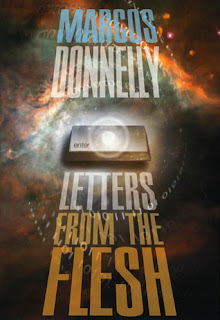 Here is a rather unexpected delight, a new short novel from a Canadian small press (run by SF writer Robert J. Sawyer), told in a series of letters and e-mails. It tells two parallel stories. In one thread, an alien energy creature is revealed to have struck Saul of Tarsus blind on the road to Damascus, and to have taken over his consciousness. The new composite creature composes “letters” – dare we say “epistles”? – to his fellow energy creatures. In the other thread, Lillian Uberland, a young genetics researcher, sends long e-mails to her beloved cousin Michael, a science teacher.

The letters from “Paul” reveal the history of the energy creatures – very long-lived beings formed at the Big Bang, who have only recently (in comparative terms) encountered a deadly Enemy. Ten of these “Asarkos” (for “no-bodied) have recently gone missing, and our protagonist is looking for them when he stumbles across the unimaginable – a planet containing living intelligent begins made of matter! By accident this Asarkos takes over Saul’s brain, and when he comes to, blind and confused, he is introduced to the sect Saul was persecuting, the followers of Jesus Christ. The rest of his letters retell much of the Acts of the Apostles, as the new “Paul” becomes a Christian. He is able to use his powers to raise a dead woman, and in so doing he begins to realize what has been going on in first century Palestine, with Jesus, his disciples, the women around them, and such miracle as the speaking in tongues at Pentecost. The explanation is pretty effective, very science fictional yet oddly and almost ecstatically religious (or at least mystical) as well. The promise of Heaven, let us just say, remains. All is told very nicely, with many familiar Pauline phrases seamlessly woven in, and with the composite creature “Paul” (who is still “Saul of Tarsus” in a sense, especially after he regains some of Sault’s memories) very well portrayed.

Lillian’s e-mails to Michael chart, from her side, a growing controversy in Michael’s science class. It seems that several of his students of are members of the same fundamentalist church, and Michaels teaching of evolution threatens to get him in trouble. Lillian tries to bolster his position with fierce arguments against proponents of Intelligent Design, but to her horror she is drawn directly into the controversy. Michael tries to appease the Creationists with a school-wide seminar in which Lillian will represent the evolution side, debating a visiting Creation Science “scholar”. Considerable complications ensue when violence erupts at the seminar, and all is made worse by Michael’s involvement with one of the students and her mother, and by a secret Michael and Lillian share.

The two threads are joined at the end in a way that successfully caps the story of the Asarkos, and the way in which they and humans can benefit each other. I will say, though, that the way this brings the story of Lillian and Michael to completion comes off rather pat. Their personal story is at once too convoluted in setup and too convenient in resolution. Even with that weakness, I really enjoyed the novel. Its SFnal “explanation” for Christianity is intriguing and thought-provoking – by which I don’t mean to suggest anyone is expected to believe in it, simply that it’s fun to read about and at the same time it promotes worthwhile reflection about philosophical and religious matters.