Today is Mary Gentle's birthday, and in her honor I've resurrected this review I did of Ash back when it first came out. I will mention that I reviewed the first two volumes of the American mass market paperback edition for SF Site, and that review is here: A Secret History/Carthage Ascendant. 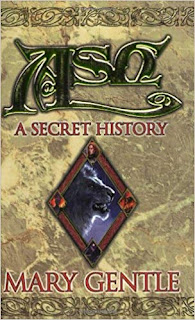 I finished Mary Gentle's massive novel Ash.  (I estimate it's about 590,000 words).  I bought the English trade paperback, too impatient to wait until December or whenever the last volume of the four American mass market paperbacks is to come out.  This is a very impressive novel indeed.  I've mentioned the first two volumes before, which seemed at first like fantasy, set in an alternate past.  In the end, though, Gentle gives a rationale for her setup which to my mind makes the book Science Fiction, though it will doubtless become another borderline case for those who worry overmuch about definitions. (Like me!)

Ash is a 20 year old female mercenary captain in Europe in about 1476. As the book goes on, we realize her Europe is oddly different from ours: the dominant religion is an altered Christianity (with Mithraic elements, and reference to the "Green Christ", etc.).  Carthage is a significant power, and more intriguingly, the area around Carthage never sees sunlight.  Ash also has strange powers: she hears a voice in her head which gives her tactical advice: this has been a great aid in her career.  Much of the book is concerned with the details of military action and general military life in this time period, and this is all described with gusto, and realism.

The plot is fairly involved, and significant spoilers would be hard to avoid. So, just to sketch things: Ash's company becomes involved in the defense of Burgundy against an invasion from Carthage.  As Carthage invades, the area without sunlight expands.  It seems they must be stopped lest all of Europe become Dark.  But Carthage is aided by strange devices, basically robots made of stone, and they are led by a woman who might be Ash's twin. Ash is captured and taken to Carthage, but her company comes to rescue her.  While in Carthage, Ash learns the secret behind her twin, the voice in her head, the source of Carthage's powers, and the mysterious "Wild Machines" outside Carthage.  After her rescue, she returns to Burgundy, which is mysteriously vital in the defense against the darkness.  The last half or so of the novel describes a nearly hopeless siege, with Ash and her company and the remnants of Burgundy's army penned inside Dijon.  The only hope may be to learn what the "Wild Machines" really want.

This summary misses much of Ash's personal life: her marriage to a charismatic nobleman whom she lusts after but can't stand in person.  Her surgeon, a woman masquerading as a man, who turns out to be related to the royal family of Burgundy, with significant plot effects.  Her priest, who stays with her even after death.

There is also a frame story, involving a modern archaeological effort in Tunisia, which mysteriously begins to uncover hints of the Carthage of Ash's story, as well as the a new translation of manuscripts about Ash's life, which suddenly reveal details of Ash's strange history which had never been suspected.  The modern day investigators, archaeologist Isabel Napier-Grant, translator Pierce Radcliffe, and his editor Anne Longmans, start to feel that the very structure of reality is in flux.  Gentle manages to make all this pull together, to make it all work, and to give it all a fairly rational and thematically meaningful explanation.  It's very satisfying, definitely one of the best books of the year.  (Though there is a vaguely cute postscript to the story that didn't quite work for me.)
Posted by Rich Horton at 5:08 AM