Today would have been H. Beam Piper's 115th birthday. Of course, as is well known, he committed suicide, 60 years old, in 1964. He was out of money -- in bitter irony,  several checks were in his agent's hands at the time. That said, he had also gone through a bitter divorce, and some say he killed himself either to spite his ex-wife (and reduce any life insurance she might receive), or because of depression due to his family problems.

His first novels were the two serials discussed below, published in books form as Crisis in 2140 and Uller Uprising. (A version of "Uller Uprising" had actually appeared as part of the Twayne Triplet The Petrified Planet a year earlier.) In addition to those novels, I append a short look at perhaps his most famous story, "Omnilingual".

The two part serial, "Null-ABC", by H. Beam Piper and John J. McGuire, is about 36,000 words long. It was later published -- possibly expanded -- as a novel called Crisis in 2140. It reminded me of nothing so much as a much later collaborative novel that was serialized in Astounding's successor, Analog: "Higher Education", by Charles Sheffield and Jerry Pournelle. The similarities are in the view of contemporary education, not in any plot resemblance.

In "Null-ABC" people have become suspicious of scientific inquiry, and even of literacy. A small group of Literates have become a closed guild. Chester Pelton is a department store owner who is running for Senator on the platform of "socialized literacy" -- he wants the Literates to be forced to become servants of the government, supplying their services to all for free. It seems he is likely to win. But what he doesn't know is that both of his children -- a teenaged boy and a young woman -- are closet literates. They have been taught in secret by the local schoolmaster, who is also the woman's lover. Pelton also doesn't know that much of his support comes from a faction of Literates who believe that if he wins they will eventually take over the government. The good guys among this faction want to push for a return to universal literacy. The bad guys just want power. And the other bad guys want to retain the status quo.

The whole thing is a bit (realistically) confusing. Anyway, the main plot revolves around a couple of sometimes conflicting schemes -- one, to discredit Pelton by revealing that his daughter can read, and two, to frustrate Pelton by fomenting a riot in his department store. So, most of the action is focussed on the (rather silly, in many ways) battle for the store. It's kind of a silly story overall, though I was caught up in it -- it's at least a decent read.

Now I will treat "Ullr Uprising", and its slightly convoluted publishing history, in some detail. 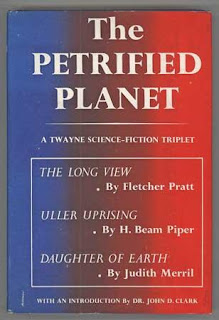 In the early 50s a company called Twayne planned several volumes of short novels linked in a curious way. A scientist would write a precis of the background -- designing the planets and alien races, for example. Then three different writers would create short novels based on the background. (Not, however, set in truly "shared" worlds, such as Harlan Ellison's Medea anthology -- the backgrounds would be similar, but the stories would not share a common history.) These would be called Twayne Triplets. Several such volumes were planned -- stories written for Twayne Triplets include "A Case of Conscience" and "Get Out of My Sky" by James Blish, "Second Landing" by Murray Leinster, "Question and Answer" by Poul Anderson, and "First Cycle" by H. Beam Piper (later completed by Michael Kurland). The only Science Fiction Twayne Triplet to actually see publication was The Petrified Planet (1952), which included "The Long View" by Fletcher Pratt, "Daughter of Earth", and "Uller Uprising", by Piper. The scientific precis was by Dr. John Clark. (A Fantasy Twayne Triplet was also published in 1952, though it did not seem to be created in quite the same fashion.)

Quite a few years ago I read the Ace reprint of Piper's Uller Uprising, a full-length novel at roughly 55,000 words. (As far as I know this version is what was published in The Petrified Planet, though it's possible the Twayne Triplet version was also shorter than the eventual novel.) It turns out that Piper also sold a cut version of this story. It was published with a very slightly cut title, as "Ullr Uprising", a two-part serial in Lester Del Rey's magazine Space Science Fiction, in 1953. (Somewhat annoyingly, Del Rey did not choose to mention the previous publication of a longer version of the story. But Del Rey was prone to slightly annoying editorial habits with Space -- he routinely published his own novellas, sometimes under his own name, but also sometimes under a pseudonym, Philip St. John.) As I didn't remember the Piper story well, I decided to reread it in the serialized form when I got copies of the appropriate issues of Space.

"Ullr Uprising" is set on a planet inhabited by six-limbed dinosaur-like folks. Humans have colonized this planet, and they employ the natives as laborers, as farmers on Ullr, and as miners on another (uninhabitable) world in the same system. But the natives are restless, under the influence of a rabble-rousing religious figure. As the novel opens, open rebellion breaks out in a number of the local city-states. Our hero, General Von Schlichten, must coordinate the suppression of the rebellion, with the assistance of one loyal group of "good aliens", who are properly grateful for Terran assistance, as well as a fence-sitting city-state or two. He also must deal with the meddlesome but pretty representative of a human pro-native rights organization -- but she gets convinced mighty quick of the rightness of the Terran hegemony, and soon enough she is a) calling the bad natives "geeks", b) serving as a Colonel in the army (and as adjutant to General Von Schlichten), and c) hopping in bed with the General. (Well, OK, they only kiss in this book, written in 1952, but you can bet they'd have hopped in bed if Piper had written the book a few decades later.) Finally, the General must deal with the threat of one of the city-states gaining nuclear technology.

What the story is, clearly enough, is a retelling of the Sepoy Mutiny. And I must say I found much of it distasteful, with the deck-stacking portrayal of the "good aliens" vs. the "bad aliens", and with the cheerful use of terms like "geek" by the "good guys". (It's OK, see, because the bad aliens call humans "suddabits", which is apparently the best their vocal equipment can do with "son of a bitch".) Piper does, to be sure, tell a rapid and fairly exciting story. And the aliens have some interesting aspects -- particularly, they are hermaphroditic, but Piper only glancingly treats the effect this might have on their social organization. It may be, however, that the longer version (which I have not reread) gives more detail about such aspects.

An interesting (to me) side note -- three minor characters have names later used by SF writers for major series characters. Two are names used by Keith Laumer: Retief and O'Leary. I suspect in this case the correspondence of names is just coincidence (Retief in "Ullr Uprising" is a Lieutenant or something who gets a one line mention. O'Leary is more important, but after all O'Leary is a fairly common name.) The third name is Falkenberg -- a minor but not totally insignificant character in "Ullr Uprising" is named Major Falkenberg. Given that Pournelle was known to be a Piper admirer, I do wonder if he didn't consciously reuse the name for his famous mercenary leader, John Christian Falkenberg.

The Feb '57 Astounding has a very famous story, H. Beam Piper's "Omnilingual".  I hadn't reread this story in ages -- it holds up pretty well.  Notable for its deadpan portrayal of a woman scientist as protagonist -- though the language rather undermines things by calling all the women except the lead character "girls" even though they are apparently fully equal to the men in the expedition in ability and responsibility.  For those who don't know, it's about the archaeological investigation of Martian ruins, and the search for a key to translate Martian texts, lacking a "bilingual" such as the Rosetta Stone.  I'm not really convinced that the answer Piper gives (I'm sure everybody's read the story, but I'll leave it for the SPOILER SECTION anyway) would actually work that well, but the principle is still nicely illustrative.

The "Rosetta Stone" in "Omnilingual" is of course a Periodic Table, though really, more generally, the "omnilingual" (as opposed to "bilingual" -- and the word "omnilingual" appears only in the title) is scientific knowledge in general.  I think there's a chance the general idea would work -- just not so fast as displayed in the story, but I suppose we can accept that as dramatic compression.]
Posted by Rich Horton at 5:37 PM