Theodore R. Cogswell was born March 10, 1918, so he'd have been 101 years old today. (His hometown, Coatesville, PA, was also the home of the great writer W. M. Spackman, who was 13 years older than Cogswell.) Cogswell died in 1987. He was primarily an academic, at Ball State in the 1950s, and by the end an English teacher at a junior college. (Algis Budrys claimed he "couldn't be bothered to publish, and couldn't be bothered to get his Ph.D", which hampered his career.) He wrote some 40 SF stories between 1952 and 1981 (though the largest part by far appeared through 1962), plus one novel, a Star Trek tie-in, Spock, Messiah!, written with Charles Spano. He is still by far best remembered for one story, his first, "The Specter General", from Astounding for June 1952, and later reprinted in the Science Fiction Hall of Fame Volume IIB. One more story is even better, I think -- "The Wall Around the World", from Beyond in 1953. 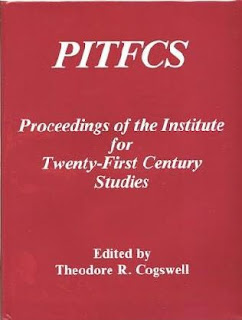 His writing career, then, never really took off, though as noted he did publish at least a couple really lasting stories, which is more than a lot of folks have done. But he did something else of real significance for the SF field. This was his editing of the "fanzine for pros" called Proceedings of the Institute for Twenty-First Century Studies, usually abbreviated PITFCS. This ran for 17 issues between 1958 and 1962, with one last issue published in 1979 but mainly printing stuff left over from 1962. He prepared this book, a collection of most of the material from PITFCS, in 1985, but Advent didn't publish it until 1993 (though it is dated 1992.) It was nominated for the Hugo Award for Best Non-Fiction Book.

As I said, this book is primarily the contents of PITFCS, though it includes one issue of another Cogswell fanzine, Digit, comprising mostly humorous poems by a number of SF writers riffing on the ambiguous pronunciations of names like Leiber, Boucher, and Poul (Anderson). Not all of PITFCS is included -- the Science Fiction Encyclopedia suggests that what is missing is discussion of a "particularly ugly controversy involving Walter M. Miller". (I have no idea what that controversy was -- I wouldn't be human if I wasn't curious about it, but I assume it was not included in the book for good and proper reasons.)

The book is huge -- 375 close packed 8 1/2 by 11 pages. (Something in me wishes the format was 7 by 10 in homage to the pulps!) Each issue after the first consists of a short editorial note and a series of letters from the subscribers (often, of course, in response to material from the previous issue.) The list of contributors is huge -- prominent names from within the field include Judith Merril, Isaac Asimov, James Blish, Algis Budrys, Rosel George Brown, Harlan Ellison, Randall Garrett, Kate Wilhelm, Avram Davidson, Damon Knight, Miriam Allen de Ford, Lloyd Biggle, Donald A. Wollheim, Sam Youd ("John Christopher"), John Brunner, Fritz Leiber, Poul Anderson, etc. etc. There were several contributors known primarily for work outside the genre: Richard McKenna, Kurt Vonnegut, John Ciardi, Michael Frayn, and Kingsley Amis most obviously.

What was discussed? Some shop talk, for sure -- there was an exchange about the value of editors, some happy to do rewrites on request, others against it. There was discussion about controversial works of the time, notably for example Starship Troopers -- and, indeed, James Blish vowed to right a response to it in novel form. (This became Mission to the Heart Stars, one of Blish's worst books.) There was a fascinating exchange about Budrys' Rogue Moon, and how he cut it for the magazine publication, and possible alternate titles. There were political discussions -- for example, a bit about Chan Davis' encounter with McCarthyism (which is why his career as a Math professor took him to Canada.) There were versions of the age-old debate "Is Science Fiction Literature?" There were discussion of John W. Cambpell's enthusiasms, such as the Dean Drive. Perhaps most significant, there was extended discussion of the possibility of forming an SF Writers' Union -- discussions that were critical in leading eventual to the formation of the Science Fiction Writers of America. And of course there was gossip.

I'm not sure how wide the true audience for this book is -- I know I'm not the usual case. But I absolutely loved it. It's probably my favorite book "about" Science Fiction, and the Science Fiction community, of all time. And it's still available, from Advent Publishers (via NESFA.) So -- if you are part of the SF community, if gossip and elevated gossip about issues dating back 50 years is of interest to you, this is a wonderfully fun book to have. That said, these issues hanker back to ancient times, sort of, and for many people likely this won't mean much of anything, which is fine too, of course.
Posted by Rich Horton at 5:49 PM