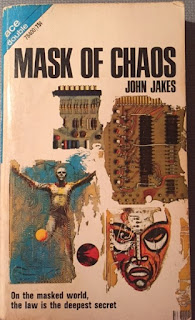 Mask of Chaos is about 55,000 words. The Star Virus is about 50,000 words. The total length of over 100,000 words is quite large for an Ace Double. Jakes published a few Ace Doubles. Bayley published one more, Annihilation Factor in 1972 (backed with Neal Barrett, Jr.'s Highwood). Both of Bayley's Ace Double halves were expansions of stories from 1964 issues of New Worlds.

I do really like these two covers. The one for Mask of Chaos is by Jack Gaughan, and the one for The Star Virus is by Kelly Freas -- likely the two leading SF illustrators in that time period. 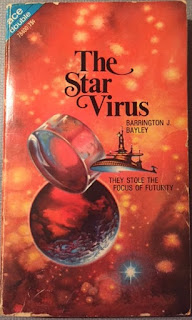 Barrington Bayley (1937-2008) was one of SF's "wild men", and stayed that way until the end of his life. He's clearly in the same ballpark, concept-wise, as Charles Harness, though his general outlook is more cynical. I'd recommend almost any of his novels as worth reading for the ideas alone. The Star Virus was his first novel, and it is expanded from a story also called "The Star Virus", from the May-June 1964 New Worlds.

It's the story of a star pirate, Rodrone, who stumbles across a mysterious alien artifact, called the Lens. In this future, the only true star-travelling races are humans and the Streall. The Streall are technologically advanced, but very rigid. Humans are completely disorganized. The Streall hate humans, but for some time apparently a quasi-equilibrium state has been maintained.

The Lens was the property of the Streall, but humans had found it. Rodrone steals it from a ship returning it to the Streall, and the novel recounts both the Streall pursuit of Rodrone, and Rodrone's attempts to understand the Lens. The plot is a bit rambling, and lots of the science is totally absurd, sometimes unnecessarily so. In this, as in other things, Bayley resembles Harness. But the central notion of the novel, the true nature of the Lens, is at once wacky, original, powerful, and in the end just plain cool enough to pretty much justify some of the carelessness of the rest of the book. (I'm not saying a rewrite with a strict editor might not do this book a world of good though!)

I may be wrong, but it seems to me that Bayley here, in engaging in really far out, pseudo-scientific speculations, is doing something that SF writers used to do a lot, but don't so much anymore. I think nowadays there is more emphasis on getting the science just right, or alternately on using well-established furniture which may not be scientifically plausible, but is legitimized by tradition. I don't have a problem with stories which of those types: but I think we need to make room for the wild men, who use SF as a tool for what can be really nice philosophical mind-stretching, even if in so doing they utterly abandon plausibility.

John Jakes was born in 1932 in Chicago, and he began contributing to the SF pulps in 1950. He was a regular contributor to the SF magazines in the 1950s and 1960s, and published a great deal of SF, historical fiction, and westerns in that period. He was perhaps best known in the field for his 1973 novel On Wheels, about a car-based future, and for his Conan-derived fantasy series about Brak the Barbarian, which began with stories and serials often in Cele Goldsmith's Fantastic. (I've just finished one of those serials, "When the Idols Walked".) I was never overly impressed with his SF or Fantasy -- the Brak stories, for instance, are frankly "thud and blunder", and the other short fiction I've read strikes me as competent and unambitious yard goods. But in the mid-70s, Jakes produced a bestselling series of paperbacks, The Kent Family Chronicles, set in the Revolutionary War period, and timed to appear coinciding with the Bicentennial celebration. These made his name, and he continued to write mostly historical fiction (including the North and South series, about the Civil War) after that.

Mask of Chaos is a sometimes promising, ultimately disappointing novel. It's the story of a mechanically-enhanced spaceman called Mike, short for the insulting nickname Micropig. He sold himself to a research institute allowing them to experiment with replacing much of his body with mechanical parts. In the process he seems to have forgotten his past, and to have been psychologically altered to be unrealistically accepting of whatever goes on.

As the book opens he is fired from his latest berth due to the jealousy of his fellow spacemen, who can't match his job performance. He is on the world Tome, which seems to be a near utopia -- very orderly, beautiful, with one odd feature -- everyone wears masks. After a brief time, though, he realizes he has no way of making money. A civil servant brings him in and informs him that his only option is to agree to play a mysterious Game.

Mike originally refuses, and soon encounters a beautiful "professional woman" (i.e. prostitute) who is also marooned on Tome, and who has also declined to play the Game. They hatch a plan to steal some of the masks, which are apparently (and incredibly implausibly) very valuable off-planet. This goes awry, though, and they are arrested an informed that the only way to avoid punishment is to finally agree to play the Game.

The middle section of the novel recounts their experiences in the Game, which is a strange simulation, by all evidence in the book likely fatal to any normal person, though Mike's enhancements save his life and the woman's several times. The Game is played in a simulated city and was vaguely reminiscent to me of the Game of Life (board game, not the computer game): you gain credits such as "education" by randomly hitting certain squares. But sometimes instead of credits the squares will shoot knives or poison gas or something. By the same token, the simulated cafes will sometimes serve food and sometimes poison.

At any rate, the two finally refuse to participate, causing much consternation. Before long they are involved in a cynically (and I suppose realistically) portrayed revolution, which leads to a fairly honest but very disappointing and flat ending.

The best parts of the book are the characterizations of Mike and the woman. Mike in particular seems real and different. And the story does hold the interest for a while, but then goes flat. The economic underpinnings of Tome simply don't make sense, and the ultimate revelation of what lies under the masks is silly. A novel that shows some perhaps surprising ambition, but not really a very good one.