The Only Novel by a Great Playwright: Lord Malquist and Mr. Moon, by Tom Stoppard

The Only Novel by a Great Playwright: Lord Malquist and Mr. Moon, by Tom Stoppard

Something a bit different this week -- a fairly little known though probably not forgotten novel by a great great writer -- but a writer known for his plays. This is something I wrote some years ago, a rather brief review, but I like the novel, and Stoppard is such a great writer I thought it worth bringing one of his more obscure works a bit of attention while I finish my latest true "Old Bestseller". (I should perhaps add that K. A. Laity discussed this in a Friday's Forgotten Books post some half-dozen years ago.) 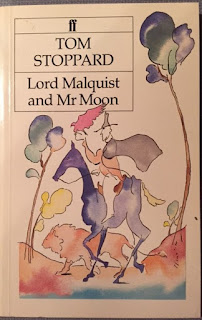 Tom Stoppard was born Tomas Straussler in Czechoslovakia in 1937. His Jewish family fled Czechoslovakia as the Nazis invaded, ending up in Singapore, then India. His father was killed in a Japanese attack or perhaps as a prisoner of war, and after the war, his mother remarried an Englishman, Kenneth Stoppard. He became a journalist at age 17, fortuitously becoming a theatre critic soon after, which lead to an ambition to write plays, He wrote some radio dramas in the '50s, and his first stage play was completed in 1960. He wrote the first version of Rosencrantz and Guildenstern are Dead with the help of a Ford Foundation grant in 1964, and it was first produced in 1966, making him a star. He has written many many plays since then, and also translated many, written some screenplays including work on Indiana Jones and the Last Crusade, Empire of the Sun, Brazil, and Shakespeare in Love.

And one novel, very early in his career (1966): Lord Malquist and Mr. Moon.  I've read Rosencrantz and Guildenstern are Dead, The Real Thing, Arcadia, The Real Inspector Hound, and a few more plays. I've seen a television version of Rosencrantz and Guildenstern are Dead, but never seen a Stoppard play live, which I'll have to fix sometime. I've really enjoyed every play I've read by him.

Stoppard's plays are known for virtuoso word play, and this is a feature of Lord Malquist and Mr. Moon as well.  (Add Stoppard to the list of English-language writers who grew up hearing another language (Czech, in his case) and who write flashy or otherwise special English prose. (Others: Conrad, Nabokov, Rushdie.))  The story is told mostly from the viewpoint of Mr. Moon, a rather hapless young man in London in 1965 (at the time of Churchill's funeral). He hopes to write a histoy of the world, but isn't making much progress and needs the money, so he takes a job as a professional "Boswell" to Lord Malquist, who desperately wants something to be named after him, in the manner of the Earl of Sandwich or the Duke of Wellington, or MacAdam.  Malquist wants Moon to record his bon mots, and indeed Malquist's speech is quite witty.

Mr. Moon has a rich wife, who refuses his sexual overtures, but seems to give herself to pretty much anyone else, and who seems to be running their house as a sort of brothel, for which purpose she has engaged a pretty French maid.  Into this mix are thrown Malquist's alcoholic wife, his black Jewish coachman, and an Irishman who claims to be the Risen Christ. Oh, and a lion, and a bomb. It's very funny, though very blackly so, and all is resolved quite inevitably.  I really enjoyed it. It does seem though, that with the nearly simultaneous success of Rosencrantz and Guildenstern are Dead, Stoppard abandoned novel-writing for plays -- apparently a good decision!, though I for one would enjoy seeing more novels from him as well as the plays.
Posted by Rich Horton at 6:58 PM