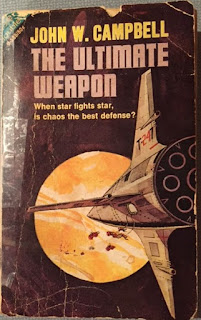 Here's another Ace Double featuring an extremely significant figure in SF history. John W. Campbell, Jr. (1910-1971) was born in New Jersey, and lived there most of his life. He attended MIT (getting to know Norbert Wiener) but finished his degree (a B. S. in Physics, the same degree I hold) at Duke in 1932. (At Duke Campbell met J. B. Rhine and apparently participated as a subject in Rhine's ESP studies -- an interesting fact given Campbell's later obsession with parapsychology.) In 1930 he began publishing SF with several stories in Amazing. Early in his career he was known for stories of super-science. He also published a number of quieter and more thoughtful stories as by "Don A. Stuart", including the classics "Twilight" and "Who Goes There?". In 1937 he became the editor of Astounding Stories, and he is probably the most significant editor in the history of SF. It would be fair to say that he moved SF away from his "John W. Campbell" writing persona and toward his "Don A. Stuart" writing persona, though of course that's an oversimplification. He died in the saddle, as it were, in 1971.


After taking over Astounding Campbell essentially ceased writing fiction. His last published story as an active writer came in 1939, with perhaps the exception of "The Idealists", which appeared in the 1954 Raymond J. Healy original anthology 9 Tales of Time and Space (thanks to John Boston for alerting me to that story, which I think I'll have to seek out). There were a number of pieces written in the 30s but published later, such as The Incredible Planet (1949), and perhaps most interestingly, "All", published in 1976 in a collection called The Space Beyond -- but twice rewritten by major SF writers: as Empire by Clifford Simak, and as Sixth Column by Robert A. Heinlein. 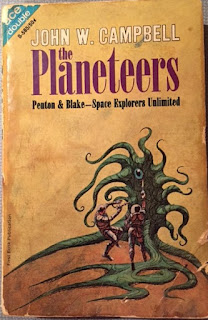 I have quite enjoyed most of the Don A. Stuart stories I've read, and I've been much less impressed by the Campbell stories. This book represents my first fairly extended look at him in that mode.


The Ultimate Machine is actually a longish novella, a somewhat typical size for an Ace Double half at about 31,000 words. It was first published in the October and December 1936 issues of Amazing Stories as "Uncertainty". As it happens, I saw a copy -- may have bought a copy -- of one of Sol Cohen's horrible reprint magazines shortly after I started buying SF magazines: the July 1974 issue of Science Fiction Adventure Classics, which reprints "Uncertainty" in full.


It opens with an Earth scout ship out near Pluto, where they detect an alien ship with very powerful weapons, that easily overwhelms the mines on Pluto and destroys a couple of ships. Buck Kendall, a rich man and great scientist/engineer who has enlisted in the Space Navy, is one who escapes, and he immediately raises the alert. But his Navy bosses ignore him, brushing off what he saw as human space pirates, so he resigns, goes back to private industry, and arranges for some funding from the only smart man in the Navy, Commander McLaurin, to set up a lab on the Moon and start working on better weapons. He has deduced that the aliens are from Mira, and that they will be back at Earth in two years.


We switch to the viewpoint of the alien commander, Gresth Gkae. His race are looking for a stable system to take over, because Mira is a variable star. His ship is one of many assigned to look for new planets, and having found the Sol System he races back to Mira, to organize and then lead an invasion force.


The rest of the story is easy to figure out. Kendall and his cohorts put together some amazing new weapons and ships in an impossibly short time -- the aliens return and are surprised at the resistance they find, but they still seem likely to prevail, until Kendall figures out a way to use the Uncertainty Theory as the Ultimate Weapon. The conclusion is a slight twist, helped by a ridiculous deus ex machina.


All that said, I liked a fair amount of the story. Except for the stupidity about the Uncertainty Theory, the scientific inventions are at least on the border of plausibility (well, across the border, but at least backed by actual 1930s physics) -- Campbell mentions, for example, a weapon much like the neutron bomb. You can kind of see him working the direction he would ask his authors to take at Astounding.


The Planeteers is a collection of 5 stories about Ted Penton and Rod Blake. The stories are:

Penton and Blake have invented atomic power, which is illegal on Earth. (Due to an accident that took out 300 square miles of Europe.) Exiled, they fly their atomic powered ship, which no on can match, all over the Solar System, looking to get rich. They keep encountering strange and intelligent aliens who always turn out to have their own interests that run counter to Penton and Blake's. Penton is the smart guy, Blake the foil.


In "Brain Stealers of Mars", they encounter creatures on Mars that can exactly mimic other creatures, and end up having to decide which of a dozen or so copies of Penton and Blake are the true ones. In "The Double Minds", a race on Callisto that has learned to use the two halves of their brain separately, increasing their mind power but reducing their coordination, has enslaved another Callistan race. Penton and Blake help out the revolution, with unexpected consequences. In "The Immortality Seekers", set on Europa, a fairly benign race turns out to need the Beryllium from which Penton and Blake's ship is made to assist what seems to be nanotech in making them immortal. Another clever creature is enlisted to help Penton and Blake. Then they head out beyond Pluto, to the Tenth World, very cold but inhabited by a very intelligent energy eater that can't control its urges to grab energy from anything hotter. Finally, on the moon of the Tenth World, surprisingly warm compared to its primary!, they encounter a creature that can eat almost anything.


These are silly and kind of annoying stories. The science -- mostly on purpose, to be sure -- is just too stupid, and the supposedly comic interactions of Penton and Blake came off pretty flat too me. Very minor work. Campbell surely made the right decision switching to the editor's seat.