My Best of the Year book

I thought I should mention that my new book is out, The Year's Best Science Fiction and Fantasy, 2016 Edition. It's always fun to see the book in print, and to celebrate a whole bunch of great stories.

I dedicated this book to my late father, John Richard (Dick) Horton.

Apropos of that, I recently put together a spreadsheet detailing all the contributors to my books over the past 11 years. This series began in 2006 as two books: Science Fiction: The Best of the Year, 2006 Edition; and Fantasy: The Best of the Year, 2006 Edition. There were three years in that format, and in 2009 we switched to the bigger combined format, with both SF and Fantasy. (I should note that each edition -- 2006, 2016, whatever -- collects stories from the previous year.)

So here's this year's cover: 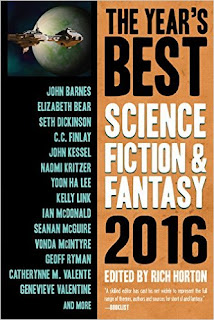 So, as I said, I put together a combined spreadsheet, of 11 years of these book. One of the things I was interested in was how many times I published new writers -- that is, writers whom I hadn't previously published in this series. I confess, I was partly motivated to investigate this because of an accusation by Eric Raymond that I kept choosing authors from the same pool. That seemed on the face of it blatantly false -- I've always prided myself in choosing a lot of unfamiliar writers. Naturally I have favorites, and there are some writers who appear over and over again (most obviously, Robert Reed, though he's not in this year's book!) But I had a feeling I always included a lot of new (to me) voices.

So, about half the writers in a typical book of mine have never before appeared in one of my Best of the Year collections. That seems pretty good! And, in fact, a quick comparison with at least one other editor suggests that my percentage of writers new to me is significantly higher. (Which isn't to say the other books aren't also excellent -- they are!)