Another Ace Double: 200 Years to Christmas, by J. T. McIntosh/Rebels of the Red Planet, by Charles L. Fontenay 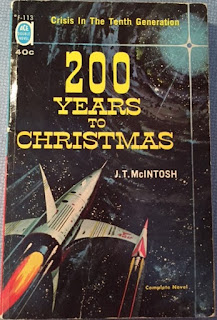 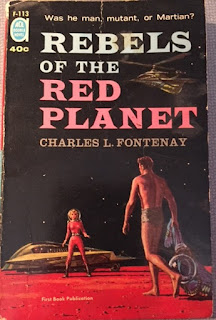 Once again, I don't have a "new" old book to write about, so I'm posting one of my older Ace Double reviews. This one is about two writers who were still alive when I first wrote the review, but who died shortly later. Neither is much remembered, but J. T. McIntosh is a name that's come up in a few contexts recently so I figured this might be worth exhuming.

Neither of these writers is that well remembered these days, though McIntosh remains something of a guilty pleasure for a lot of readers, myself included. McIntosh was a Scotsman named James MacGregor (1925-2008), who originally published as J. T. M'Intosh. His career extended from 1950 through 1980. He was quite prolific, publishing in the neighborhood of 100 short stories and 20 novels, mostly SF but some mainstream work as well. Charles L. Fontenay (1917-2007) was a journalist who published fairly regularly in the SF magazines in the 50s, then had a few more stories mostly in anthologies late in his life. He published a few novels as well. 200 Hundred Years to Christmas is about 28,000 words, and Rebels of the Red Planet about 51,000. The artist for the 200 Years to Christmas cover is Ed Valigursky, I'm not sure who the other one is by, though John O'Neill's suggestion of Ed Emshwiller seems likely.

I've called McIntosh a guilty pleasure, but that's not really fair. In fact he was quite reliably entertaining, and his stories were usually aimed at specific SFnal/societal ideas. Very often, he would advance one particular unusual idea, without necessarily thinking it the whole way through. Often, the overall milieu of his futures was a bit thinly described -- except for whatever specific change he was examining everything seemed just like the 1950s. (He said that was on purpose somewhere, I think.) His plotting was energetic and the stories were usually fun reads. He might qualify as a forgotten SF writer who deserves at least a modest rediscovery. My favorite works by him are from fairly early in his career: the novels World Out of Mind (1953) and One in Three Hundred (1954), and some shorter work (mostly novelettes) from the same period.

200 Years to Christmas originally appeared in Science Fantasy #25, in 1959, probably in the same form (i.e. I doubt the Ace Double is expanded). It's a generation ship story, focusing on the problem of societal cohesion on a generation ship, as such reminiscent of Poul Anderson's "The Troublemakers", Ursula Le Guin's "Paradises Lost", and Stephen Baxter's "Mayflower II", among many other stories.

It is set over a few years at roughly the midpoint of a 400 year journey from Earth to another star. The inhabitants of the generation ship are not sure if human society has survived outside the ship -- they left rather precipitously during a period of considerable social stress. The main character is Ted Benzil, a schoolteacher on the ship. His position is of considerable prestige. As the novel opens he is propositioned by a 15 year old girl ("startlingly nubile") named Lila, but he gently rejects her, in favor of his long term older lover, Freddy Steel. The setup soon comes clear -- the ship's society is going through a libertine phase, but this is ending, to be replaced by a strictly Puritan phase.

During the years of Puritanism, the libertine views of the likes of Freddy Steel become anathema, and Freddy faces humiliation, while others face worse punishment. Ted Benzil is supposedly representative of a knowing middle way, but in fact he comes off as wishy-washy and not terribly courageous. He does eventually lose his job though, and he manages to find enough courage to help push things in the opposite direction, towards greater rationality. And of course he moves in the direction of Lila, while Freddy is presented as excessively libertine, just as the villains are excessively Puritan.

It's not by any means outstanding work, but it does hold the interest, and I found it a fun read. I don't fully buy McIntosh's thesis -- essentially, that society, especially a small and closed society, will inevitably swing from libertinism to Puritanism to rationality and back and forth again, but I thought it at least interesting and fairly thoughtful. I suppose the characters were the weak point -- more labels to be moved as the author desired than real people.

Rebels of the Red Planet seems not to be based on any earlier stories. It is, it must be said, rather a preposterous work. That said, it's smoothly enough written and the heroes are good and the villains are really evull, so I admit I enjoyed the reading despite considerable reservations.

The story is set, no surprise, on Mars. Efforts to adapt humans to live more easily on the planet have been suppressed by evull corporate interests -- if humans could live unaided on the planet they wouldn't be forced to pay the spaceship lines that import material from Earth. But these efforts continue underground -- some focusing on genetic alteration of humans to make them better adapted to Mars, others focusing on developing psychic abilities to, for example, allow teleportation of food directly from Earth.

The story opens with the beautiful Maya Cara Nome accompanying her fiance Nuwell Eli to a suspected outpost of illegal research. Nuwell is obviously evil, and weak, because he is a prosecutor. Maya is obviously good, because beautiful, and also because she was raised by the old Martians, but she is misguided. They discover quite shocking experiments performed by an old scientist, Goat Hennessy, who has vivisected embryos in feeble attempts at genetic manipulation.

Back in a major Martian city, Maya infiltrates a rebel center. There she meets the dynamic and handsome and amusingly named Dark Kensington, who should be in his 50s but seems to be 25 -- with no memory of the past quarter century. We learn that both Maya and Dark have psychic powers. Maya is loyal enough to expose the rebel base, but many rebels escape. Maya tracks down Dark at another city, and falls in love with him. But Nuwell Eli follows her, and she is just weak enough to alert the authorities to Dark's presence. He is shot and killed, and in despair Maya agrees to marry Nuwell after all.

But -- but -- those old Martians are something special! It turns out Dark isn't really dead, and he is able to join with the remaining rebels, the Old Martians, and some other victims just in time to save Maya. Save her? Well, it seems that Nuwell is whipping her to bring her to her senses, and to cure her or her obsession with Dark Kensington. Oh, what a baddy he is!

The resolution is really rather flat, without for instance any satisfying final battle between Dark and Nuwell. And what's with the names? "Dark Kensington"? A deeply silly novel -- in particular the genetic and ESP speculation is just dumb. Its heart is all too obviously in the right place, but its execution is quite lacking.